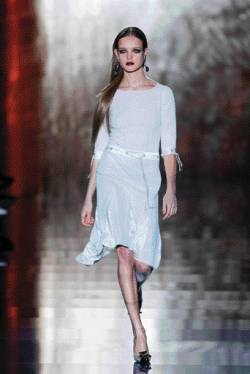 There was plenty of variety in Paris as the spring collections continued, from Valentino’s pretty pink coats and vivid print frocks to Jean Paul Gaultier’s dazzling range of buttoned looks to a surfeit of ruffles in Laurent Mercier’s debut couture collection for Balmain.

Valentino: Valentino is attracting plenty of high-profile fans these days. His friend Ashley Judd sat front-and-center at his couture show Monday night, along with Ines Sastre and French actress Judith Godreche. More importantly, a bevy of dazzling movie stars — Kate Hudson, Cate Blanchette, Laura Linney, Kim Cattrall, Renée Zellweger (in a vintage number) — chose Val as their go-to guy for the Golden Globes. And in New York last week, a gaggle of young socials turned out for a hastily called showing of his pre-fall ready-to-wear collection.

With all this newfound success among the young, beautiful and prominent, it’s surprising that the haute couture collection Valentino showed Monday evening felt not only a tad dated — a mood compounded by pounds of heavy eye makeup — but often too matronly even for the designer’s most loyal customers, who must now share his attention with the newcomers. He opened beautifully, with racy white dresses, coats and suits that skimmed the body before releasing into fluid skirts. But then he became taken with a retro coat-and-pants motif — straight, stiff, silk pants —to the point of obsession, one in which few women are likely to share. Along the way, the appeal of some quite strong coats — for example, those in antique pink silk with shirred borders and a brown floral-printed cashmere?— was lost. Conversely, what women will go for is the color. Valentino showed plenty — numerous girly pinks, sometimes done up with bows; plenty of rich-hued prints and jacquards with a mysterious Eastern allure, and high-voltage geometrics.

And, of course, a Val gal loves a pull-out-the-stops evening frock. While even here, he seemed off balance, he did come up with a stunner or two, including a red shirred-and-flowered dream and some provocative gowns fastened in sterling silver. But then, nighttime is the right time to shine.

Jean Paul Gaultier: Button, button, who’s got the button? No question Jean Paul Gaultier does — thousands of them, in fact — but he’s not playing any children’s game. Remember, this is couture. So for spring, he cornered the market on lustrous pearl buttons and used them liberally on just about everything from little skull caps to button-seamed hosiery. Dresses were striped or edged with them; one pantsuit was completely covered with them, and even his bride hit the runway in a sexy bodysuit all sewn up with buttons. If it all sounds a little gimmicky, it wasn’t. After all, Gaultier is one buttoned-up guy, and he handled his pearlies with charm, elegance and a soupçon of wit.

But the master of the quirky wasn’t as successful with another idea he came up with this season. Instead of wearing a jacket, shirt or pullover the conventional way, Gaultier is suggesting an alternative for his ladies. He concocted these items in slightly scaled-down versions and strapped them on like backless halters. While the concept may sound intriguing, the result was more silly than amusing.

Not to worry. The designer had plenty more up his talented sleeve. He revisited some of his favorite themes, tweaking them enough to make them current and appealing. There was a slew of deftly tailored smokings, and he toyed with utilitarian items, glamming up a jeans jacket with blue crystals, or outsized cargo pants with shimmering khaki bugle beads. But the real triumph here was a voluminous drawstring parachute coat in glazed organza that really flew.

Gaultier knows how to cast any of his odes or idees fixes aside at a moment’s notice. For instance, without a trace of anything but elegance, he rendered a little fitted and gored trenchcoat in black silk that was spare perfection. And he also knows how to deliver those grand couture gestures that demand masterful craftsmanship. Gaultier displays that skill with his patchwork leather spider dress with shredded panels and a laced-up back, and the Degas-inspired feathered and flowered tulle skirt topped with a sequined tunic. Talk about dream-works.

Balmain: With two Balmain ready-to-wear collections under his belt, Laurent Mercier made the leap into couture with his debut collection on Tuesday. And to put it simply, he took quite a fall. Mercier has said all along that he has no intention of following the lead of his predecessor Oscar de la Renta, who brought a sense of rational refinement to the house, and that he would aim for something younger. Fair enough. But what’s so young — or for that matter, new or interesting — about heavy-handed ruffles, sexed-up catsuits and silky harem pants that look like cartoon takes on high fashion?

Mercier, it seems, has found himself in a position that we have witnessed all too frequently in recent years, in which a designer with high hopes and a sense of bravado is thrust onto a stage for which he is not yet prepared. Whether Mercier has what it takes to grow into a serious couturier who can be taken seriously remains to be seen. But one thing is certain: He’s still at square one.