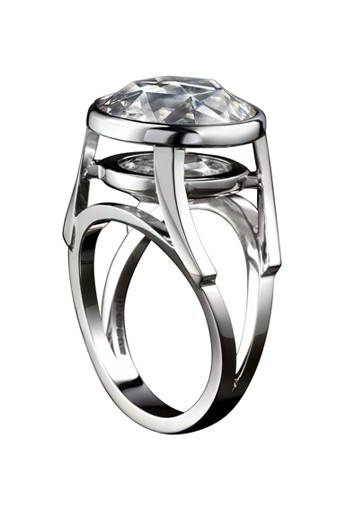 Solange Azagury-Partridge’s involvement in jewelry design began in 1987, three years before the launch of her company, when the London native designed the ring for her engagement to ad exec Murray Partridge. More than two decades later — after numerous accolades, exhibitions, stores and a stint as creative director of Boucheron — she’s coming full circle; Azagury-Partridge will launch her first bridal line, called Tough Love, in May.

“The thing about love is that it’s not all birds tweeting in trees, is it?” says Azagury-Partridge of the name. “Some parts are tougher than others, and, if you want to hold the love, it can be hard at times.” The 30-piece collection has the edgy, eclectic vibe that’s been a longtime trademark. In fact, a number of the Tough Love rings are engagement versions of her signature styles. She has covered her famous Hotlips ring — part of the permanent collection at London’s Victoria & Albert Museum — in icy pavé, while her script rings, which spell “Love” or “Marry me,” come accented with a diamond. And no design is too macabre or unusual for the nuptial treatment. Consider her classic Bones ring, which now sports a diamond in the center; it’s been renamed Till Death Us Do Part.

Her designs are not limited to diamonds, however. “I’ve even mixed in enamel and onyx,” says Azagury-Partridge, who adds that she has deliberately created rings on both ends of the economic scale for “the young loves, who are straight out of college, and the Russian billionaires.” Among the simpler (yet no-less-witty) pieces are her new Carrot rings, which feature one or three tiny carrot-shaped toppers, in gold or orange enamel. “It’s just a little joke, really,” she explains. “You can even have the five ‘carrot’ ring, if you wanted. I could put five carrots there.” The pièce de résistance? The Bi-Di bauble, boasting two tiers of diamonds. “You’re getting two for the — well, you don’t get two for the price of one; you’re getting two for the price of two,” she says. “But it takes as much room as one.” Retail prices for the Tough Love collection range from $1,500 to $226,000.

But this isn’t to say that there aren’t styles for traditionalists, too. Azagury-Patridge has her own take on the standard solitaire; here, however, the prongs are slightly oversized like claws and come embellished with diamonds of their own. Yet another ring offers a twist on the classic prong setting with sculpted hands that hold the stone in the center. “It’s the gesture of a man proffering a gift to the woman he loves, really,” she notes.

To celebrate Tough Love, Azagury-Partridge plans to stage a mock bridal shower on April 30 at her Madison Avenue shop, complete with manicures and massages. As for the inspiration behind the collection, the designer notes her pieces have always been adapted for engagement purposes. One such unconventional example: her “Ball Crusher” ring, which features talons tightly clutching a pearl. “That showed how honest that relationship was. He knew what to expect with a ball breaker,” recalls Azagury-Partridge with a laugh. “You shouldn’t mess around too much with wedding rings. It’s with the engagement rings that you have more fun.”