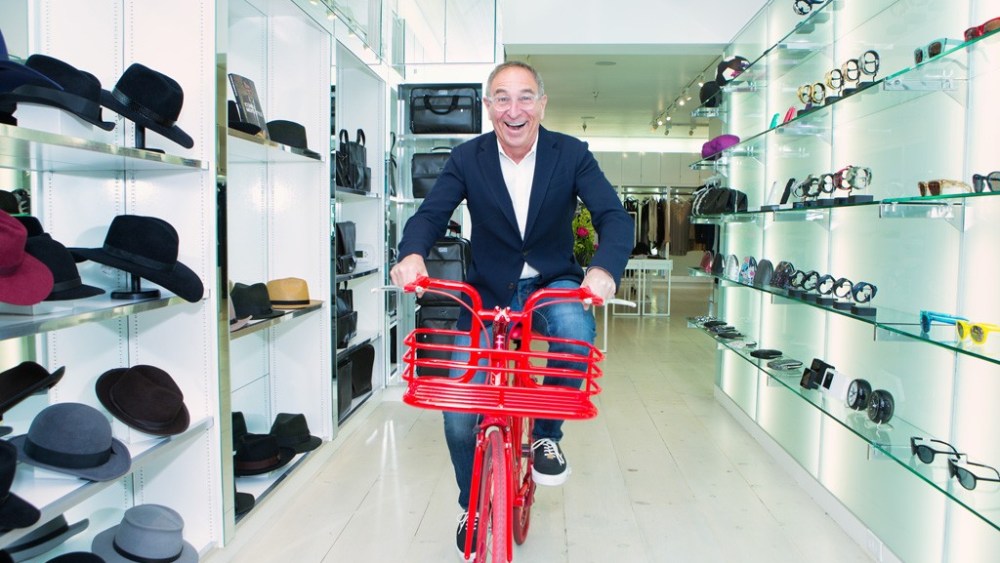 Over more than three decades in retail, Ron Robinson has often reinvented his business — and he is doing so again.

Out of 5,000 square feet under his purview at the Fred Segal complex in West Hollywood, Robinson has carved out about 1,000 square feet for women’s merchandise, marking the first time he has specifically devoted space to the category. He wants to put his uniquely Californian mark on women’s apparel by turning the fitness-inspired, casual style embraced by so many locals into a highly fashionable endeavor.

“Everything we do comes from who your customer is, what they’re doing and how they’re living. They’re living a lifestyle where they’re layering a tank top, a sweatshirt and a pair of jeans, and they’re coming from yoga class to go pick up the kids, and then they’re going out to lunch with their girlfriends, They’re living in fabric with a kind of a softness, and it fits amazingly,” said Robinson. “We don’t want the designers that have already been established. We’re looking to establish new designers and for this directional point of view.”

When he began thinking about introducing women’s, Karen Meena, vice president, buying and merchandising at Ron Robinson, recounted that his instructions to her were to cultivate a strong identity for women’s and take active lifestyle merchandise beyond activewear stores. “Ron wanted to really elevate everything. The store has this really beautiful look and design, and he wanted to use that as a showcase for the type of brand and the level of product we are doing, and also to bring back that feeling of launching new brands, discovering designers, things that no one else has. That’s what I always knew Fred Segal for when I was a kid shopping here,” she said.

Brands in the women’s apparel and accessories mix are Koral Activewear, Cotton Citizen, K/ller Collection, Skin, Elisabeth Weinstock and Gladys Tamez Millinery, as well as Rabens Saloner, a Danish brand with limited U.S. distribution, and Lucas Hugh, which is only found at retail on the West Coast in Ron Robinson. Speaking of Lucas Hugh, Meena elaborated, “When we had our first meeting, Ron said to me, ‘I want you to find a brand like Prada. Think Prada for activewear.’ There’s Stella McCartney and then that’s it. And that’s how we found Lucas Hugh. The finish of it is incredible, and it’s different. Nobody else has it in Los Angeles. It is the right brand for us to launch. Our type of store should launch that type of brand.”

Not only is the women’s assortment new, the physical environment has been updated in about half the square footage at Ron Robinson, including at the women’s section and StylObjects, the interior design outpost. Flooding from the neighboring restaurant had damaged the store’s wood floors, but Robinson sought to keep the wood feel and installed light wood floors that he explained he was attracted to for their “warmer and worn effect.” Lacquered display tables and backlit shelving provide a contemporary contrast to the antiqued floors. Light shades are dominant, and they are mostly along the white spectrum, although Robinson pointed out stark white isn’t used.

Previously at Ron Robinson on Melrose Avenue, the children’s selection stopped at toddler. Now, Robinson has extended that selection upward in age into young boys’ and girls’ clothes in roughly 800 square feet. Bringing playfulness to the children’s area are butterfly and palm frond murals by Christian Lacroix covering the ceiling and walls. The kids’ category is currently Ron Robinson’s biggest (interior design and men’s are running neck-and-neck for second place), and Robinson projected the additional room devoted to the category could inject another $1 million annually to his kids’ revenues at the location.

After working as a buyer under Fred Segal, Robinson transitioned into becoming one of Segal’s tenants, starting with a shop in 1978 focused predominantly on Britannia, a brand that was all the rage at the time. That shop’s men’s wear focus broadened within a few years, and Robinson next opened a kids’ shop. “I was a single man with no kids. I didn’t know a size 12 from a size 2,” he said. “I just knew my customer didn’t want teddy bears and balloons on a onesie. They wanted a black leather motorcycle jacket and a pair of denim jeans that were cool, the same things they were wearing. So, that was my challenge.”

Robinson’s beauty shop Apothia arrived about the same time kids’ premiered. StylObjects entered the picture about 20 years ago, a successor in its space to Treats, a toy, candy and ice cream concept that Robinson tried for two years or so. Walking through his real estate within Fred Segal, he said, “All of these passageways that have a maze sort of effect are because we didn’t build this from the ground up. It was store next to store next to store, and breaking through walls saying this would be a good place to break through.”

The latest recession provided the toughest years in the retail industry that Robinson had ever experienced. “I had been open 30 years, and never done less business one year than the next. So, it was always a growth until 2008, and the biggest thing that dropped in 2008 was our apparel business,” he said. “I really find that that’s a guide to how the economy is working. [Apparel is] the first to go and the first to come back. What we’re seeing is that happen very strong. Our men’s business is very strong. Already, in the few days we’ve been out [with women’s] we have amazing response for what we’ve done. I’m feeling very positive about all of this; I think it’s such the appropriate time.”

Industry sources estimate Ron Robinson’s average annual sales per square foot to be in the $2,000 range within the Fred Segal complex in West Hollywood. Depending on the category, he said January sales increased 8 to 19 percent from last year, and February sales were up 5 to 7 percent from last year. Overall, he noted business is “nearly back” to prerecession levels. “This last Saturday here in the store I had this big déjà vu because there were so many people shopping in the store, we literally didn’t have enough sales help. I’m going, whoa, this is like that time that I remember many years ago,” he said. “What you’re seeing today is not my vision today. It’s the culmination of what we’ve been thinking about for the last couple of years and been able, now, to execute it and come out with the whole look and feel we wanted.”