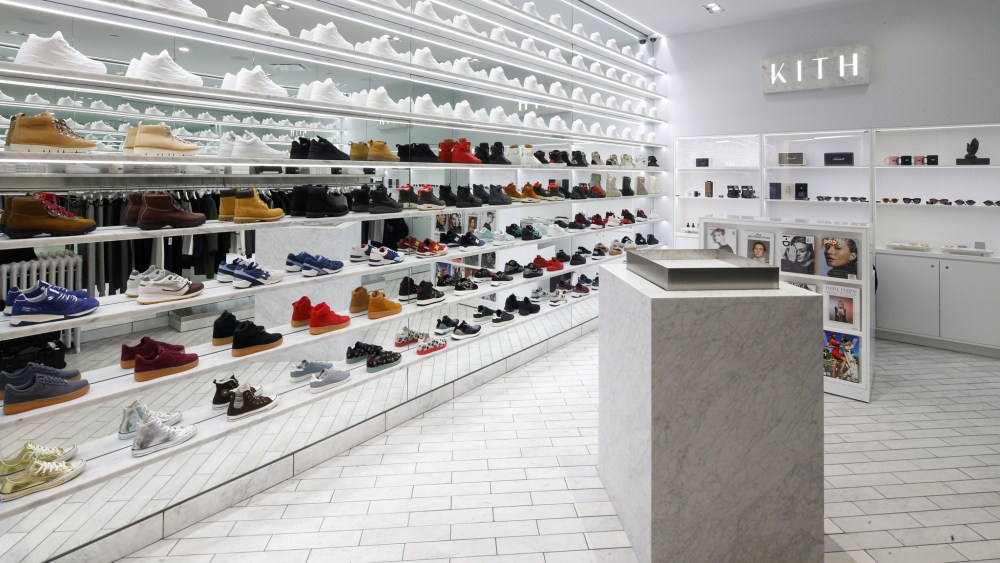 For the past few years the retailer and sneaker designer has wooed male streetwear customers — a persnickety bunch — with his highly sought-after footwear and apparel collaborations, his Kith men’s wear line and his glossy retail stores.

Now he’s hoping to do the same for women with a new boutique dedicated to the female shopper — it’s conveniently across the street from his men’s store in SoHo — and a Kith women’s ath-leisure collection. They both launch today.

“The female customer has been ignored in this market,” said Fieg, who admitted he was nervous about his newest endeavor. “I think women have wanted to have the same opportunity to play in this market and they want something special.”

The 400-square-foot space is stocked with the ath-leisure collection along with an assortment of women’s footwear from brands including Buscemi, Converse, Nike, New Balance, Adidas, Vans and Timberland. Fieg said the women’s footwear offering is five times more than what was available at his first Kith store. Associates will be able to retrieve footwear by using a marble dumbwaiter that lifts product from the stock room. The store also carries magazines; books, including Kim Kardashian’s “Selfish;” RGB nail polish; Illesteva sunglasses, and Miansai accessories.

Although the shop, which was designed in collaboration with Snarkitecture, features the signature design elements found in Fieg’s existing stores — white Carrera marble, fully cast Air Jordan 3’s and a mirrored wall — the overall feeling is decidedly different.

“The space is set up to be intimate. Women need a different a different level of service and store associates need to be able to work closely with them and study their bodies when selling apparel,” he said.

Fieg also opened the store to alleviate the growing foot traffic at the SoHo shop, which expanded last year.

The 15-piece ath-leisure collection, which is designed by a former Public School men’s wear designer, features a new, sleeker Kith logo that’s also on display at the women’s store. The line is made up of ath-leisure staples — leggings, bomber jackets, hoodies and sweatpants — elevated with Japanese and Italian fabrics. Retail prices range from $55 for a bra top to $385 for a bomber-style dress that can also be worn as a jacket. Similar to his men’s line, the assortment will be released in limited quantities across multiple drops.

Ath-leisure is a crowded market, but Fieg believes he’s already established a female customer base with his men’s stores and apparel. He described the Kith female customer as someone who is global, in her young teens to late thirties and wants to wear multifunctional pieces.

The move into women’s is shaping how Fieg collaborates with footwear brands. He said that for 2016 all of his footwear projects will be unisex and he will begin to work on his first women’s-focused footwear collaborations.

This opening follows the renovation of his Brooklyn store, which he said will eventually carry the women’s ath-leisure collection. The next Kith store, which will cater to men and women, will open in Miami. Fieg has a location, but was hesitant to reveal it.