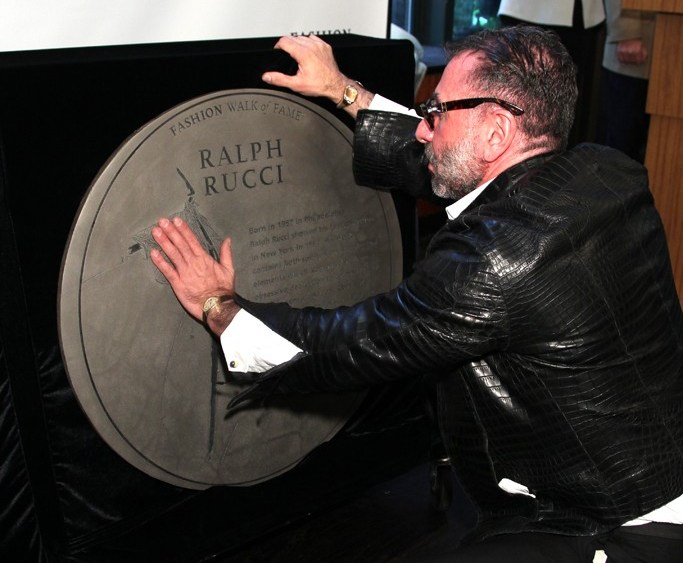 NEW YORK — As the newest additions to the Fashion Walk of Fame, Ralph Rucci and Donald Brooks will always be represented on Seventh Avenue.

Moved as he was to receive the award, Rucci, the designer of the Chado Ralph Rucci label, managed to make light of the situation. Once the applause died down, he told the crowd about the advice Vivian Van Natta had given him the night before: “She told me, ‘Don’t cry, just shut up and tell your story.’”

Harold Koda, Joan Kaner, Marylou Luther, Ruth Finley and Valerie Steele were some of the faces in the crowd that shared the laugh at the Bryant Park Grill Wednesday morning. Organized by the Fashion Center Business Improvement District, the Fashion Walk of Fame celebrates such notables as Marc Jacobs, Calvin Klein, Donna Karan and Halston. “If you don’t know me, I take this so seriously,” Rucci said.

The designer made a point of thanking several people who have played key roles in his 30-year career, most notably Kaner, who picked up the collection during her Neiman Marcus days. In 2002, he became the first American designer in more than 60 years to be invited to show in Paris by the French Chambre Syndicale de la Haute Couture. Fittingly, Rucci also closed his remarks with advice that James Galanos had given him. “He told me, ‘You own this.’ I am going to own this and it will inspire me to do even better work,” Rucci said.

Brooks, who died in 2005, along with Bill Blass and Geoffrey Beene, were known as “the three Bs of fashion.” As for Wednesday’s accolade, his sister Kay Brooks Blick said he would have been “very pleased and a little overwhelmed” by the honor.

After the presentation, the designer’s longtime friend Gerald Blum discussed how Brooks blended his interests in design and theater. Brooks, who was said to have designed 3,500 costumes in his lifetime, won three Coty awards, an Emmy for his costume design in 1982 for Lee Remick’s attire in “The Letter” and three Oscar nominations. “The thing about Donald was he was very much into design but he also had a big sense of theater,” Blum said. “That’s why Adrian and Mainbocher sort of pulled it all together for him.”

When Brooks got word that the 1962 Broadway show “No Strings” would center on a fashion model, he asked Mary Rodgers, whose father Richard wrote the musical score, if his clothes could be featured in it. She promised to arrange that. “When the clothes were shown in a fashion show scene, they were so overwhelmed they asked him to do the costumes,” said Blum. “That was the first time anyone who did fashion clothes did something in the costume business.”