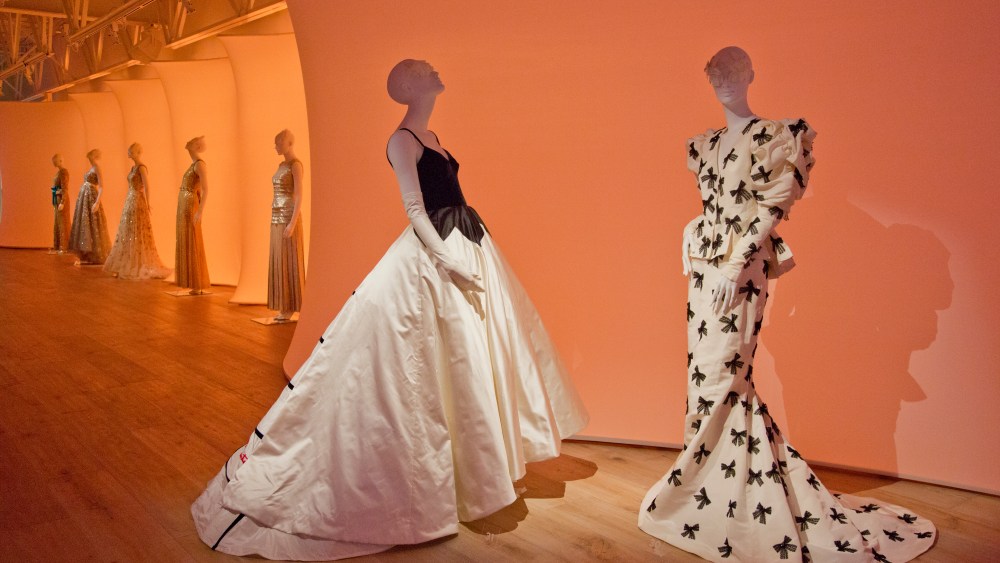 ATLANTA — Considering Oscar de la Renta’s close ties to the Savannah College of Art and Design, it was fitting that SCAD FASH opened its first fashion collection dedicated to the late designer.

The museum, which officially opened Oct. 3 at the school’s campus here, was spun out of 10,000 square feet of space originally used for events, said Paula Wallace, president and founder of SCAD. The full-scale remodeling of the facade and interior began this summer and transformed much of the area into an elegant room that can be modularly changed according to the dictates of each exhibition it presents. Visitors enter by ascending a grand staircase that offers a dazzling panoramic view of the city.

The museum gallery is surrounded by fashion classrooms on two sides and leads into the library-style Film Salon, a lounge for visitors and the Assouline store with merchandise made by SCAD students, a fashion resource library and a collection study and conservation lab.

SCAD celebrated the opening on Thursday with Champagne and hors d’oeuvres as guests toured the collection of Oscar de la Renta creations past and present, including some fall designs by Peter Copping, the fashion house’s creative director, who took the helm in October 2014. Visitors could also watch the film “Ovation for Oscar,” created by SCAD alumni, faculty and students, in the Film Salon. Guests included SCAD graduate Merline Labissiere, whose own creations were on “Project Runway” that same night.

Dresses in the collection included those worn by former first lady Laura Bush, Sarah Jessica Parker, Anna Wintour, Taylor Swift, Maggie Gyllenhaal, Beyoncé and Oprah Winfrey, as well as the wedding dress worn by the designer’s stepdaughter, Eliza Bolen, and the dress worn by his wife, Annette, to the wedding. Many dresses were on loan, but others were from SCAD’s permanent collection. The oldest dates from 1965 and had been worn by the late socialite C.Z. Guest. The newest, a cocktail dress designed by Copping, was his collection’s last outfit presented during New York Fashion Week.

SCAD’s fashion exhibition consultant, Rafael Gomes, explained his vision, saying, “I was trying to keep [de la Renta’s] legacy and what he would like to show and keep it as original as possible. I wanted to show the different facades from Oscar and a wide spectrum, but I also wanted to integrate Peter Copping’s designs and merge them together to show how he’s carrying on the legacy and vision of Oscar.”

Instead of elevating the mannequins, Gomes stood them on the floor, explaining, “The feel for it is better than elevated or behind glass.”

SCAD also has a fashion museum, the award-winning SCAD Museum of Art, at its Savannah location, which presented “Oscar de la Renta: His Legendary World of Style” this year, from February through May.

De la Renta’s ties with SCAD began in 2001 when he was honored as the school’s first recipient of the André Leon Talley Lifetime Achievement Award. Talley, who is on SCAD’s board of trustees, and de la Renta became friends, and the latter gave his time and materials to the school.

The educational side is an important part of the museum, according to Wallace, charmingly dressed in a de la Renta dress. “The students are in a space we want to be inspiring for them.”

SCAD students also are curators and docents for the museum. “It helps prepare them for their careers,” Wallace added. SCAD is incorporating outreach initiatives and curricula guides for visiting school groups for grades kindergarten through 12, and provides resources for graduate scholars. “The combination of fashion and film is very dynamic, and we’ll see that they spark off each other.”

This exhibition runs through the end of the year. The next one, “I Feel Ya: SCAD + Andre 3000 Benjamin,” begins in January.