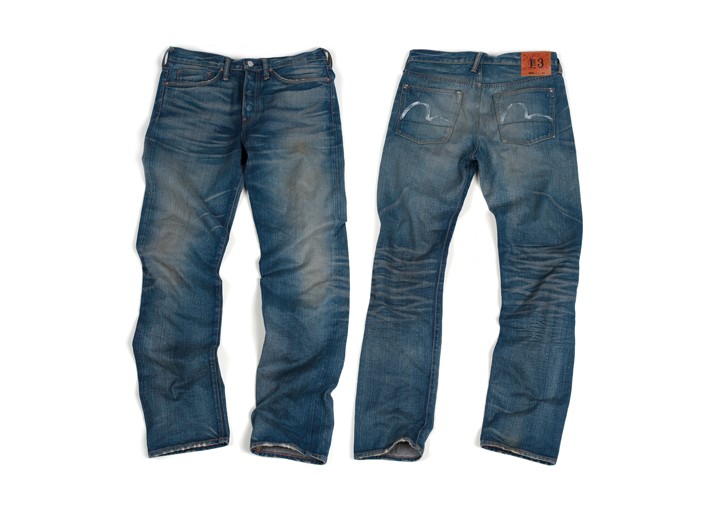 Six months into his tenure as global chief executive officer of Evisu, Scott Morrison has moved rapidly to reposition the denim and sportswear brand and revamp the company’s infrastructure.

The denim veteran, who cofounded the Earnest Sewn and Paper Denim & Cloth labels prior to his current gig, introduced his first new Evisu product exclusively in Barneys New York doors this holiday season, with a small collection of men’s jeans that he rushed through production. The designs depart from Evisu’s previous incarnation as a streetwear-oriented label and moves it toward a vintage, American heritage look, with touches of Evisu’s original Japanese roots.

“I think prior to my arrival the brand had moved away from its roots as one of the best denim makers towards a more sporty, urban lifestyle brand,” said Morrison. “My goal has been to readdress the market of denim purists and make Evisu more about amazing quality, fabrics, washing and details.”

As part of that effort, Morrison has made a number of personnel changes since May, including closing a London-based design studio and opening one in New York, where he has set up headquarters. Eight new designers were brought in, including several from Polo Ralph Lauren Corp. Catherine Holstein, who previously headed her own eponymous label, now oversees women’s sportswear design at Evisu. Ben Smith designs men’s and women’s denim, reporting to Morrison.

Morrison added a new management structure in New York, including two hires from Polo Ralph Lauren: Roy Chan, who serves as president, and Matthew Seligman, who is chief financial officer. Jamee King, previously of Diesel USA, was tapped as vice president of sales.

The company has revamped most of its sourcing operations, adding new mills in Japan and a denim production facility in Los Angeles. Morrison also reorganized partners for about half of the company’s 18 overseas distribution and agency agreements.

Currently, the U.K. and Italy are Evisu’s biggest markets outside of Japan, and Morrison is aiming for the U.S. to join their ranks in the next few years. “The U.S. is the world’s biggest denim market. There’s a ton of potential here,” he noted.

Last year, Evisu posted sales of $30 million outside of Japan and $50 million in Japan. The U.S. contributed less than $4 million in sales.

Following the initial introduction of men’s denim to Barneys, both men’s and women’s denim will ship to select Saks Fifth Avenue and Bloomingdale’s doors in January, as well as about 65 specialty store accounts, including Ron Herman, American Rag, Mario’s, Garys, Kitson, Standard Style and LASC.

“We had been approached in the past about carrying the line but I think it had gone over the edge with all the decorations and embellishments,” said Don Zuidema, co-owner of LASC in West Hollywood. “By toning it down and cleaning it up, Scott has taken it in the right direction. I think the line will be great for that guy who has worn other brands and is looking for something fresh. We’re able to offer an alternative to what people have already been buying.”

There are two men’s denim collections under the Evisu and Evisu Genes labels, with the main line focusing on classic, heritage styles and the latter offering more contemporary, fashion-forward looks. Evisu retails from about $195 to $395 while the Genes range sells for $145 to $175.

For fall 2010, Evisu will debut new sportswear collections for men and women. Retailers will get their first look at them at the trade shows in January and February, including Pitti Uomo, ENK Blue, Project Las Vegas and Coterie.

Like the denim, men’s sportswear will be divided into a main Evisu collection and an Evisu Genes line, while women’s sportswear will all be sold under the core Evisu label. “We’ve maintained the brand’s unique Japanese sensibility, but we’re also making it a little more international and relevant to the U.S. and European markets,” said Morrison of the sportswear.

The men’s and women’s collections feature about 200 styles each, with a little more than half weighted to sportswear and the rest in jeans and denim pieces. Men’s includes T-shirts, wovens, knits, jackets, trousers, outerwear and hats, with women’s encompassing similar categories plus dresses.

“They really are complete lifestyle collections,” said Morrison, who added that final pricing for the sportswear is still being determined but would fall into the young contemporary zone.

Women’s sportswear represents a new opportunity for the brand in the U.S. “We’ve dabbled in it in the past in Asia, but for the U.S. it’s a new entity,” noted Morrison.