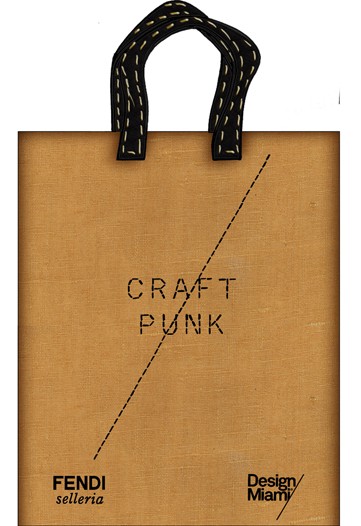 PARIS — How does a luxury goods brand convey craftsmanship in a vivid and compelling way?

Fendi is taking a very hands-on approach this week by enlisting 13 industrial designers to live, breathe and sleep design during “Craft Punk,” an event that kicks off Wednesday during the Salone del Mobile in Milan.

The designers, who hail from as far away as Japan, South Korea and Slovakia, will take up temporary residence in the space where Fendi stages its fashion shows, and have been given carte blanche to create design objects using discarded materials from the Italian brand’s handbag factory in Florence. Also at their disposal will be 10 Fendi artisans who are bringing their sample-making prowess, having spent years transforming the sketches of Silvia Venturini-Fendi into three-dimensional objects by draping, forming, stitching, stretching and finessing fine leathers.

“Craftsmanship is a word that has been terribly abused the last 10 years, just as the word luxury has,” said Fendi chief executive officer Michael Burke, who revealed the creation of the Fendi Foundation for Design, with “Craft Punk” being its first volley.

Rather than creating a permanent museum to display objects, the foundation aims to support young industrial designers in more dynamic ways by giving them a platform for international exposure through high-profile initiatives.

“It’s not about accumulation,” Burke said. “It’s about the making of: understanding what goes into the product, the craftsmanship.…People are ready to hear the story.”

He estimated between 5,000 and 10,000 people will visit “Craft Punk,” organized in partnership with Design Miami. He noted the completed objects would tour the United States and Japan next year.

While scores of fashion brands have hitched their wagons to contemporary art, Burke said he spies more parallels with the industrial design realm, particularly the growing segment of limited edition objects. Both prize high quality, the best raw materials and unique design.

This is Fendi’s second collaboration with Design Miami, having sponsored “Design Talks” at the December fair’s last edition. Burke said Fendi would expand its activities in Miami this year and continue to participate in the Salone del Mobile, or International Furniture Fair. Among designers participating this year are Sarah Becker, Raw-Edges and Kwangho Lee. Burke said the idea for “Craft Punk,” curated by Design Miami director Ambra Vedda, came when one of the participants visited Fendi’s Florence factory and was surprised at how many expensive raw materials went to waste.

Several truckloads of it, including leather, fabrics, threads and metal hardware were shipped to Milan this week, and Burke said he expects it to be transformed into everything from furniture and objects to lighting fixtures.

“There’s no cheating,” he noted. “[The designers] are making everything themselves. They want to get that message out there, too.”