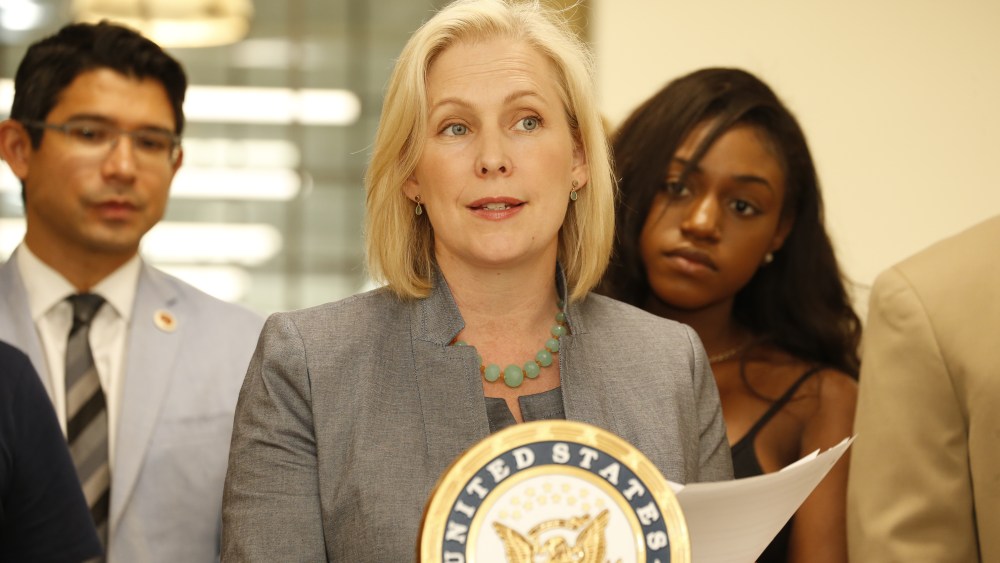 NEW YORK — Sen. Kirsten Gillibrand (D., N.Y.) toured the Manufacture New York facility in Brooklyn on Tuesday and discussed the Made in America Manufacturing Communities Act, legislation she has introduced aimed at creating apparel and textile manufacturing jobs in the borough.

The proposed measure would help grow the apparel, textile and wearable tech manufacturing industry in Brooklyn by creating a permanent program that designates local regions as “Manufacturing Communities.” The designation would put these areas in the front of the line to receive federal economic development funding specifically for the purpose of investing in manufacturing.

Gillibrand explained the Made in America Manufacturing Communities Act would be a continuation and expansion of a domestic manufacturing program that President Obama created that designated regions throughout the country as manufacturing hubs.

“We all know that Brooklyn has the diversity and talent to earn this honor, and I’m going to work hard in Washington to make sure it gets that designation,” she said. “What this program does is unlock millions of dollars in federal funds for manufacturing initiatives for this region. It’s a great program, but right now it’s not permanent, so when President Obama leaves office, the program ends. We can’t let that happen, so we have to make sure we reauthorize this program for permanent authorization.”

In an interview afterward, Gillibrand said she has bipartisan sponsorship in the House and Senate and hopes to have the legislation passed in the lame duck session of Congress that follows the presidential election.

“Who wouldn’t support legislation that is a serious and meaningful investment, that creates jobs and allows us to revitalize communities?” she added.

Bland said the mission of Manufacture New York is to reawaken and rebuild America’s fashion industry, foster the next wave of businesses and create a transparent, sustainable global supply chain.

About two years ago, Manufacture New York moved to Liberty View Industrial Plaza in Sunset Park and partnered with the City of New York, the Mayor’s Office and New York City Economic Development Corp. through a $3.5 million grant to create the Manufacturing Innovation Center for Apparel, Textiles & Wearable Technology.

“The Obama administration has worked diligently to establish a national network of manufacturing innovation institutes, one which we are proud to be a part of, the Revolutionary Fibers and Textiles Manufacturing Innovation Institute,” Bland said. “Manufacture New York would greatly benefit from the bill Sen. Gillibrand is proposing. Fashion design and manufacturing jobs are more than just jobs. They’re inclusive pathways to meaningful careers and potential for business ownership, regardless of previous educational background or socioeconomic status.”

Gillibrand said her bill would help create apparel and textile manufacturing jobs in Brooklyn by creating a permanent program to competitively award regions with the “Manufacturing Community” designation. The designation would give those communities preferred consideration when applying for up to $1.3 billion in currently available federal economic development funding for manufacturing.

The proposal would be coordinated by the Commerce Department and bring together the resources of multiple federal departments and agencies involved in economic development to better leverage federal programs and resources behind locally driven manufacturing strategies.

In order to earn the designation, communities have to demonstrate the significance of manufacturing already present in their region and develop strategies to use the designation in making investments in workforce training and retraining, advanced research, infrastructure and site development, supply chain support, trade and international investment and operational improvement and capital access.