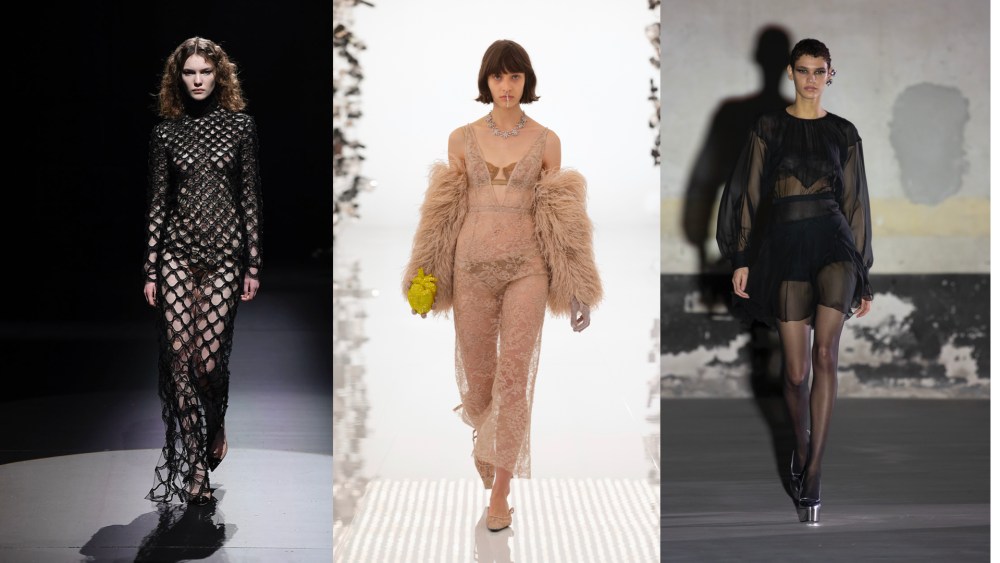 MILAN — From loungewear to lingerie, the step is short but decisive.

After a year seeking comfort wrapped in cocooning silhouettes and cozy textures, women are ready to metaphorically shed their skins — to show it.

This was suggested by many designers in their fall 2021 collections, in which they instilled the art of seduction and the craft of overlaying delicate laces, transparencies and revealing cutouts.

Alessandro Dell’Acqua played with the concepts of bourgeois and boudoir in the lineup he presented for No. 21 in February, balancing subtle eroticism and discretion with silk and lace lingerie peaking from under jackets, fringed dresses and chiffon frocks. “Precisely due to these enforced chaste times, I wanted to make a collection that is not chaste at all,” said the designer at the time, when he imagined a wardrobe for women that “want to be seen” again. He reinforced the commitment by launching an underwear capsule collection last month.

Lucie and Luke Meier also imbued a positive energy in their fall collection for Jil Sander, flanking the pristine silhouettes of suits and coats not only with colors and patterns, but also with sensual slipdresses adorned with sophisticated lace inserts, which evoked the ’90s.

The mood also inspired the work of a slew of emerging designers from London to Milan, who put their own spin on the sensual trend. If Alessandro Vigilante’s enhancement of the human body came via minimalism in body-hugging silhouettes, deep slits, geometric cuts and contrast in fabrics — including Neoprene and vegan latex — Andrea Adamo, founder and creative director of emerging brand AndreaAdamo, deployed his signature knitwear, crafting sinuous shapes in ribbed cardigans, soft corsets and off-the-shoulder dresses, all rendered in a palette of skin tones.

But there was a reassuring quality to the many ways sensuality was channeled, since it originated from the same intimate, domestic dimension as loungewear.

“They are dresses supposed for private moments and for the private self,” noted Melissa Marra-Alvarez, curator of education and research at The Museum at FIT. “It’s an act of indulgence: You’re bringing the indoors outdoor, you’re bringing the private public and so I think that the ideas of embracing freedom and empowerment and sensuality just resonate with so many of us stuck in our homes.”

Emanuela Mora, professor of sociology of communication at the department of political and social sciences of Università Cattolica del Sacro Cuore in Milan, also underscored the correlation between the trend and the current situation, with people forced to rediscover their domestic environments as a result of pandemic-induced lockdowns.

“The enhancement of sensual clothing is an expansion of the intimate dimension and the time spent at home,” she said. “It’s true that these dresses are designed to be worn for going out, but they represent a [development] of what we saw last year, that loungewear trend, which has a comfortable quality, but that now has scaled up a notch.”

According to Mora, women are “reprising contact with corporality” and “rediscovering the pleasure of sinuous shapes that are compatible with their own intimate sphere and decide to carry them around because they are able to manage these shapes, because they move in a world where the affirmation of the right to dress as you want must absolutely be defended and vindicated.”

This kind of attitude and awareness backs the spectrum of takes on the theme, with some extending to party-wear territory. Cue the Gucci Aria collection in which Alessandro Michele picked up on Tom Ford’s seduction story from the ’90s and early Aughts as part of the brand’s centenary celebrations. Presented last month, the lineup was filled with see-through numbers, including a statement sheer blush lace and feather gown revealing a bra and panties underneath. Logoed sheer bra and laced dresses and corsets added to the range, in which the house horse bit was additionally turned into fetish-y harnesses for heightened seduction.

“Lingerie had a moment during the pandemic, but it wasn’t just about comfy basics and sweatpants. We actually saw that women were buying seductive underwear, racy sets, garter belts, and even bondage-inspired lingerie. It is a highly emotional category and women saw lingerie as the new occasion wear,” offered Patricia Maeda, director of women’s, intimates, and swimwear at New York-based trend forecasting firm Fashion Snoops.

“We can’t forget that sensuality plays an essential role in feel-good fashion,” Maeda said. “As we come to understand the psychological effects of sensual dressing on boosting confidence and lifting spirits, this new sartorial trend seems to be perfectly timed with consumers’ desires.”

According to fashion curator and historian Pamela Golbin “in general people just want to find their bodies again” and sensual dressing is just one of the ways to temper and react to what they have lived over the last year.

“I think that there is also a proudness now of showing the body, it’s almost like a ‘I feel good in my skin’ statement. It’s about feeling comfortable with who you are,” said Golbin.

To this end, the sensual imagery presented in the latest collections was indeed charged with a refreshed sense of self-confidence and ownership of the body, which determines a significant difference compared to other moments in fashion conveying similar trends.

If in the past fashion contributed to turning bodies into objects of sexual desire, this time the sensual aesthetic was stripped down of its most controversial elements, leaving room to nuanced interpretations — from delicate to cheeky, romantic to pragmatic — rather than imposing univocal, male-gaze-filtered codes.

Even when embracing a voyeuristic approach to fall 2021 collections, designers presented women as subjects, not objects, consciously choosing to show themselves, reclaiming control over their bodies and fashion choices.

Once again this approach fits into the cultural landscape, which has been reshaped by the pandemic and by the seismic shifts generated by the #MeToo movement since 2017.

“[This trend] doesn’t mark the passing of the #MeToo movement, we definitely didn’t leave it behind but actually we’re going through it and taking a step further,” said Mora. If Dior’s spring 2017 “We should all be feminists” T-shirt anticipated seasons of social and political messages spelled loud and clear on the runway, now fashion looks to deliver ethical values with a more subtle approach.

“It’s this return to sensuality but on new terms, new grounds,” said Marra-Alvarez, forecasting that today’s iterations of the trend will be interpreted “championing body positivity and celebrating all fits and sizes.”

Celebrating “sensuality as an attitude,” Pierpaolo Piccioli made a subtle statement — both romantic and libertarian — about owning the body at Valentino, his models almost always bare-legged. Nets were a recurring theme, appearing on diamond-patterned sweaters, minidresses and second-skin turtlenecks worn throughout the collection.

“The clothes that are being shown today, even though some might be a little more revealing than a couple of years ago, the skin that’s being shown is very different, it’s a very different statement today than it might have been several years ago,” Golbin argued.

Young generations, especially Gen Z, have been particularly vocal about self-love, self-care, and body positivity which suggests they will look at the sensual dressing trend through a new lens.

Maeda contended that “paradoxically, known as the social justice-oriented generation, [today’s consumers] are developing their own definition of sexy, turning sensuality on its head by reclaiming hyper-sexualized fashion items to bring visibility to issues like sexual freedom and empowerment.”

Yet Olivia Spinelli, coordinator and creative director of the IED fashion school in Milan, stressed that designers empowering women through sensuality are not new to the fashion industry. “Yves Saint Laurent was the first to recognize and give voice to a type of woman who dressed in a feminine and sensual way without making her become an object and remains to this day the figure who reinvented the female wardrobe in a way that is exquisitely current,” she said.

If in today’s landscape sensuality was viewed as an aspirational and visually engaging response to months of confinement, Golbin also believes that longing for renewed physical interaction played a part in designers’ creativity.

“I think that these specific collections that are coming out, for me, they represent this natural desire that’s been creeping up on us now that’s been over a year of successive lockdowns,” Golbin said.

Textures deployed by designers to craft their collections for fall suggested the same desire for human contact and touch, since they didn’t only play with transparencies to stir the imagination visually but also with fluid, silky fabrics, laces, embroideries and decorative appliqués to incite tactile sensations.

“It’s just an intuitive embrace of the body and people around us. It brings us to a very essential need, which is touching [each other],” Golbin offered.

Are the Roaring Twenties 2.0 Around the Corner?