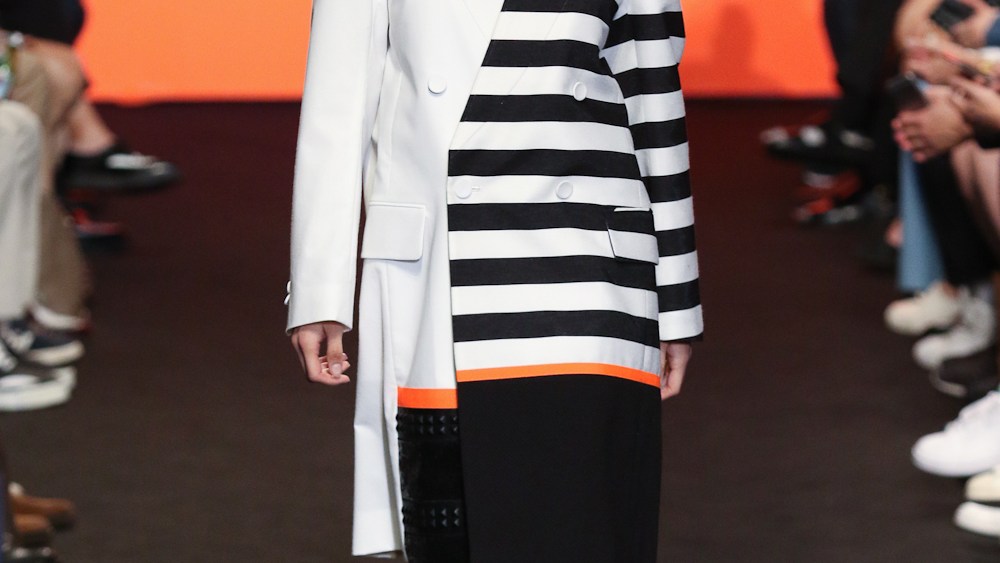 Seoul Fashion Week, which capped its seven-day run here on Oct. 21, featured wide range of ready-to-wear, streetwear and contemporary collections by local Korean brands and designers. Crowds of vividly dressed local and foreign fashionistas, buyers, editors, bloggers and fans gathered at the Zaha Hadid-designed Dongdaemun Design Plaza to check out the spring 2016 collections from internationally lauded designers such as Munsoo Kwon and J Koo, as well as those from up-and-comers such as Pushbutton, Ordinary People and D.Gnak.

Local celebrities and K-pop stars, including Sandara Park, Victoria Song from f(x) and Park Shin-hye and Sooyoung from Girls’ Generation, were spotted at certain shows. Models Kim Won-joong, Irene Kim, Hye Park and Hyoni Kang walked most of the biggest ready-to-wear shows for brands such as Caruso, Low Classic, Jain Song and Surreal But Nice. Actors and celebrities were also spotted on select runways; they included actor Oh Ji-ho, modeling a scarf and suit with designs that resembled etchings on graphite paper, for men’s wear collection Songzio.

Mainstream Korean style is known for achieving a delicate balance between draped, flowing, oversize shapes and a sense of structured classicism with basic colors and crisp tailoring. Seoul Fashion Week offered many similar renditions of this look, with designers such as J Koo, The Studio K and Low Classic embodying a looser Calvin Klein-esque aesthetic.

Street style was a major influence for many contemporary designers at SFW. Kye’s latest collection, by American-born Korean designer Kathleen Kye, showcased some of the boldest usage of colors, patterns and shapes; the word “Hate” emblazoned in lettering across sweatshirts and other clothing was a key motif. At Heich es Heich by Sanghyuk Han, a local child actress and models in Darth Vader and Stormtrooper costumes playfully accompanied a collection of half-striped, half-color-blocked blazers.

Performances were key at D.Gnak, a men’s wear line by Kang Dong-jun, where the show was kicked off by an unveiling of D by D, the designer’s younger streetwear collection, as local hip-hop group Young Vinyls rapped in a mixture of Korean and English while models strolled by.

On the street-style front outside DDP’s main halls, hip-hop-inspired oversize jean jackets with acrylic “graffiti” designs were popular, as were brightly patterned onesies and bomber jackets — a major favorite in Korea for the past few seasons. Wide-brimmed hats in a variety of muted, fall colors were also popular, although black seemed to be the most ubiquitous.

More than 60 shows were held over the course of seven days, with most ready-to-wear shows taking place in the main hall areas within the spaceship-like dome of the DDP. The Seoul city government and the recently-established Seoul Design Foundation hosted the event. Hera, a skin-care and cosmetics brand owned by Amore Pacific, was the main sponsor.

The season was mainly characterized by the Korean modern classic look and street style, said Kuho Jung, director of Seoul Fashion Week and the Seoul Design Foundation. “One [element] is pop culture — there are a lot of K-pop stars attending and designers are very much influenced by the [street-oriented] culture and music,” he said. “On the other hand, the influences of high fashion, which are more chic and avant-garde [are evident]. At the moment this trend is focused on casual, oversize, chic sexiness.”

Monica Yong, buyer and general manager at The Pieces Hong Kong, said Korean street style is the major trend her Hong Kong and China-based clients will seek out. “[From this season’s shows] I think sporty chic will still be the big trend — like how polo shirts are being made in luxurious materials and how suits are being styled with shorts for the summer,” she said. “I have been here for a couple of seasons already. I see the improvement and progression of the sophistication of the designs. Especially in terms of the craftsmanship and use of material, they have picked up the skills.”

Nevertheless, Yong also noted that Korean designers still have a long way to go in terms of establishing their own aesthetics. “[It will] take time for them to come up with more unique branding and design personality,” she noted. “From all the shows I’ve seen it’s quite unified in terms of trends — unlike Milan or New York, where there will be certain designers that will have [unique designs].”

Others said they believe that uniqueness aside, Korean designers are bound by the country’s traditionalist norms.

“[South Korea has] always been a very conservative country,” said visiting Korean-American blogger Chriselle Lim. “They do have to keep that in mind when they are designing something, [and] I’m sure they would want to do what everyone else is doing….But they also have to keep in mind that they’re in Korea.”

Added Kuho Jung, from the Seoul Design Foundation, “Korean culture is more conservative than any other Asian cultures in my opinion. But it’s now become a little bit more funkier — K-pop culture is going very strong, and not only designers are influenced by their fashion and style. The young generations are very influenced [as well].”

Nathalie Cazeaud Hillaire, a buyer with Paris-based showroom MC2 Diffusion who said she has been visiting Korea regularly for the past few years, said she thinks many Korean designers showing at SFW are still too young to understand what they have to do to sell abroad. “[Showing in] Seoul offers a kind of recognition for the designer, but abroad it’s different [if you want to succeed]. It depends on what you want to do, if you want to be abroad or be a Korean designer — it’s not the same,” she said.

Several designers at the Seoul shows spoke of the importance of Chinese consumers to the Korean fashion industry.

“There have been many Chinese buyers at SFW, especially this season,” said Choi Jin-woo and Koo Yeon-joo, the husband-and-wife team behind the 2015 Woolmark prize-winning J Koo. “Chinese buyers in the fashion industry is a global trend, I would say.”

Earlier this year, South Korea’s fashion retail sales were greatly impacted when hundreds of cases of Middle Eastern Respiratory Syndrome broke out in the country. The local economy experienced a major downturn following a huge decline in tourism from China.

The Korea Culture and Tourism Institute has said there will be a decrease of $780 million to $1.6 billion in tourism revenue for 2015. Fashion retail sales took a major plunge over the past few months, with tourists and shoppers only beginning to return in late September, after Korea was declared free of the virus.

However there are signs that the Korean retail industry is picking up. According to figures released by the Korean Finance Ministry, Lotte, Hyundai and Shinsegae — major department stores and stockists for many of the designers featured at SFW — experienced a 24 percent increase in sales year on year, in the first two weeks of October.

The Korean Tourism Organization also reported a 30 percent year-on-year increase of 210,000 mainland Chinese visitors during the country’s national holidays from Oct. 1-7. But the government added that there will be a 6.3 percent year-on-year drop in the number of Chinese tourists, to 5.37 million visitors, compared with last year’s 6.12 million, due to the downturn during MERS..