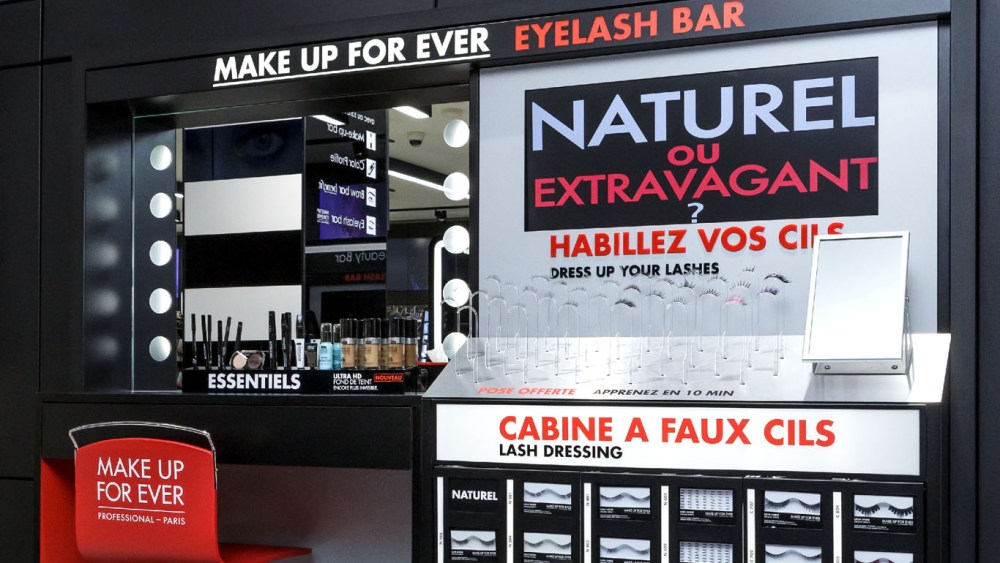 PARIS — Ten years after the launch of its French e-commerce site, Sephora is introducing a smaller and innovative store format integrating online sales.

At 130 square meters, or 1,400 square feet, the Sephora Flash format is only a third of the size of ordinary Sephora stores. Customers can buy 3,500 references from 60 brands in-store and complement their purchase online via touch screens located on walls and counters.

The products are either delivered to the store the next day or sent to the customer’s home within two to five days, with free delivery for purchases of more than 60 euros, or $68 at current exchange.

“We are calling it the first connected beauty store,” said Marie-Christine Marchives, managing director of Sephora France. “When you enter this point of sale, you have the same choice as in our flagship on Avenue des Champs-Elysées, but you shop differently.”

The format, limited to France initially, is designed to bring the cosmetics store chain to areas where it has trouble securing locations large enough to house its traditional stores. Examples in Paris include the Saint-Germain-des-Prés district and Rue des Abbesses, both very popular with tourists.

“The objective is mainly to open in neighborhoods where we were not present,” Marchives explained.

The retailer, a unit of LVMH Moët Hennessy Louis Vuitton, plans to add more Sephora Flash stores from mid-2016 in locations including Paris, Lyon and Lille. In parallel, it plans to continue opening between seven and 10 traditional stores per year in France, its second-largest market after the United States, Marchives said.

Sephora, which has 31 stores in Paris, is set to open in the Polygone Riviera shopping mall in Cagnes-sur-Mer on the French Riviera this week and expects to end the year with some 330 units nationwide, the executive added. She declined to provide figures for online sales.

Clear windows provide a view straight into the store, where a frieze of video screens displays current themes. Shoppers are greeted by a small white robot that instructs them to take a card with a bar code that will act as a virtual shopping basket.

By swiping the card next to a screen, they can select products from Sephora’s assortment of more than 14,000 references online. Once they have made their choice and stated their preferred delivery mode, customers pay for all their purchases — virtual and physical — at a cash register.

The store has no perfumes in stock. Instead, there is a wall of testers where shoppers can sample classic scents alongside fragrances from niche brands such as Serge Lutens, Atelier Cologne, Tom Ford and Juliette Has a Gun.

There is a large selection of Sephora’s private-label cosmetics and skin care, alongside color cosmetics brands such as Benefit Cosmetics, Urban Decay, Burberry, Marc Jacobs, Too Faced, BareMinerals, Make Up For Ever and Nars.

Skin-care brands on offer include Erborian, Estelle & Thild, Rexaline, Glamglow and Dr. Brandt, and there is a section devoted to devices such as facial cleansing brushes, including Foreo’s Luna and Clarisonic’s Mia, and hair accessories, including Daniel Hersheson extensions.

All testers are equipped with NFC tags and can be scanned to display product information on screen. In addition, 15 sales associates are on hand to provide advice, services and help.

“We tried to have a fairly rich and complete assortment that targets every kind of customer, both young and slightly more mature,” said Marchives, noting that the assortment can be tweaked to reflect demand. “We always have to respond to the needs of our customer base, which is very broad.”

Services include a makeover counter featuring the Sephora Plus Pantone Color IQ device, which reads the color of the user’s skin and recommends the foundations best suited to her skin tone; a Make Up For Ever eyelash bar; a Benefit Cosmetics brow bar, and tutorial screens for Formula X nail products.

After a makeover, customers can take their picture using a selfie mirror. Additional services include lockers for charging mobile phones, a gift wrap service and the Mini Beautic sample distributor, where customers can scan their purchase receipt and select which samples they would like to take home.