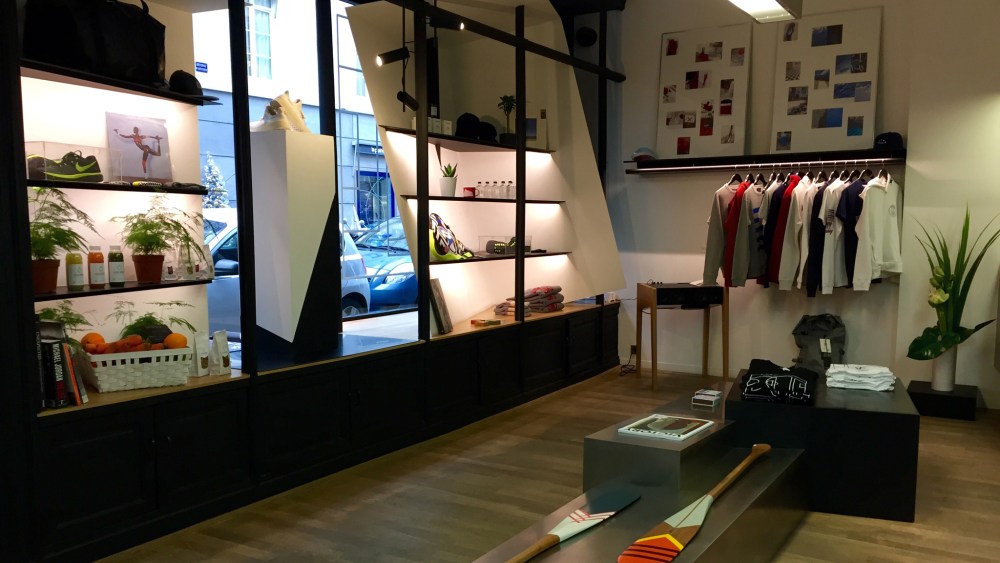 PARIS — A new retail concept for activewear has launched in Paris, Serendipity Sport.

Half concept store, half art gallery, the multibrand venue, founded by brother and sister duo Lucie and Guillaume Leguen, offers a mix of hand-picked labels, one-off products, exclusive collaborations and a made-to-measure service.

“What we have noticed is that while technology and people’s lifestyles have both progressed enormously in recent years, multibrand sports retailers such as Decathlon or Go Sport have not budged an inch since the Eighties,” Lucie Leguen explained. “The stores are antiquated, the selection is basic and the personnel is less-than-well-informed. And so the idea was to present customers with an alternative.”

Her brother Guillaume added that he was “also driven by the idea of giving a platform to brands which are on top of their game in terms of technology and innovation, but are largely unknown to the wider public.”

The sporty duo — both in their 20s — has arranged the offering around urban sports, including yoga, fitness and running on the one hand, and surf and skateboarding on the other. Products have been gathered following suggestions from professionals in various disciplines.

Among the shop’s categories are apparel, accessories, wearable technology, sports equipment, art, books, health juices and other gadgets. Despite a premium offering, prices range between 5 euros, or $5.50 at current exchange, for a pot of surf wax to 4,500 euros, or $4,950, for a custom-made bicycle by En Selle Marcel, a brand which is available here exclusively.

Limited-edition collaborations with Nike and Adidas are also available, along with handcrafted equipment, including a one-off surf board by master shaper Luc Rolland, a former Courrèges designer.

The 970-square-foot store spanning two floors is to remain at 16 Rue Saint Roch in Paris until Jan. 10, which also coincides with the launch of Serendipity Sports’ e-store.

From Jan. 15 through Feb. 20, the duo is to set up shop at concept store Merci before settling down at a permanent, yet-to-be-revealed Paris location in 2016.