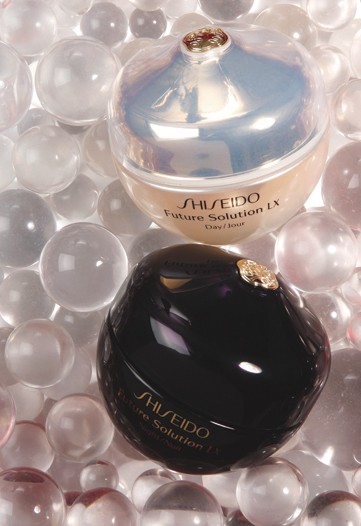 The new line, called Shiseido Future Solution LX, features a newly developed ingredient called Skingenecel. The company’s researchers claim the new amino acid derivative significantly suppresses the skin’s production of the harmful protein Serpin B3 — a byproduct of UV exposure — and makes skin more resistant to the signs of aging. Shinzo Maeda, president and chief executive officer, hailed the new products, set to launch in 5,000 doors this fall, as “the peak of our achievement.”

Shiseido declined to give a sales estimate, but an industry source estimates the line will generate global sales of $100 million in its first year.

Shiseido launched a precursor to the new line back in 2002 with Future Solution Total Revitalizing Cream, an antiaging cream featuring capsules of nutrient-rich sea algae. That product, which retailed for $220 per 1.8-oz. jar, hit a new price level for the brand. A lip and eye cream was also developed but the Japanese company never spun Future Solution into a full-fledged product range. The new Future Solution LX, which will be Shiseido’s most expensive skin care line, consists of four products: a 125-ml. Extra Rich Cleansing Foam, retailing for $60 or 45 euros; a 150-ml. Concentrated Balancing Softener, retailing for $100, or 76 euros; a 50-ml. Daytime Protective Cream with SPF 15, retailing for $240, or 182 euros; a 50 g. Total Regenerating Cream for night time, retailing for $260, or 197 euros.

Nick Knight shot the line’s advertising campaign featuring a gold-flecked image of Raquel Zimmermann. It will break in fashion magazines this fall.

With a recession afflicting much of the world, it may seem like an inopportune moment to push $240 face cream, but Maeda said the launch is in keeping with an ongoing “polarization” of the world’s $249 billion cosmetics industry. While customers buying midrange products are hunting for bargains and cutting back, prestige shoppers are still willing to spend ­— at least to a certain extent, he said. “Surprisingly enough, high-end customers are proving to be strangely resilient,” Maeda said, admitting that prestige skin care sales growth in Shiseido’s core Japanese market has slowed to just 1 percent for the fiscal year ending March 31. “But it’s still growing, which is important. We’re still one percent over last year.” Overall business remains very tough. Maeda said the global cosmetics market, which has clocked in 4 or 5 percent annual growth in recent times, is looking flat this year.

“This year, 2009, I think is going to be really an issue of seeing if we maintain the previous year’s level or not,” said Maeda, adding that he’s hoping for a brighter 2010.

Still, some analysts have warned that Shiseido is underperforming an already weak market.

“We think Shiseido is losing market share in the high-, mid- and low-price brackets,” Goldman Sachs analysts Katsunori Tanaka and Yoshi Okubo wrote in a recent report. “Smaller niche brands are doing well in the high-end segment, while competitors’ products, discounted by retailers, are taking share in the low- and mid-price brackets.”

To wit, last week Shiseido issued a profit warning for the fiscal year ended March 31. Citing lower-than-expected cosmetics sales in Japan, the company slashed its forecasts for net profit and revenue by 30 percent and 1.4 percent respectively. Net profit is now seen coming in at 21 billion yen, or $210 million, on turnover of 690 billion yen, or $6.9 billion. Results are due April 30 and executives are in a blackout period.

Carsten Fischer, Shiseido’s corporate executive officer overseeing the company’s international business, said the new premium skin care line marks the Japanese company’s return to a segment of the market it created with its first Future Solution in 2002. “This was the first high-priced skin care product from a major cosmetics [company]…so we kept this product and it grew nicely but the competition basically discovered [the segment] and they really launched lines out of it. We were very good in bringing it up, but we were maybe not as good at leveraging it over time,” he said.

Fischer said he is hesitant to give financial forecasts in the current climate but estimated Shiseido’s global brand products to be a $1 billion business in a couple of years and Future Solution LX will represent about 10 percent of that turnover.

“We believe that is feasible for that brand and that will not take that long,” he said. Shiseido estimates the global market for prestige skin care items, excluding sun screen, grew 7.7 percent last year to $26.5 billion.

Shiseido executives said the premium Future Solution LX line, along with the recently launched line of Shiseido Perfect Rouge lipsticks and lip pencils, are a major step forward in developing a cohesive global brand image. Next up, the company will work to revamp its other skin care lines in similar fashion.

“Until now, it’s been like each independent line that we’ve produced has been behaving more like a brand. But the idea is to pull them all together and really reemphasize that we all belong to the same brand family,” explained Hiroshi Maruyama, general manager of for international marketing and business.

In keeping with that philosophy, Shiseido unveiled a revamped beauty counter featuring low counters in black glass, video displays and structures made of textured red steel designed to resemble kimono silk. Products are grouped in a white box-shaped display according to their function, such as antiaging, brightening and hydrating.

Fischer said converting older formats to the new, sleeker model will take a “significant” amount of time because the process hinges on department stores’ renovation plans — some of which have been postponed in the current downturn. But in the longer term, the new look will help the company make a clear, articulated pitch to shoppers.

“We want to improve the experience of our consumer,” he said.