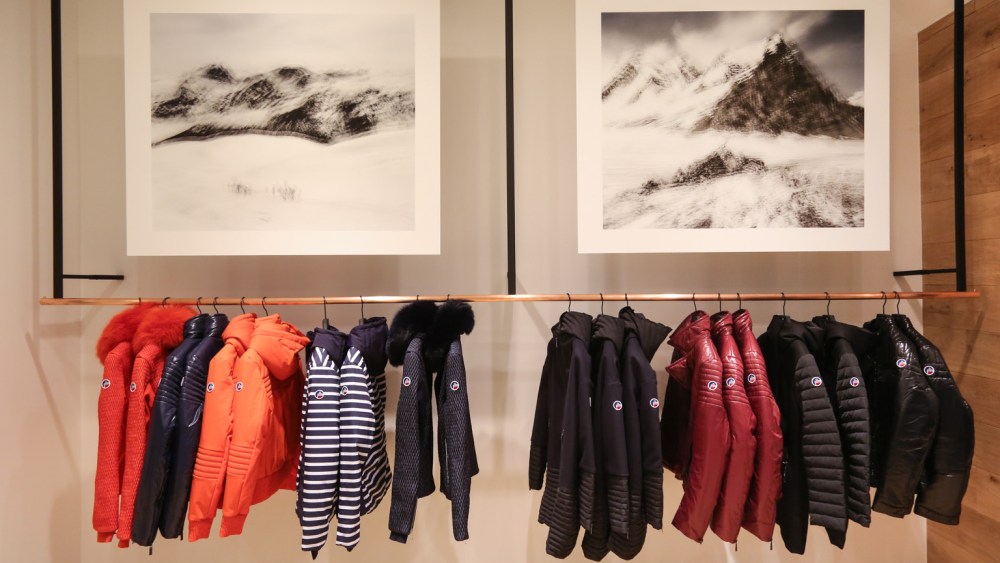 PARIS — A vintage ski lift cable booth, still bearing the doodle from the skiers it used to schlep up the mountain, is the first thing customers notice about the world’s first flagship by Fusalp.

Both boutique and booth are part of a new strategy, following the 2014 acquisition of the skiwear company by members of the Lacoste family, in an attempt to breathe new life into the dormant brand.

“We thought the store should be like Fusalp itself: sporty with a ski spirit and a welcoming place, where we offer people a cup of tea at a nice table. It’s not meant to be too commercial,” explained chief executive officer Alexandre Fauvet, taking a seat in the cable booth.

The 1,300-square-foot store, located at 9 Rue des Blancs-Manteaux in the Marais district, has what one would expect from a modern Alpine chalet: there are large wooden benches, ski lift seats, sculptural racks made of solid oak and tables conceived by Parisian industrial designer Charlotte Perriand.

Fauvet said the unit is the first in a series of new retail outlets set to roll out around the globe. “We have strong ambitions for the brand’s development. We are opening three corners in Japan this week; we are also going to test the market in Seoul, and, for next winter season, are in talks for a major retail plan in North America,” the ceo said.

Following the success of its pop-up in Verbier, Switzerland, which the label kept as a permanent location, a temporary venue in Courchevel, France, is to move to a new location in early December. Earlier this month, the brand also started trading on Net-a-porter.

Founded in 1952 by a family of tailors in Annecy, Fusalp used to rank among the largest skiwear companies in the world, famed for its state-of the art materials and modernist cuts. When the firm collapsed in the early Eighties, it operated five factories and employed 11,000 people.

Vauvet was quick to stress that he has no aspirations to take the label anywhere near its previous size. “We just want to give back to the brand what it deserves,” he said.

Fusalp currently sells through 300 wholesale accounts, with 80 percent of its business based in France, including Colette and Le Bon Marché.

Despite strong currency headwinds and unfavorable weather conditions, the firm logged a 17 percent increase in sales for the year ending May 31. According to the executive, its turnover stood just above 8 million euros, or $9.8 million at average exchange for the period.

To further offset currency fluctuations, Fauvet noted he is eager to move parts of the production back to Europe. “We can’t move everything, because the best factories for technical fabrics are in China, but we will move what we can. Last winter, 90 percent of our production was done in Asia, that number is down to two-thirds this season. And next winter it will be 50-50 between Europe and Asia.”

The Marais flagship will stock the label’s full range of slim-fit skiwear as well as its après-ski ready-to-wear for men and women, now in its first season and designed by Mathilde Lacoste. Comprising a total of 20 looks, the fashion line, which fuses Fusalp’s technical knowhow with street-friendly cuts and natural materials, is expected to double by next season.

“Our ultimate goal is to have the same look and feel across the entire brand. We want the products, which have originally been designed for skiing, to be worn in the city,” Fauvet explained.

To wit: For fall, Fusalp twisted its signature stretch nylon, which is extra-waterproof and breathable, to conceive a bomber jacket skewed to a younger, more fashion-savvy consumer.

Prices range between 500 euros, or $560 at current exchange, for a jacket to 1,500 euros, or $1,680, for outerwear items done with fur or sporting the brand’s signature smocking stitch.

Launching today, the new Marais venue is also expected to stock “like-minded” brands. “These are specialists in their respective fields, their products preferably made in France,” explained Fauvet, singling out eyewear label Vuarnet, which is said to have provided a pair of its vintage Glacier shades to James Bond in the upcoming “Spectre” movie; storied footwear label Heschung, and Edwardson eyewear as examples.

“I don’t want to say it’s a concept store, but that’s the spirit we want to give,” he said.

Rounding off the concept is a corner dedicated to Pulls Montant, the high-end knitwear label that dates back to 1951, which Fusalp acquired in the Seventies but left dormant for more than 30 years.