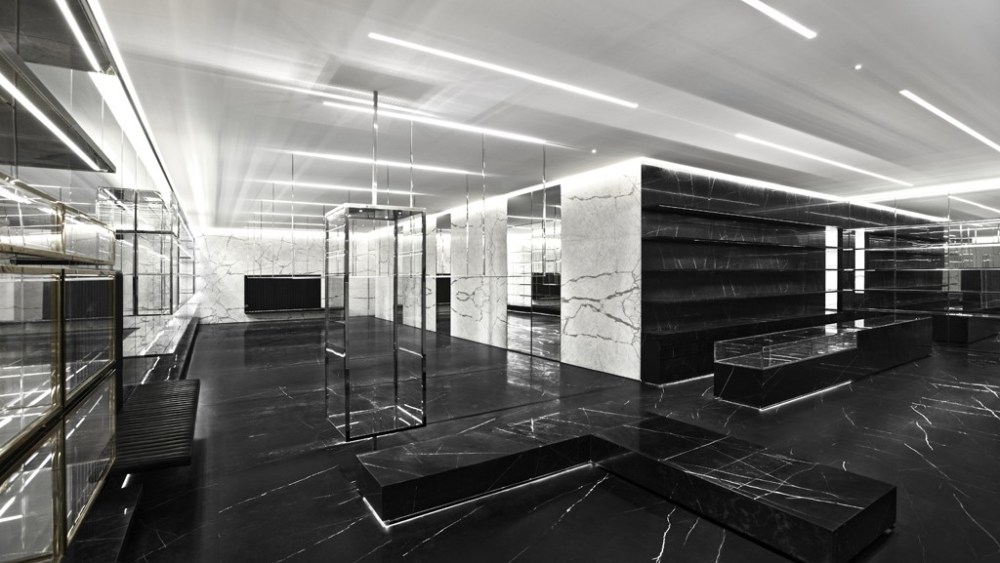 PARIS — To catch a glimpse of Hedi Slimane’s latest and largest handiwork for Yves Saint Laurent to date, there’s no need to wait for his runway show here on Oct. 1 — but you’ll have to hop a plane to Shanghai.

On Tuesday, YSL is slated to open a 3,200-square-foot Saint Laurent Paris boutique in the Reel Department Store on Nanjing Road West. It’s the first unit in the world to reflect a new floor-to-ceiling store concept developed by Slimane, who is applying a 360-degree makeover to the mythic fashion house.

The second Slimane-designed unit, spanning 5,400 square feet, is slated to open in Berlin in November — an enlarged and revamped store at 52 Kurfürstendamm. A 9,600-square-foot, two-level flagship at 53 Avenue Montaigne here is slated for a February opening.

The retail developments were disclosed in an exclusive interview with YSL president and chief executive officer Paul Deneve. He described an ambitious growth strategy designed to seize on the “new creative brand vision” of Slimane and catapult YSL, owned by retail-to-luxury conglomerate PPR, to match the scale of its French couture peers Chanel and Christian Dior.

“That level of business is what we want to build. That’s the potential I would like to develop,” Deneve said, stressing that everyone from the Pinault family, PPR’s reference shareholder, to the rank and file at YSL are united behind that objective. “We’re preparing to revolutionize fashion again, as Mr. Saint Laurent did in the Sixties.”

Plans call for the 51-year-old fashion house to open about 15 directly operated stores and shops-in-shop a year, all under the new Saint Laurent banner, which Slimane chose to symbolize the principles of youth, freedom and modernity that inspired the creation of Saint Laurent Rive Gauche ready-to-wear back in 1966.

“The store concept has been completed, designed and perfected, and is ready for rollout,” Deneve said. “Very rapidly, we will see the overall store network evolve.”

No opening event is planned for the Shanghai store, which will carry existing products designed by Stefano Pilati, Slimane’s predecessor. “By January, everything will be in place,” Deneve said, referring to the collections, store design and other elements of brand identity.

Signaling it is serious about leapfrogging into the big leagues, YSL has set an interim goal of reaching one billion euros in sales before the end of this decade, according to industry sources. YSL revenues in 2011 totaled 354 million euros, or $493.6 million at average exchange rates.

Given YSL’s ambitions to rival the likes of Chanel and Dior in size and cachet, might Slimane return the brand to couture?

“It could be a natural step, but no timetable has been defined,” Deneve said.

To be sure, the executive has his hands full facilitating the change in creative leadership.

Slimane unveiled his first collections — women’s resort and men’s spring 2013 — to retailers only in June, fanning anticipation — and some consternation — among the fashion press. Only images of new packaging, and a spare leather bag named Duffle dangling from the arm of Gwyneth Paltrow, have leaked into the blogosphere.

Lauding Slimane’s fashion perspective, Deneve said “not only has he redefined a strong men’s and women’s wardrobe for Saint Laurent today, but he’s worked on a new offering of shoes, leather goods and jewelry.”

Deneve said YSL carried over certain hit products like the Cabas Chyc bag and Tribute shoes, which were “upgraded and reworked.” In addition, Slimane’s first collection included a “very strong offering” of novelty in accessories that yielded solid orders.

He noted the rtw collection reflects a broader range of prices to appeal to “new, younger clients,” with prices on some exceptional items heading higher.

“Saint Laurent, in order to be successful, is creating a very strong desire through the ready-to-wear: That’s what has been at the heart of our business. We’re one of the iconic names, the ultimate French fashion house. This trickles down to all products,” said the ceo.

That said, Deneve said his objective is to drive all categories to new heights.

“We’re growing strongly in each of the regions since the beginning of the year,” Deneve said, adding that China, where YSL has only half a dozen stores, offers “tremendous upside” potential.

YSL quietly resumed expansion of its retail network in 2010 after battling for years to lift revenues sufficiently to support the 60-some doors constructed during the Tom Ford-Domenico De Sole era, when a radical attempt to engineer a Gucci-esque rejuvenation drove YSL deeply into the red. The company finally posted a profit in 2010.

Deneve noted investments in the retail revamp and other costs would not, thanks to strong revenue growth, interrupt YSL’s recent profitable streak. Sales in the first half rose 46.4 percent to 223.5 million euros, or $290 million at average exchange.

YSL opened five stores last year and the network stood at 89 locations as of June 30.

Deneve arrived at YSL in April 2011 following a three-year stint heading Lanvin, where he oversaw explosive growth for the French brand under creative director Alber Elbaz.

In his time at YSL, Deneve’s most visible move has been to recruit Slimane to succeed Pilati, who had been YSL’s creative director since 2004.

Deneve also described additional transformations behind the scenes, “laying the groundwork for the change” around Slimane, known for his “to the millimeter” approach. These include streamlining product development cycles, deepening merchandising skills “and applying them to make products that are more focused, exclusive and coherent,” Deneve said.

Changes and upgrades in production, and strict quality controls for Slimane’s collections will mean later-than-usual deliveries for the first season, with the first products arriving in January.

For example, he said Slimane’s “quest for perfection,” especially in tailoring, a key trait of the house, meant the company had to invest time and resources to get the fits right. He noted production cycles would be less affected in leather goods and shoes.

Deneve said he was able to shave seven weeks from deliveries, and reduce stockkeeping units in leather goods by about 40 percent. He also shelved what he called “side collections,” alluding to capsule ranges devoted to unisex, eveningwear and travel wardrobes, in order to focus on the show collections and pre-collections.

“For the organization, it’s been an exhilarating moment, but also so intense,” he said. “Hedi has set very high standards, and expects people to meet them. He has such a clear vision, from Day One, about where he wants to go.”