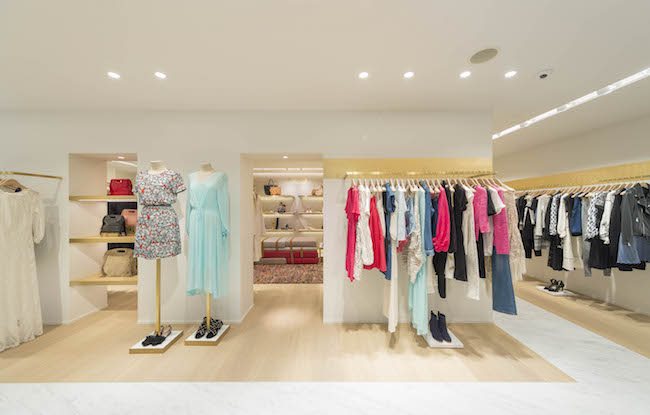 PARIS — Parisian chic — at an attractive price — continues to conquer the globe.

On Wednesday, the fashion chains Sandro, Maje and Claudie Pierlot reported a 19.2 percent gain in first-half revenues, powered by “explosive” growth in China, resilience in France, and a promising start in leather goods and shoes.

“We’re bucking the trend at retail,” said Daniel Lalonde, president and chief executive officer of the chains’ parent SMCP Group, revealing results that outpaced most of Europe’s luxury players, underscoring heady days for the contemporary fashion segment and SMCP’s “affordable luxury” proposition. “We’re at the beginning of the global expansion strategy — with great results so far.”

Like-for-like growth in the six months ended June 30 stood at 9.3 percent, a faster click than the 8.9 percent pace in the first half of 2015. Revenues totaled 377.2 million euros, or $420.9 million at average exchange rates, for the six-month period.

The company trumpeted growth across all brands and regions, with France registering growth of 12 percent “despite a challenging environment.” In an interview, Lalonde said the group’s banners are gaining market share at a morose time for France, with tourist numbers dwindling in the wake of a series of terror attacks.

Sales advanced 26 percent in Europe and the Middle East and 9 percent in the Americas.

Asia-Pacific, led by Greater China, “proved to be an extremely dynamic market” and registered gains of 51 percent, the company said, reporting its first set of results under Chinese ownership.

Lalonde trumpeted strong like-for-like gains in Greater China, where SMCP’s banners have been present for three years and where it operates 85 stores.

Luxury consumers there “understand the value proposition” and “we’re hitting the younger consumers in China” and the “growing middle class, not only in big cities but the top 15 cities in China.” The company recently opened two flagships at Fashion Walk in Hong Kong, hit by a sharp decline in luxury spending, “and they came out of the gate strongly,” Lalonde said.

More than half of sales in the first six months were generated outside of France as the company ramps up its international profile. It opened 58 locations during the period, including 14 in Greater China. As of June 30, the group counted 1,176 stores in 35 countries.

Online sales in the first half increased 104 percent as the group launched online sales in Spain and Germany and Claudie Pierlot opened a portal on Harrods’ web site.

Lalonde said the company plans to open 120 to 125 stores a year for the next two to three years, meaning the second half of 2016 would see a full schedule of openings. Projects include new boutiques in Florence, Macau, Toronto, Hong Kong, London and Paris, the latter a unit in the Carrousel du Louvre shopping complex. Italy and Switzerland are slated to add online sales. While the numbers in the Americas were more muted, Lalonde characterized the 9 percent gain as “good” given a weak environment. He noted the company focused on building like-for-like sales within its network of 127 stores.

Sandro men’s wear is also considered a growth lever for the group.