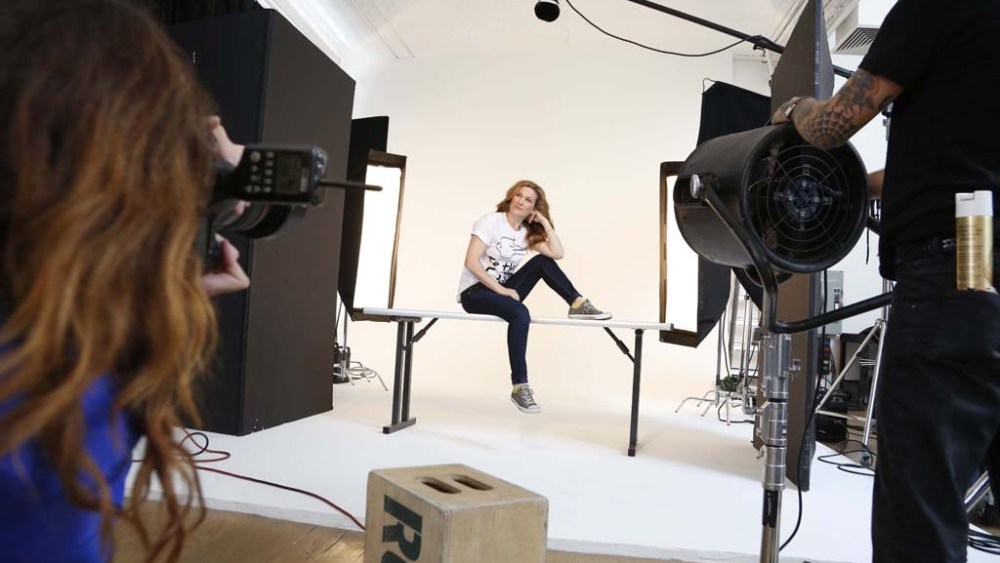 In what appears to be one of the more unlikely unions of two New York institutions, Saks Fifth Avenue has teamed with “Saturday Night Live” for this year’s Key to the Cure campaign. As the Entertainment Industry Foundation’s 2014 ambassadors for KTTC, past and present “SNL”ers Will Ferrell, Ana Gasteyer, Vanessa Bayer, Cecily Strong and Colin Jost were photographed wearing the Rag & Bone-designed T-shirt for KTTC.

The all-in attitude seems simpatico beyond the fact that the two operations are less than a block away from each other in Rockefeller Center — “SNL” is celebrating its 40th season and Saks is nearing its 90th anniversary. To build on the show’s milestone, seven New York-based labels have designed exclusive items inspired by various “SNL” characters that will be sold for a limited time in October. T by Alexander Wang “Mango” leather shorts, anyone? For Rag & Bone’s David Neville and Marcus Wainwright, that meant a pleated skirt, white shirt and waistcoat inspired by the school uniform worn by Molly Shannon’s Mary Katherine Gallagher character. The TV show’s Emmy-nominated costume designer Tom Broecker curated the selection. This fall, those two labels will share the stage, so to speak, in the Saks flagship’s limited-run “SNL” concept shop with one-offs from Diane von Furstenberg, Elizabeth & James, Suno, Alice + Olivia and Eugenia Kim. All of the proceeds from the $35 KTTC Rag & Bone T-shirt, which makes its debut Oct. 1, will benefit the EIF’s Women’s Cancer Research Fund. “SNL” creator and executive producer Lorne Michaels described the selection as “an incredible tribute to the show’s history.”

Over the years, the show has spoofed its share of designers, including Donatella Versace, John Galliano, and Mary-Kate and Ashley Olsen, among others. A fall 2011 skit with guest host Ben Stiller was set in what was supposed to be a Rag & Bone store.

Saks’ charity shopping weekend is set for Oct. 16 to 19 at all of the company’s full-price stores as well as its online one and Off 5th stores nationwide. Known for their sense of irreverence, Rag & Bone’s Neville and Wainwright will make a personal appearance at the Fifth Avenue flagship on Oct. 16. Their unisex design is a first for Saks’ KTTC initiative, as is spotlighting a handful of celebrities instead of one female A-lister, as was the setup in years past. Former ambassadors include Nicole Kidman, Gwyneth Paltrow and Charlize Theron.

During the charity shopping weekend, Saks will donate 100 percent of the limited-edition KTTC T-shirt sales and 2 percent of participating vendor sales to local women’s cancer organizations, and in New York, Beverly Hills, saks.com and off5th.com, up to a total of $500,000 to EIF Women’s Cancer Research Fund.

In the 15 years since the debut of its first annual charity shopping weekend, Saks has donated more than $35 million to cancer research. Reluctant to give any projections, Saks senior vice president of marketing and public relations Kathleen Ruiz would only say that 10,000-plus KTTC T-shirts have been produced — about 2,000 more than last year — and all are expected to be sold.

Like Bayer, who is a cancer survivor, this issue is one that Ruiz is all too familiar with and one she thinks requires a certain amount of distance. Asked if she was wary about using humor in a PSA that address what is such a serious matter to many, Ruiz said, “Laughter is the best medicine — and I’m a cancer survivor myself. When you go through something like that, you really don’t want to think about that. You want to go through what you have to do to get well, but you want to be able to be courageous and laugh. I think it’s terrific that they’re taking something serious and saying, ‘We believe there is a cure for this.’”

Neville said, “We wanted to support KTTC because cancer causes devastation and suffering to so many families.”

The final image used by Saks’ in-house creative time is a group shot, though each “SNL”er had to be photographed individually due to their conflicting schedules by the show’s staff photographer Mary Ellen Matthews. Aside from flying to Los Angeles to shoot Ferrell (who liked the shirt so much he asked to wear it home), the other locations were all in New York. On set last week at Root (Drive-In), Gasteyer and Matthews shared an easy rapport, with the comedian gum snapping her way through various poses. Logistics being what they are, Saks brass dealt with losing Maya Rudolph in the 11th hour as they would any other major photo shoot. For last year’s KTTC campaign, Penélope Cruz needed to be photographed in Spain due to her other commitments. And one year’s EIF ambassador, whom Ruiz declined to name, only had “two minutes” for the shoot.

But back to this year’s lineup — “Everybody wanted to sign on board. If we could have had more spaces, we probably could have gotten more people to be involved,” Ruiz said. “That, to me, says the world is interested in doing good things.”

And in all likelihood, the “SNL” fivesome — not to mention current stars and perhaps some of the show’s alum — will spread the word via social media to a degree unimaginable by one retailer. While Saks has not upped its media buy for the KTTC campaign, which will appear in September and October magazines, it is counting on all the interested parties to take its message viral.

The potential impact is vast considering that “SNL” and Saks have, respectively, 920,000 and 321,000 Twitter followers alone, and the seven brands tied to this year’s KTTC campaign have 1.6 million Twitter followers. (Von Furstenberg leads that brigade with 693,000, and Wang follows with 351,000.) Wang hinted at things to come by posting a T by Alexander Wang video featuring Chris Kattan’s Mango character earlier this month and taking the actor to the CFDA Awards.