"Regardless of gender, we shouldn’t be putting labels on colors," according to Pantone's Leatrice Eiseman. 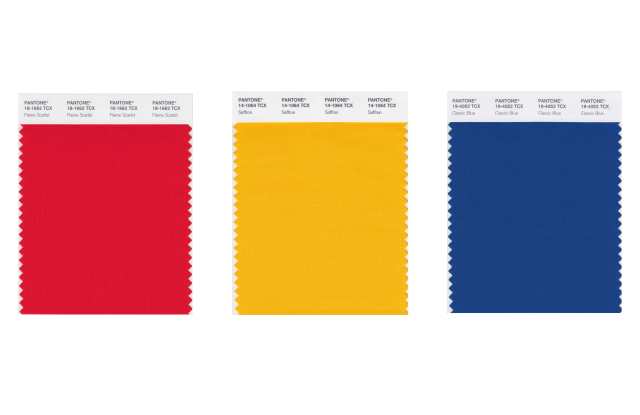 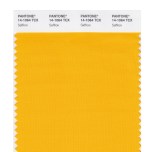 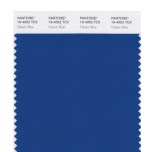 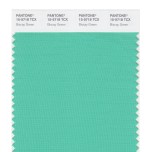 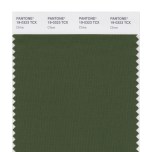 Just as fashion rules no longer apply, the same can be said for this spring’s use of color.

True to the spirit of the all-are-welcome fashion world, Pantone’s spring-summer 2019-20 has something for everyone. At the top of the list is the not-to-be-missed Flame Scarlet and the equally eye-opening Saffron. This season also has a healthy dose of tried-and-true blue, with three versions landing in the top 10 ranking.

While there is no denying that the 2020 presidential election will stir up plenty of red-state, blue-state debate, designers’ color choices are affected by more than politics, according to Pantone Color Institute’s executive director Leatrice Eiseman. “Fashion is often an indicator of what is happening in the world and around us. From a colorist standpoint and from a designer standpoint, the pervasiveness of blues are very calming blues and not over-the-top ones. It is more about let’s balance things out. We want to make a statement with the hot colors leading the pack. But at the same time, we understand we need those moments of calm to offset all the turmoil that is happening in the world around us.”

As equality, merging the pay gap, and treating women and men fairly are now expected, so too are genderless colors. “We are less apt today to talk about, ‘Oh, that’s a girly color, female color or male color.’ If a color speaks to you, you love it and it appeals to you — then go for it. Regardless of gender, we shouldn’t be putting labels on colors,” Eiseman said.

Multisensory factors are at play in the spring forecast. Consider number five: Chive; number seven: Orange Peel; number nine: Sunlight; number 11: Cinnamon Stick, and number 12: Grape Compote. Without question, the next generation of designers’ digital savviness will make their collections more multisensory, Eiseman said. “That is the future-of color – the synesthesia reaction. Some people call synesthesia a condition. I don’t. I think it’s an amazing thing to have. Some people see a color and imagine a sound that accompanies it, or they will hear a sound and a color will pop into their head. The same thing happens with other olfactory senses. We smell a certain scent and automatically think of a color.”

Flame Scarlet 18-1662: This confidence-building fiery red is more about determination than Republicanism. This “here-I-am, pay-attention-to-me” shade is more indicative of the women’s movement, Eiseman said. “Obviously, red always gives that voice to women.” During last month’s G7 in Biarritz, France, First Lady Melania Trump wore a Flame Scarlet-colored Alexander McQueen dress for the summit’s extended partners program. Earlier in the day her French counterpart Brigitte Macron sported a similar shade in a cut-out dress. And at the VMAs, Lizzo played up the “Siren” aspect of the color with a strapless Moschino dress imprinted with that message.

Saffron 14-1064: Yellow is always a spring color — the spring’s outlook has Saffron and Sunlight. But this very strong and determined shade adds a shot of brilliance to the palette from Eiseman’s point of view. “As a forecaster, one of the things I look at constantly is the food and beverage industry, because its direction has such a consumer interest level. Everybody wants to find out what tastes good, what’s the hot new thing, what do I need to try and experiment with? I have seen the rise of food as an influence steadily,” she said. “Saffron is evidence that we are really interested in learning more about flavors particularly when they are used in other countries. Saffron is not the only impactful color — chive green is another example.”

Classic Blue 19-4052: Following the one-two punch of a real wham of color, is this more dependable boundless blue. Reminiscent of the wide-open evening sky, Classic Blue hints at possibility and has a calming influence. And as the name suggests, this deep dark navy has a little more life and vitality. Meghan Markle is a believer, having worn Classic Blue dresses from Jason Wu and Roksanda Athena. Steadfast and dependable, this color is one that “a lot of people understand and get,” Eiseman said.

Biscay Green 15-5718: Cool, refreshing and transportive, this aqua shade is flattering to many skin tones and the name can conjure up travel plans. Madras lovers, Lilly Pulitzer shoppers and “The Preppy Handbook” readers adopted this color long ago. Eiseman said, “It’s one of those I-wanna-go-away, stop-the-world-I-want-to get off colors. When people see it in the marketplace, their hand reaches out for it. And it evokes vacation thoughts.”

Chive 19-0323: Move over kale, this restorative herb is winning over the style-minded in terms of favorite colors. Olivia Colman chose a chive-colored gown for her Oscar Night appearance, and the shade has been supported a few times by the ever appropriately dressed Kate Middleton. At this point, no one needs reminding that healthy greens are key to a healthy diet. Eiseman said, “That fact has opened people up to the concept of using the color green in other ways. If we are more familiar with a color through cooking, eating out or ordering food in, that has a huge impact on consumers’ awareness of a color and on their willingness to use it.”

Faded Denim 17-4021: Nineties-loving Millennials have helped to extinguish the dark denim trend and have replaced it with this more machine-washable baby blue. Proenza Schouler, Missoni and Alberta Ferretti embraced Faded Denim last year. Eiseman described this “super comfortable shade” as not “the stiff new pair of jeans that you just put on, but something that you have washed a few times or have the illusion that you have. Every color works with Faded Denim. We are adding excitement to this color by adding a punch of Saffron or Flame Scarlet.”

Orange Peel 16-1359: Is orange really the new black? This tart color has been hanging on as an influential shade more than ever before in the past 10 years, Eiseman said. Designers like 10 Crosby’s Derek Lam have added the hue to their spring collections. Even Cheetos staged its first ‘House of Flamin’ Haute’ fashion show Thursday. Celebs are on board with the color, too. Remember Kendall Jenner’s feathery custom Versace gown at the Met Gala? Carolina Herrera’s Wes Gordon and Sies Marjan were early adopters of Orange Peel on the runway. Eiseman said, “Orange was always a slow grower in fashion. It would be around for a few seasons and then disappear. Now season after season there is some tonality of orange. That is the ultimate in warmth.”

Mosaic Blue 18-4528: Issey Miyake and Elie Saab were among the designers who got an early start on this color trend with their spring 2019 collections. Art admirers recognize this teal-ish shade as one favored by Vincent Van Gogh. More complex than most blues, this is the kind of blue that one might find in a tapestry with historic significance, Eiseman said. “It is a graceful and more sophisticated blue with an air of mystique and depth of feeling.”

Sunlight 13-0822: Bring on the spring equinox and with it a warming presence. But this season’s softer version borders on pastel. Zendaya went with a Sunlight yellow checkered top with green shorts by Jacquemus at this year’s Teen Choice awards. And Sunlight was the color of choice last year for a “Tomb Raider” red carpet appearance by Alicia Vikander, who wore a floor-length, off-the-shoulder Louis Vuitton dress in the soft hue. Carolina Herrera’s Wes Gordon is also on board with the trend, considering “Superbloom” is his spring inspiration.

Coral Pink 14-1318: Priyanka Chopra, Kate Middleton and even Queen Elizabeth II have donned this warm and welcoming color. Aside from making wearers stand out in a crowd, Coral Pink has a history of its own, building off the popularity of Living Color. “Pantone specialists know that a Color of the Year generally has a holdover effect for the next year. People experiment with the color. They buy it, they like it — they don’t want to give it away. They’re going to combine it in a new way,” Eiseman said. “Coral Pink is a softer spring version of Living Coral. This really pretty, flattering color will continue to have an impact for spring next year.”

Cinnamon Stick 18-1345: Earthy and warm, Cinnamon Stick is sweet yet spicy. In a scene from the film about Judy Garland titled “Judy,” Renee Zellweger wears a pleated dress in this color. Hints of Cinnamon Stick could be seen in the leopard-printed Diane von Furstenberg gown that model Adwoa Aboah wore to the Met gala, as well as the Zac Posen-designed one that Jourdan Dunn donned at the same event.

Grape Compote 18-3513: Remember Spike Lee’s purple suit on Oscar night? Beyond being a “good food color,” Grape Compote is a very mellow shade that is not a strong purple. Once designers and shoppers experiment with it, they may ask, “‘Why haven’t I used this before?’ This is a great neutral, when you don’t want to wear gray or beige. It gives us the ability to be more spontaneous and creative,” Eiseman said.

Lark 16-1324: Karl Lagerfeld’s final show for Fendi in February was awash with this khaki color. And Gap’s 50th anniversary year may very well lead to more shoppers sporting the pants by the same name. Proenza Schouler’s Jack McCollough and Lazaro Hernandez infused Lark into their resort 2020 collection. Understated and interchangeable, this shade is trans-seasonal. Eiseman said, “In the last several seasons, we have seen a decided movement to these warm neutrals. Women in particular are seeking that kind of warmth. They want to wrap themselves in things that are going to make them feel a little more secure, a little less cold and foreboding.”

Navy Blazer 19-3923: This dramatic deep blue has a certain self-assuredness. Just look at how Valentino’s Pierpaolo Piccioli and Schiaparelli’s Daniel Roseberry wove it into their respective couture collections. Blazers, however, as worn on this summer’s MTV VMAs red carpet by Taylor Swift and Maddie Ziegler, have been received with mixed reviews.

Brilliant White 11-4001: This foolproof basic can also be a palette cleanser for spring after overindulging on Orange Peel, Biscay Green or any of the other bolder options. Actress Rooney Mara opted for a structured white Givenchy gown on the red carpet at the Venice Film Festival. For more casual folks, this crisp, modern choice can leave the wearer feeling very clean and pristine, according to Eiseman. “Of course, over time, wearing white every day would get a little boring and would not be terribly practical.” Brilliant White is for when you need that “day of no color, just purity and cleanliness,” she said.

Ash 16-3802: Ash could pass for “a midtown gray” from Eiseman’s perspective. Gray has been a favorite with scores of designers like Thom Browne for a few years running. Aside from the dependability factor, this staple also plays well with sensational brights like Saffron, Scarlet Flame, Orange Peel and Sunlight. Eiseman said, “We want to have basics. We have to stay with colors that are a little real and manage the pocketbook. But at the same time, we’re obeying less of a rule book approach to fashion, and mixing it up with color. That is wonderful. That is what gets the creative juices going.”