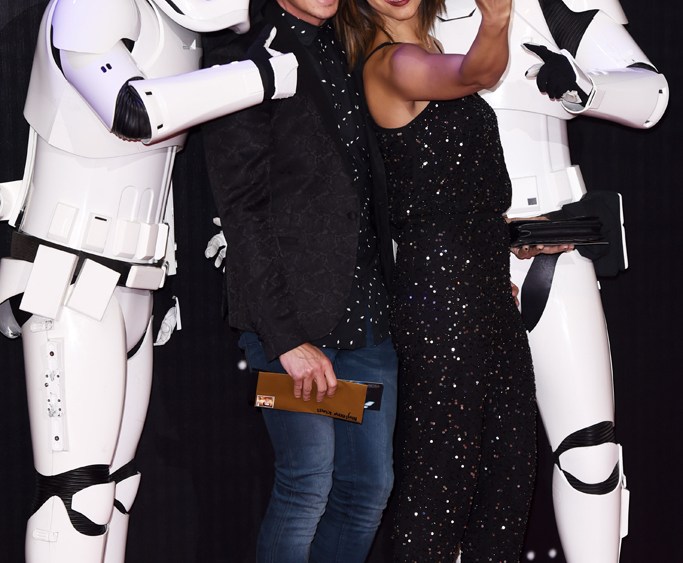 G-FORCE: Fresh from her win at the British Fashion Awards — and from the L.A. premiere of “Star Wars: Episode VII The Force Awakens” — actress Gwendoline Christie landed on yet another red carpet, this time in Leicester Square.

Christie, who also stars on “Game of Thrones,” said she’s been a fan of “Star Wars” since she was six years old. “It’s so overwhelming. How could anyone ever, ever believe this sort of thing would happen?”

The actress, who plays Captain Phasma in the latest “Star Wars” film, walked off with the British Style, Red Carpet Ambassador award last month at the BFAs, and certainly proved deserving of the accolade Wednesday night at the premiere that took place across three cinemas in the square.

She donned a black Giles dress with a duchess satin bodice, embroidered all over with Swarovski crystals, and with stripped ostrich feathers at the front. The skirt was made from silk chiffon and had a train. Although the dress was a new design, it was inspired by the Giles fall 2011 black-and-white collection of strict, elegant silhouettes that had a whiff of Victoriana and featured rich fabrics and brocades.

“The audience last night was fantastic — and the cast got a real buzz from it all,” Deacon told WWD. The cast and other guests later attended a party at Tate Britain that featured — appropriately — laser light displays.

Earlier this week at the L.A. premiere, Christie wore an Oscar de la Renta dress by Peter Copping, a fellow Brit and longtime friend of Deacon’s.