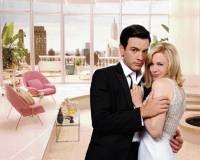 LOS ANGELES — Long before red carpet-watching became a national pastime, fashion fans were inspired by big-screen style. And now, thankfully, the full-blown fashion film has made a comeback.

The tail end of 2002 brought some of the best-costumed movies Hollywood has seen in years, including “The Hours,” “Chicago,” “Far From Heaven” and “Gangs of New York,” and the outlook for 2003 is just as promising. A miniskirted Reese Witherspoon will lend political activism a shot of chic in “Legally Blonde 2: Red, White and Blonde.” Gwyneth Paltrow plays a stylish stewardess in “View From the Top.” That fabulous — and ferocious — fashion threesome will return to the screen with “Charlie’s Angels: Full Throttle.” And Renée Zellweger and Ewan McGregor go over-the-top in April’s high-camp, high-fashion “Down With Love” as a Sixties- style Doris Day-Rock Hudson duo.

While most costume designers claim their job is to serve the film, not to make clothes that people notice, Daniel Orlandi’s costumes for “Down With Love” break the rule. The film celebrates Day-Hudson films like “Pillow Talk” with innuendo-filled banter, outrageous sets and Orlandi’s splashy retro fare.

“What more could you ask for?” says Orlandi, who’s been a fan of the genre since he was six years old. “We got to make all the clothes, hats and bags — about 100 costumes, total.” The film is full of grand entrances and exits, with actresses turning to reveal a bare back or dropping a coat to uncover a contrasting dress, most made from vintage fabrics. There are even mini fashion shows of sorts, when the music stops and the actresses strut around to show off their clothes. For her part, Zellweger, had 39 costume changes, each with its own hat, shoes and bag.

“The actors were really tickled to get into their clothes every day,” Orlandi says. “They’d see each other for the first time and just go crazy.”

Julianne Moore, who won critical praise for her turn as a Fifties-era housewife in “Far From Heaven,” is one actress who is glad for a return to fashionable films. “People in fashion go to movies to get inspired and people in movies look to fashion to know how to dress,” she says. “It’s a very symbiotic relationship. Sandy Powell [“Far From Heaven,” “Gangs of New York”] and Ann Roth, in particular, have extraordinary taste.”

Roth, who is just finishing costuming “Angels in America” and recently completed “Cold Mountain,” will receive this year’s Oscar for lifetime achievement in costume design. While dressing the cast of “The Hours,” she linked the characters to their pasts by the color scheme, via the artwork of Vanessa Bell, Virginia Woolf’s sister.

“I used all the colors of Vanessa Bell’s paintings for every single costume,” says Roth. “The blue of Ed Harris’ robe was the same blue in his childhood curtains and Julianne’s bedspread. The roses on Julianne’s cake were taken from the bouquet that Meryl Streep carried.”

Roth’s perfectionism didn’t go unnoticed by “Hours” star Meryl Streep. “I’m a real pain in the ass for any costume designer,” says Streep, “but clothes are so eloquent to me. My ‘Hours’ costume defines a specific kind of bohemian West Village sensibility through gestures, jewelry and dishabille.”

Working a more modern boho look, Selma Blair dons Marc Jacobs in “A Guy Thing,” to be released this month, while Kate Hudson gets accessorized in Tod’s for “How to Lose a Guy in 10 Days.” But then Hudson isn’t the only one. The film will be marketed to Hollywood’s press with a series of girly screenings accompanied by spa treatments, where journalists will be invited to try on accessories used in the film. The “Down With Love” press kit included about 50 sketches of Orlandi’s costumes packed in a nifty retro bag.

While studio marketing teams have realized fashion and film make for a potent combination, Roth, the grand dame of costume design, plays down the renewed connection.

“Fashion is not anything I know a lot about,” she insists. “I love looking at the superb Chanel and Vionnet, but really, fashion doesn’t interest me.”

At the moment, she seems to be the only one in Hollywood who feels that way.