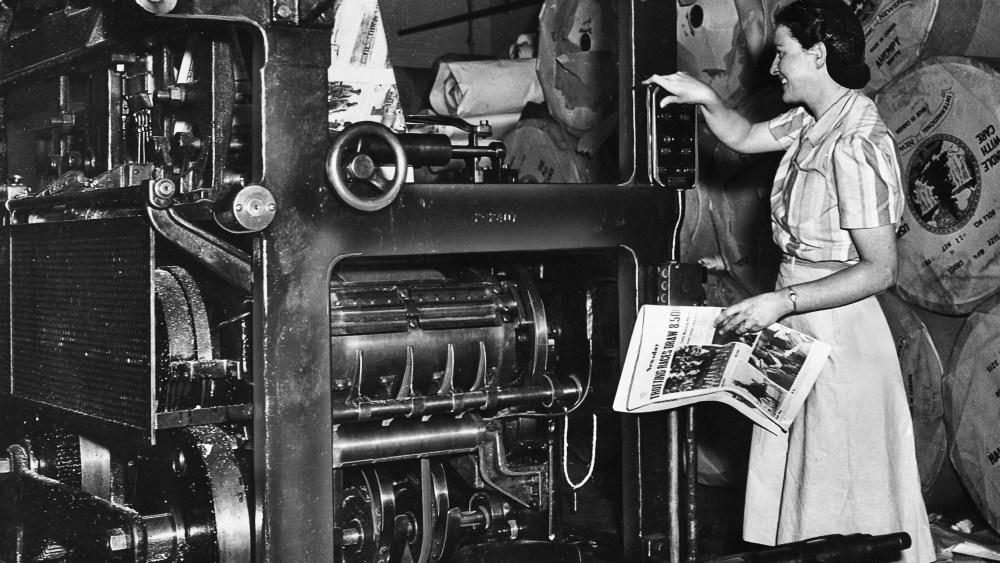 Alicia Patterson was a pioneer in many respects. She was one of the first women pilots, and, as such, set several land and speed records. She was an excellent rider and a big-game hunter. And she founded and ran Newsday. Now Alice Arlen and Michael J. Arlen have written a biography of her, “The Huntress: The Adventures, Escapades and Triumphs of Alicia Patterson: Aviatrix, Sportswoman, Journalist, Publisher” (Pantheon Books, New York).

“She was the middle child of her family, she started out kind of the ugly duckling, bouncing around here and there, in and out of school, and finding a sort of purpose in being kind of a tomboy, friend, pal to her father,” says Michael J. Arlen of his subject, whose father, Joe Patterson, founded The Daily News. “That’s how she started adventuring, hunting big game and flying. Extremely active, very audacious. At a certain point, things started coming together for her, and she followed the family path into newspapering, but did it very much her own way.

“I think what we were trying to show in the book is how dynamic the kind of lives were that used to be much more common to men,” Arlen adds. “Here’s a woman who started out with a certain amount of privilege, and privilege is often as much trouble as it is an advantage. She kind of kept falling over herself, kept going in the wrong direction — just the sort of thing that men had so often done — found herself where she could change her life, and did so.”

Alice Arlen, Michael J. Arlen’s wife, was the niece of Alicia Patterson and the grand-niece of Cissy Patterson, also a newspaper publisher, about whom she wrote a 1966 biography of that name. It was her idea to write Alicia Patterson’s biography. Unfortunately, Alice Arlen died in February after a long illness.

“Alice was really a remarkable woman,” recalls her widower. “And calling her affectionate doesn’t really say it. She had this extraordinary gift for specific connections.”

To write her first screenplay, she teamed with Nora Ephron. “Nora was working for magazines and trying to get her own screenwriting career off the ground, and her agent funneled towards her a television play that hadn’t gotten out about Karen Silkwood. Meryl Streep had optioned it, and anyway Nora thought that she needed somebody to help write it with her. Alice had reinvented herself by going off to Columbia Film School, so Alice and Nora got together and Mike Nichols came aboard, too. So they would go down for the better part of a year every morning to his office at the Carlyle Hotel.

“They were sort of having trouble in their Carlyle Hotel period, and Alice found out that some of the original characters in the Silkwood story were still very much around in Oklahoma and Texas, so she told Mike and Nora that they should go down there and they were extremely resistant. But Alice finally persuaded Nora to go down with her, and out of that came the screenplay.” It became the Oscar-nominated 1983 film “Silkwood.”)

Alicia Patterson’s third husband, Harry Guggenheim, put up the money to launch Newsday, and he insisted that he retain 52 percent of the shares in the venture to her 48. But he had his own job — running the vast Guggenheim mining interests — and it was Patterson who actually created and ran the paper. “She was very prescient to guess that this little sleepy part of Long Island would grow so much,” says Arlen.

One of the revelations in the book is that Patterson and Illinois Gov. Adlai Stevenson had a romance as well as a longtime friendship. “He was often kind of crippled by indecision,” says Arlen. “She was influential in getting him into politics. She was the stable one, the successful one. It was always her temperament to say, ‘Do it! Get going!’”

Both Alicia and her aunt, he notes, came from “families out of the American heartland that had arrived on a boat a long time ago. These were families that made the center of America. They were full of purpose and Presbyterianism. The great figure of the family, Joe Medill, [an owner of the Chicago Tribune and mayor of Chicago after the Great Fire of 1871] was one of the first Lincoln men, a founder of the Republican Party and an early antislavery figure. These were strong men, often attached to extremely frivolous women. Some members of these families were great, and others ended up in a ditch.

“Alicia adored her own father, Joe Patterson,” Arlen continues. “He was a very interesting man, with much of the drive as well as the unreliability of his ancestors. He made innovations in newspapers by starting crime reporting and sports coverage; adding comics, and expanding the whole visual element. He was an early backer of Roosevelt, but then he got himself on the wrong side of history and ended badly [when he later] made a stand against him.”

Shortly after they married, in the summer of 1939, Guggenheim suggested that Alicia Patterson should run her own small newspaper. He bought the presses of a very short-lived newspaper Sam Newhouse (founder of Advance Publications, who would later buy Condé Nast) had run out of a former car dealership in Hempstead, N.Y. He paid $50,000. On Sept. 3, 1940, Patterson launched the first issue of Newsday, which consisted of 30 pages, many of them badly smudged. She admitted, “I’m afraid it looks like hell.”

This, however, soon changed. At first, it ran in the red, but the paper became profitable within a few years, its circulation rising precipitously. In spring 1949, Time magazine ran a full-page story on Patterson titled “Another Patterson,” which noted that Newsday’s circulation was above 100,000, and called the paper “a journalistic jackpot.”

In 1950 and in 1953, Newsday ran two series of exposés about a union boss named William DeKoning, who had a reputation for violence and graft. In May 1953, Newsday won a Pulitzer Prize for its coverage. Patterson was the subject of a Time cover story on Sept. 13, 1954.

Patterson died unexpectedly of what her doctor called “uncontrollable bleeding” after an operation in July 1963. She was 56.

Arlen’s family had some interesting members of its own. Perhaps the most intriguing was his father, writer Michael Arlen, who was born Dikran Kouyoumdjian to an Armenian family living in Bulgaria. In 1901, his family moved to Southport, in Lancashire, England, and in 1913, he moved to London. There he became a writer and took the pen name Michael Arlen. His third book, “The Green Hat,” published in 1924 — with its dramatic heroine, Iris Storm, who drove a yellow Hispano-Suiza — was a bestseller and brought him great fame. He became a celebrated figure of the Twenties and a dandy.

The younger Arlen has published eight other books, among them the critically lauded “Exiles” in 1970 and the 1975 “Passage to Ararat,” which won the National Book Award. He also worked for Life magazine and was the television critic for The New Yorker.

What did he learn from the senior Arlen? “I think I learned to find my own way,” he says. “I think probably those things that you’re very reluctant to learn when you’re young, which is the sheer hard work of it, and the fact that, if it seems easy, it probably isn’t right.

“I also think he was an original. He was the youngest son of a very solid, mercantile Armenian family. He himself was very playful, ambitious, and he invented a public persona. But he was quite different from it; he was very warmhearted.

“My father was really a very good guy, very hard-working. He wrote ‘The Green Hat’ in about three months and he knew it was going to be a big deal, and it was. But he wrote at least a dozen books, and some of the others did pretty well. But people were always saying, ‘When are you going to write another ‘Green Hat’?’ you know.”