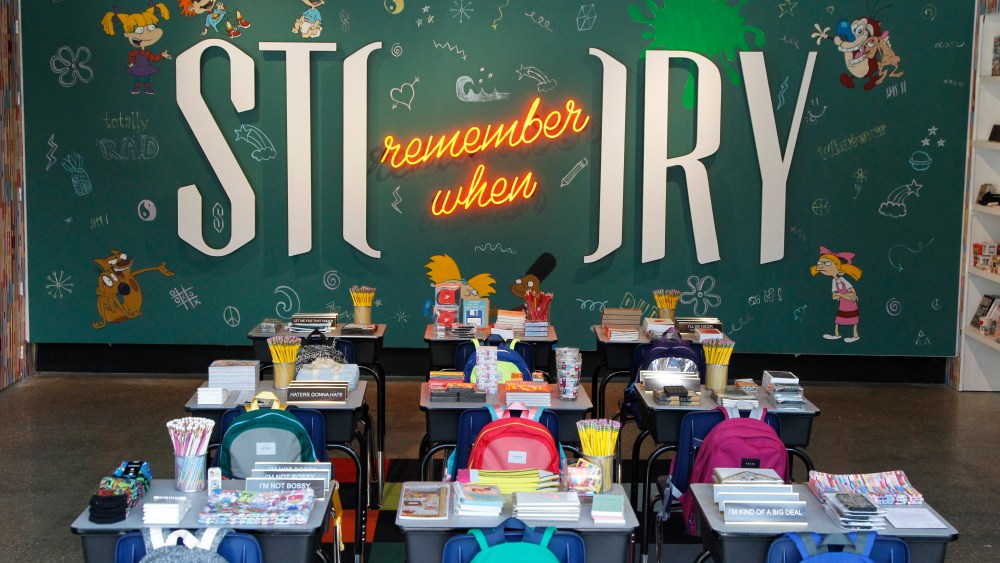 NEW YORK — With its new Nickelodeon-themed concept, the West Chelsea boutique Story is taking its schtick on the road through tie-ins with Neiman Marcus’ web site and California retailer Ron Robinson.

The independent downtown store, which reinvents itself every few months, is now presenting a Nineties-inspired “Remember When” experience that highlights Nickelodeon shows such as “Rugrats,” “SpongeBob SquarePants” and “Ren and Stimpy.” Running through Sept. 18, the set-up in the New York store features more than 25 brands, including Story’s own private label. More unexpected finds are a stonewashed Gap denim jacket and SpongeBob Rolex watch customized by Bamford Watch Department.

In New York, “Remember When” shoppers will find such kitschy experiences as a Foxtales-designed selfie station that visitors can use to get digitally slimed and a “Double Dare” hamster wheel to test their speed. Fans of the network can also check out interviews with show creators and characters through a Perch-enabled display. Story’s retro concept is meant to celebrate the 25th anniversary of Nickelodeon animation. Pam Kaufman, chief marketing officer and president of consumer products at Nickelodeon, said Millennials, the generation that grew up watching the channel, have made it known via Facebook, Instagram, Pinterest and other social media that they miss the Nineties.

Story founder Rachel Shechtman dreamed up a 1991 flashback feeling by setting up a homeroom complete with desks and a podium and dividing the store into class clubs. Homeroom features a mash-up of Nineties characters — Besties consists of Nickelodeon’s better-known tag teams; Double Dare was inspired by the Nineties game show of the same name; City Kids is made up of “Hey Arnold!”-inspired items, and Yearbookers is comprised of nostalgic selections such as Sugarfina Slime green apple candy. The letter from the editor, which frequent shoppers at Story have grown to look for, is written like a valedictorian speech. Illustrator Charlotte Fassler flew in from her home in Marfa, Tex., to draw portraits of some favorite characters on the Story wall. Shechtman estimated that 20 to 30 percent of the offerings are apparel.

To help further the event’s reach, Ron Robinson will launch a limited run of “Remember When” merchandise from 18 brands in a concept shop in its Santa Monica, Calif., store starting on Aug. 18. The Neiman Marcus web site will feature dozens of styles from 14 brands featured in the “Remember When” selection starting on Aug. 23. This will be the first time Story has branched out from its own location at 144 10th Avenue.

Neiman Marcus president and chief merchandising officer Jim Gold said, “We thought it would be really fun to show our clients things that they probably hadn’t seen before — unless you have the opportunity to get to Chelsea to one little store that’s doing really fun, creative, interesting things. We thought it would be novel to bring that to the Neiman Marcus client. At the same time, there are things Neiman Marcus can do that can help Rachel [Shechtman] get exposure to for her company.”

Distributed in 175 countries, Nickelodeon has a built-in base of fans, from which all of the “Remember When” parties stand to benefit. Kaufman’s favorites include the Jeremy Scott selection (which includes a leather jacket and boots). “He’s the ultimate Nick kid. He grew up on Nickelodeon and has probably done one of the best jobs of reinterpreting Nickelodeon characters. I love his ‘Ren and Stimpy’ collection,” Kaufman said, adding that the company hopes to work with him again.

She declined to reveal annual sales are for the consumer products division that she oversees. In terms of myriad products that it has licensed, she recalled how in years past, Nickelodeon licensed a “SpongeBob SquarePants” thong and “Teenage Mutant Ninja Turtles” mud flaps for trucks. With select freestanding Nickelodeon stores in locales such as London’s Leicester Square and Panama, the company plans to open another in Dubai. “There isn’t a set number of Nickelodeon stores that will open….It’s not a huge business goal. It’s more of a brand statement,” she said.

Through a deal with Triple Five, Nickelodeon has a theme park in the Mall of America, which is one of the world’s largest indoor theme parks. Other worldwide locations are in the works with a variety of other partners, Kaufman said. And a Nickelodeon luxury hotel recently opened in the Dominican Republic. “It’s really about Nickelodeon’s footprint going where the consumer is.”