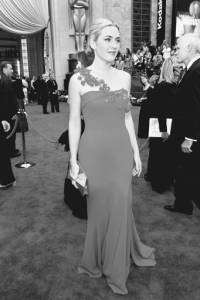 Kate Winslet and director Sam Mendes have their hearts set on a summer wedding. The two have been in love since her divorce last year from Jim Threapleton — and with that name, well. Sam is devoted to Kate’s daughter, Mia, and Kate is eager to make them one big happy family. Plan on seeing the happy couple in New York on a regular basis, while Sam rehearses Antonio Banderas for his upcoming Broadway revival of the musical “Nine” based on Fellini’s film, “8 1/2,” which starred Marcello Mastroianni and Claudia Cardinale.

Gwyneth Paltrow is among the actresses poring over those secret files that Scotland Yard just released in London semi-baring on Wallis Warfield Simpson and King Edward VII, who, as the world knows, became the Duke and Duchess of Windsor. The papers, locked away for 70 years, had several revelations, including details on the affair the svelte Duchess had with a certain Guy Marcus Trundle, a handsome car salesman who danced like Fred Astaire. According to the files, the Duchess was seeing him at the same time she was seeing Edward (whom she called David) and still married to Ernest Simpson.

Gwyneth is keen on starring in the new BBC movie about the Duchess’ life, to be titled simply “The American Woman.” Screenwriter Heidi Wallis had been waiting to read the confidential papers so that she could put the finishing touches on the script, which she promises will be a whole new look at the most intriguing love story of the entire last century.

Currently, there is a casting search going on for who will play Edward. Front-runners include “Band of Brothers” star Damian Lewis and Tom Hollander of “Gosford Park.” Gentlemen, call in your tailors. If Gwynnie gets the part, she will have to dye her hair black and get skinny, but if Nicole can hang that nose on herself, for La Paltrow, it should be a snap.

Lady Helen Taylor, the Duke and Duchess of Kent’s pretty blond daughter, doesn’t care who knows that the baby she and her husband, Tim Taylor, the London art dealer, are expecting in April will be a girl. You can hardly blame her because she already has two simply adorable boys with the equally adorable given names, Columbus, age 8, and Cassius, age 5. Lady Helen allows that those pregnancies were much easier than the one she’s undergoing now. “One can only hope that because it’s not so easy this time, it’s going to be a girl.” What?

The magnificent Morgan Library’s gala benefit — with a “We’ve Got Plans” theme of the evening — celebrated the Morgan’s major building and expansion project designed by Renzo Piano. It was the last gala in the library’s old place as the plans are now to close in early May when construction begins. To create excitement about the new expansion, the current Exhibition Room and Reading Room were turned into veritable “construction sites” dressed up for the night with elements related to building trades, architecture and design. What an absolutely withered concept!

At least 300 lovely people filled the rooms for the elegant dinner and disco in the garden court for the Young Associates (and brave older folks), including members of New York’s business and social elite — exactly what one would expect on an illustrious Morgan guest list — all eager to support this remarkable museum and research center. The library’s trustees include such worthies as S. Parker Gilbert, president; James R. Houghton, vice president; Robert M. Pennoyer, secretary; George L. K. Frelinghuysen, secretary, and trustee ex-officio Charles E. Pierce, the Morgan’s director, who along with Mrs. Pierce hosted the celebration. All wheat, no chaff. All sheep, no goats.

On Feb. 12, the most exotic and exceptional of flowers, orchids, will bloom and be for sale at the New York Botanical Garden’s Orchid Dinner at the University Club. Dominique Browning of House and Garden, and Ann and Philip Miller are the chairs of the evening, and Carolina Herrera is the honorary chairwoman. Please wear your best cocktail dress. After le dîner, on dansera.

Speaking of dîner and dansera, it’s being called “an evening of nouveau glamour” when the Young Fellows of the Frick Collection do their celebrating on Feb. 6 at the glorious museum on Fifth Avenue. Marina Rust Connor, Nathalie Gerschel Kaplan, Lauren du Pont and Aerin Lauder Zinterhofer are the chairs, and Sidney Toledano, the president and chief executive officer of Christian Dior couture, is the honorary chairman. The Frick is working with Dior and the “tone” of the party will be Thirties Deco. The glamour is supposed to last until midnight. It helps if you’re young.

Speaking of glamour, one of the most brilliant parties of the spring season — the American Academy of Rome’s big dinner — is set for April 7 at Cipriani 42nd Street. Three great American composers along with their music and correspondence from the Academy will be honored. Find out who, later. No dancing whatsoever, but everyone is expected to mangiare. Mercedes (Mrs. Sid) Bass, wife of the Fort Worth billionaire and the American Academy’s great benefactor, is the chairwoman of the evening.

Ralph Lauren will draw inspiration from the Orient to create one of the one-of-a-kind tables for the Design Industries Foundation Fighting AIDS Gala at the Hammerstein Ballroom on Feb. 10. Ralph’s romantic offering will feature a pagoda, vintage collectibles and classic prints (from his home collection). The dinner-dance will feature 50 tables by 50 designers, including Giorgio Armani, Reed Krakoff of Coach, Cynthia Rowley, Nautica, Vicente Wolf, Target and Matthew David, whose table will be enclosed in a towering pavilion of twisted grapevines with a 15-foot waterfall of fresh scarlet roses. A selection of the tables will travel to eight other cities from Miami to San Francisco. This year’s chairman, David Rockwell, hopes to top the $1 million the exhibition raised last year. The committee includes such fashionable figures as Todd Oldham, Maggie Rizer, Ruben and Isabel Toledo and lots of others just like them.