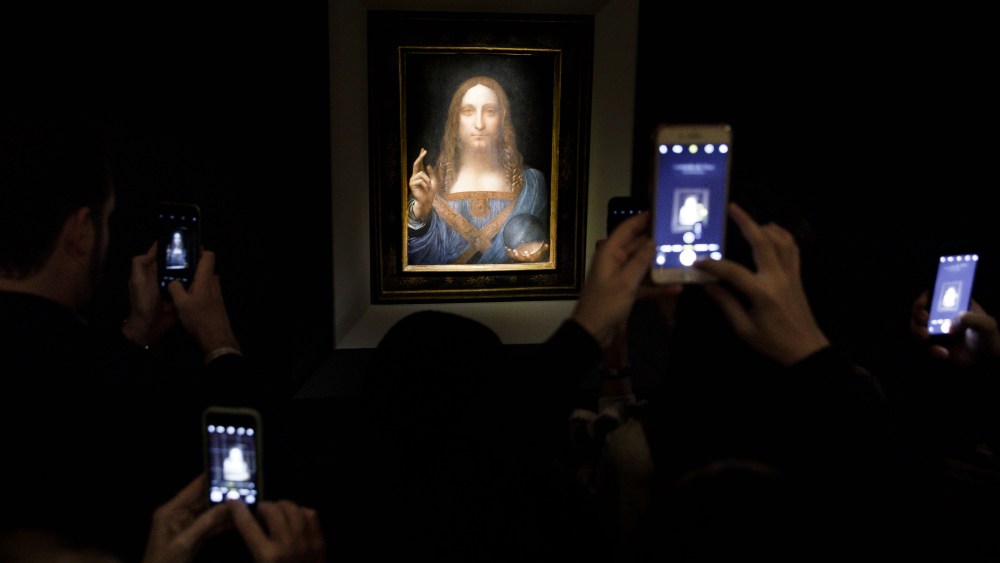 A record-shattering auction, with its pulse-racing drama akin to suspenseful theater, garners worldwide attention far beyond that of the high-net-worth bidders. In 2017, the superstar of the market was without question Christie’s sale of Leonardo da Vinci’s “Salvator Mundi.” Dubbed the last known painting by the Italian master in private hands despite some questions over its authenticity, the roughly 500-year-old work sold for an unprecedented $450.3 million in October to an absent bidder, reportedly Saudi Arabia’s Crown Prince Mohammed bin Salman.

Because of its rarity, a work like “the last da Vinci,” while thrilling, cannot be an accurate bellwether for overall market behavior. But this one-of-a-kind offering was simply a massive exclamation point at the end of a banner year for auction sales across a range of price points and categories, helped largely by increased worldwide accessibility and the ease of online bidding.

“Buyers at the highest level are always going to be there,” notes Lydia Fenet, a senior vice president at Christie’s New York. “The market is so global now. You look at the phone banks and there are people speaking every single language during a sale because there are people bidding from every country in the world.”

Fenet observes how the Chinese market is the driving force in sales along with the Middle East and Russia, all enhanced by live-streaming of each auction and one-click online bidding that didn’t exist earlier this decade.

The Internet has also allowed for a more educated client, according to Fenet, who has spent her 18-year career at the British auction house. “As millionaires and billionaires are being created overnight either in the tech world or with China creating new financial models, all of these things are adding to the potential for [new] clients. For us, it’s educating people outside the [traditional buying] hubs and allowing everyone in the world to access art,” she says.

The Louisiana-born brunette, who is a regular presence as benefit auctioneer for many of New York’s leading charity galas, equates the shift in her industry to that of many others. “The auction world is trying to adapt in the same way that many other communities are — like the fashion community with the ‘see-now-buy-now model,’” continues Fenet. “It used to be a lot more about the community of being here [for a sale] and now it’s more about who’s buying the art.”

Lisa Dennison, chairman of Sotheby’s North and South America, saw a 30 percent increase in the firm’s online bidding from 2016 to 2017, a buying option she describes as a “very good vehicle for attracting new clients.” In past years, online sales primarily ran at different sale cycles than their traditional counterparts, often with lower price points. But recent years have seen all auctions at Sotheby’s open to online bidding, meaning there is no cap to how much a cyberspace bidder can spend. At the Sotheby’s contemporary day auction in November, a 2011 abstract drawing by George Condo titled “Compression IV” sold for just over $4 million to an online bidder, far surpassing its $1.2 million estimate and beating out other bidders who were physically present.

“A lot of people can’t attend live auctions or don’t want to speak to a live person on the phone,” adds Dennison of a growing trend that some argue threatens the spirited theatrical component to a live auction.

“That heated paddle raise has been gone for a while,” reveals Dennison, who is the former director of New York’s Guggenheim Museum. “Even if [clients] are in the room, they’re [typically] talking to someone on the phone. I’m sure we’ll see an evolution of this as the world continues to be more reliant on digital technology. When we look at the year, [more than half] of all online bidders were new [clients] to Sotheby’s and came from all corners of the globe.”

Technological advancements notwithstanding, Fenet notes the most popular sales perennially hinge upon “provenance, rarity and timing.” An 1889 landscape titled “Laboruer dans un champ” by Vincent van Gogh greatly exceeded expectations at Christie’s evening sale of Impressionist and Modern art with a final price of $81.3 million, the second-highest auction price on record for the Dutch painter.

And while the da Vinci sale saw an uptick of market interest in Old Masters, Fenet sees “less impulse” among buyers of all categories, who now more often use Internet research to educate themselves about particular pieces “instead of just buying whatever they see in front of them at that time.”

According to Dennison, the jewelry market was red hot in 2017, particularly with colored stones. “Diamonds, sapphires and emeralds are what people love today,” she says, noting Sotheby’s Hong Kong sale of an internally flawless, 59.60-carat pink diamond for $71.2 million, the highest price paid for a jewel to date.

Another momentous sale in the past year was of a painting, “Untitled 1982,” a skull by Jean-Michel Basquiat, which sold at Sotheby’s New York in the spring for $110.5 million, setting the auction record for a contemporary American artist and introducing a flood of Basquiat’s work to market with mixed results, proving the auction market is never surefire.

A 1982 Basquiat titled “Il Duce” directly followed the da Vinci “Salvator Mundi” lot at Christie’s in November with an estimate of $25 million to $35 million. But it failed to meet its reserve and did not sell in spite of having never before appeared at auction. “You have to get the pricing right, but there was nothing that shot up at multiples of its estimate after the May record,” says Dennison.

Contemporary female artists also saw a strong performance in the past year, which included a work by Los Angeles-based painter Laura Owens that exceeded its high estimate of $300,000 with a winning bid of $1.8 million at Sotheby’s November evening sale. “I predict we’ll see a continuing trend in either these undervalued or newer women artists,” adds Dennison. “It’s very much their time.”

But just as real estate depends on location, the success of an auction piece has everything to do with provenance. In October, a Rolex Daytona stainless-steel chronograph watch sold for $17.75 million at Phillips in New York, the highest amount ever paid for a wristwatch. The timepiece was purchased for Paul Newman by his wife Joanne Woodward in 1968 from Tiffany & Co. and included an inscription to the actor and former race-car driver that read: “Drive carefully [—] Me.”

“If you have noted authorship of the maker, beautiful design and some level of great provenance, then you really have a kind of trifecta and jewelry in particular can reach extraordinary heights,” adds Dennison.

In November, the estate of celebrated French interior designer Jacques Grange, which included many important modern and contemporary works, achieved $33.3 million, making it the highest-ever single-owner sale in Paris to date. “Whenever you can find a personality, a legend, someone whose collection comes to market — that is magical,” explains Dennison.

For 2018, this type of “once-in-a-lifetime” highlight will undoubtedly be the cross-category Christie’s offering of Peggy and David Rockefeller’s estate in May. The sale will include a broad example of Impressionist and modern art from postwar to contemporary, with all proceeds benefiting 12 charities designated by the famously philanthropic family. “It goes to what we’re talking about in terms of the provenance and rarity,” observes Fenet, who notes the “entire Christie’s team globally is activated and working on that [sale].”

With growing anticipation of the Rockefeller and other single-owner sales over the next few months, client interest in such world-class auctions remains strong. But following a period of rapid technological advancement, the multibillion-dollar question for the industry’s top players is: What changes will 2018 bring?

“The auction business is over 250 years old, so changes have [typically] come slowly,” observes Dennison. “But now, all of a sudden, we see a much more global group of collectors and online [bidders]. Where are we going? How much more will traditional categorization be challenged and how much more will the borders break down?”