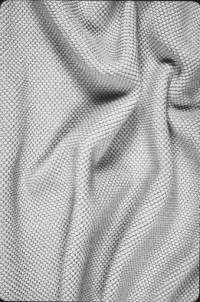 “Reality is the key,” he said. “Although, I do feel there’s a place for mixing things that are ordinary and special. Now is the time to be original.”

The three color groups for the season — Unassuming, Connecting and Dramatic — were concise in their focus. Unassuming featured soft and whitened neutral tints, slightly matte and warm. Connecting, a collection of winter darks, suggested movement and had a mysterious feel. Dramatic included brights inspired by nature, which could encourage an eclectic feel.

Each grouping also addressed texture. For Unassuming, brushing or corduroy ribs offered surface interest, which could be tweaked to include crushed and punctured motifs, as well as decorative styles with baroque and home furnishing-inspired jacquards that could be coated or washed to give them a worn-in appeal.

Connecting’s fabrics were more refined. It coupled stretch wovens with sensual jerseys that had frilling or ruffling on the edges. Knitwear in the group was tactile, and tweeds could be either large or small. Decoration in the group was more subtle and included pinstripes and checks with embroidery or graphic patterns.

Fabrics for Dramatic were layered and mixed together. “I call them happy accidents,” said MacLennan. Patterns that included checks, stripes and prints were thrown together in the group as were decorative and functional looks. “These pieces are very personal,” added MacLennan. “Jacquards give a highly decorative look, while tapestries and embroideries have a home-furnishing feel. It’s also important to embrace the natural imperfections in fabrics.”

All these groups, he continued, create an equilibrium of looks for consumers.

“It’s time to reclaim design, to be original,” said MacLennan. “We should expect more because the consumer certainly does.”