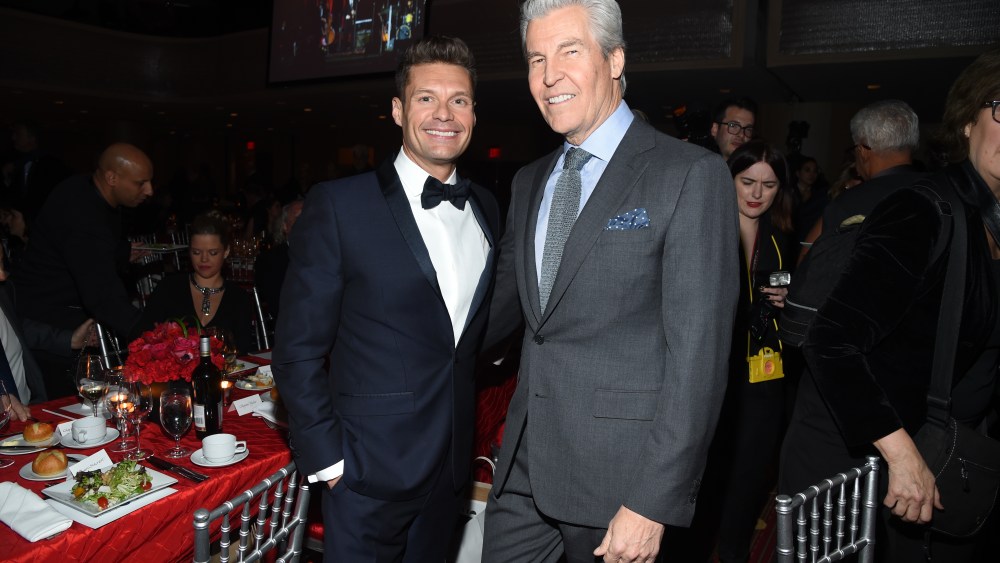 Everyone knew Wednesday’s gala at the Marriott Marquis honoring Terry J. Lundgren and supporting the FIT Foundation and the University of Arizona’s Terry J. Lundgren Center for Retailing, would be huge, given Lundgren’s popularity and Macy’s clout. Yet it still surpassed expectations, drawing 1,000-plus guests, raising more than $4.5 million for the schools and generating piles of praise for Lundgren, who this week stepped down as Macy’s chief executive officer, passing the baton to Jeff Gennette and shifted to the transitional role of executive chairman.

RELATED STORY: Moving Up: Jeff Gennette on His Plans for Macy’s

Appearing in person or on-screen were, among others, Sean “P. Diddy” Combs, Robert Kraft and Ryan Seacrest, who hosted the evening and sells his clothing line at Macy’s, as well as former Mayor Michael Bloomberg, who called Lundgren his personal shopper who covered him in clothes. “Thank God Macy’s has a good return policy.”

In a rare public appearance, Ralph Lauren said, “I don’t know anyone in this industry who could fill up this room like this. Terry, you hit a home run.”

Anna Wintour said that thanks to Lundgren, she once found herself schlepping to a Macy’s branch in Flushing, Queens, to kick off a Fashion’s Night Out event. “There was no other option than to be there at Macy’s and this was because of Terry.”

“What an amazing journey,” said Michael Kors, referencing Lundgren’s long career at Macy’s. “And he looks like a goddamn 1940s movie star.”

“He’s always been there from the beginning of my career,” Vera Wang said.

“He’s handled every situation with calm and grace — and not a hair out of place,” said Lundgren’s wife Tina.

“That Blue Mercury purchase was brilliant,” said Leonard Lauder, who on the red carpet earlier in the evening recalled the Macy’s acquisition in 2015. “Terry knew Macy’s needed small, start-up brands and that was the best way to get them. I’ve known him since he first started his career at Bullock’s in Los Angeles. I followed him every step of the way, and he’s been brilliant every step of the way.”

The run of tributes concluded with Combs on-screen singing “Happy Birthday” to Lundgren, who just turned 65, and chef Daniel Boulud personally presenting Lundgren with a birthday cake in the form of a stack of chocolate golf balls.

Lundgren began his speech roasting Seacrest a bit. “What you might not know about Ryan is that he produces great educational television like ‘Keeping Up With the Kardashians.'”

Turning serious, Lundgren gave shout-outs to his family, his mentors — the late Sy Stewart and the late Stanley Marcus, as well as Michael Steinberg and Allen Questrom — and his successor as ceo, Gennette. “I loved working with Jeff, for a long time.”

Lundgren also recounted that none of his siblings or parents went to college, but somehow he decided to, and had to work his way through much of the experience after his father cut him off for having too good of a time and neglecting the studies. Lundgren ended up shucking oysters and peeling shrimp in a restaurant to pay his tuition. “I needed to learn that lesson,” Lundgren said.

Then he suggested to the crowd to not think of their support for the schools as donations. “Think of it as an investment in innovation that will propel our industry.”