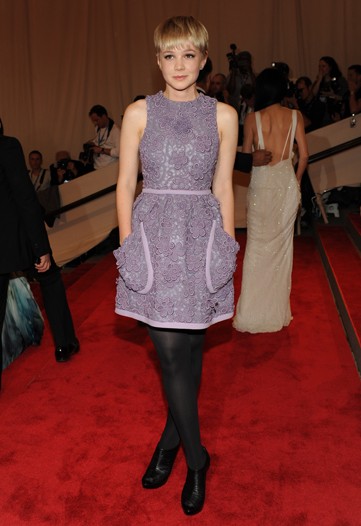 When it comes to dressing, the theme of the Metropolitan Museum of Art’s annual Costume Institute gala, “American Woman,” left guests with two options: Be the patriot or promote international relations.

Firmly in the first camp was Diane von Furstenberg, whose frock was literally star spangled. “I am the Statue of Liberty,” she said with pride. Joining her were Taylor Swift and Jessica Biel in Ralph Lauren, Brooke Shields in Michael Kors, Mamie Gummer in Donna Karan and co-hostess Oprah Winfrey in Oscar de la Renta (he may not have been born in the U.S. of A., but he is one of its proudest citizens).

And what’s more American than the humble baseball cap, like the one worn by Marc Jacobs? His choice, however, had nothing to do with patriotism. “I had hair transplants,” he said. (And in another sports moment, Eli Manning and Tom Brady greeted each other with a big hug. So Super Bowl XLII is clearly forgiven.)

The patriotism was enough to make the Europeans in attendance green with envy. “There’s something really relaxed and comfortable about their style,” said Emma Watson in Burberry. “They don’t try too hard.”

“There’s a sense of richness that you have here on so many levels,” said Marion Cotillard in Dior. “You have a good mix of the high and the low.”

And then there was Katy Perry, who flew the flag for American individuality. Her electric gown came from a shop in France called Cute Circuit and had flashing lights, presumable enough to get her through the evening. “I have backups,” she said. “But I do feel like a terrorist wearing all these batteries.”