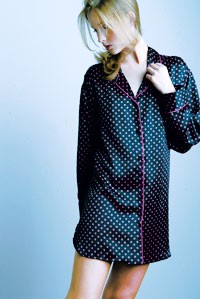 NEW YORK — The fifth edition of Lingerie Americas is sure to be packed with an eclectic mix of upscale designer brands and young, contemporary labels from the U.S., Europe and South America.

The intimate apparel trade show began primarily as a vehicle for better and high-end foundations, but since 2002 it has expanded to include categories such as daywear, shapewear, sleepwear, at-homewear, robes, swimwear and legwear. See WWDLingerie Americas photo spread.

Scheduled for Aug. 1-3 at the Metropolitan Pavilion & Altman Building here, the number of brands to be showcased has increased to 245, compared with 180 in March and 180 in August 2003. Show organizers have expanded the overall space for exhibitors to 45,000 square feet from 40,000 square feet. The additional 5,000 square feet will be in the Summer Gallery on the fourth floor. Forty exhibitors will be ensconced in the new area, which will feature complimentary soft drinks, ice cream and sorbet for buyers, as well as gift bags. Retailers will also be offered free breakfast and lunch.

“This will be our largest show to date since August 2002, when 75 brands were exhibited,” said Jean Luc Teinturier, who manages the French owned and operated fair with his wife, Laurence. “There will be 128 high-quality sleepwear brands. Two-thirds of overall exhibitors represent North America, of which 60 percent are U.S. brands.” Most of the remaining 35 percent of exhibitors are from France, Italy, Germany and the U.K., as well as a smattering from Latin America.

Among the new intimate apparel and bodywear resources who will be exhibiting at Lingerie Americas are Puma, Les Caprice de Marie, the licensed Oscar de la Renta foundations by Kellwood Co., Luxe Lingerie, a California resource, and Italian licensees Blumarine and Versace, both of which will be distributed in the U.S. by Le Bonitas.

Late last week, preregistration at the intimate apparel fair totaled 2,450 retailers, said Teinturier. They represent major department and specialty stores as well as boutiques, catalogues and e-commerce businesses. Show organizers reach out to retailers through an aggressive marketing campaign that includes 8,500 mailings as well as a constant flow of e-mails, faxes and phone calls.

“The number of buyers from upscale day spas and resort spas is a growing niche segment,” Teinturier said. “The spa business has a captive clientele and we are trying to attract them [spa buyers] as well,” he said. He added that the number of swimwear vendors has doubled this year to 60, saying, “The swimwear brands are from nine countries, and some, such as Shan from Canada and Pain de Sucre, a French resource, are launching their first intimate apparel collections at the show.”

Regarding the overall sentiment of retailers, Teinturier said: “The mood is very positive. Business seems to be picking up for sure, and retailers appear to be happy that business is back on track. And the relationship between exhibitors and our show organizers is very positive. We are in a constant dialogue, and we are open to new ideas and suggestions.”

As for what retailers are seeking for spring-summer 2005, Teinturier said, “They’ve said they definitely want to find new brands and new collections, and at the same time reacquaint themselves with existing brands. Our show represents a good forum for private label — exclusives — because the atmosphere is intimate, discreet. Retailers feel it’s the right ambience, a forum to meet new people and current vendors.”

In terms of solidifying vendor partnerships for the U.S. market, Teinturier said, “We decided to accept exhibitors from Europe who have a subsidiary, distributor or agent in the U.S. We’re very careful in accepting an exhibitor who should have the right setup in place in the U.S. Part of our mission statement is putting people together to meet with potential partners, and that’s done usually two to three months before the show.”

A seminar at 4 p.m. on Aug. 2 will feature Bill Hoffman, vice president and director of Retail Merchandising Service Automation, a 47-year-old business that focuses on inventory management and forecasting for retailers nationwide. The seminar, titled “Maximizing Your Sales Through Sound Inventory,” will be in the downstairs area of the Altman Building.