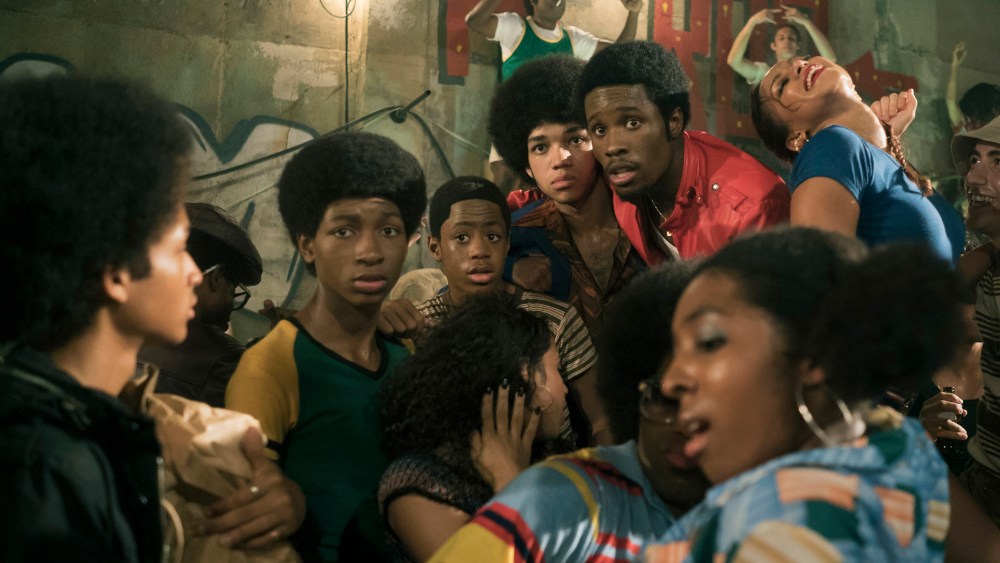 San Juan was brought on to work with Martin to bring to life the sartorial side of Luhrmann’s epic debut on television, “The Get Down,” premiering on Netflix on August 12. The show is the hotly anticipated, much-covered and exceedingly over budget series set in the Bronx of the Seventies. It follows a group of teenagers who use music to navigate their early adult lives, and the era’s music industry in New York as well.

San Juan, tasked with the high-stakes job of realizing Luhrmann’s vision, proved up to the challenge. A graduate of FIT, she returned to her original love of costume design after a stint at Ralph Lauren, an internship with the “Saturday Night Live” costume department and a summer assisting Broadway designers at the Williamstown Theater Festival. She came to Luhrmann’s attention after working with producer Kerry Orent on the FX series “Sex&Drugs&Rock&Roll,” and a year and a half later, the show is finally set to make its debut.

Here, she talks about Luhrmann, the show and the world of TV.

WWD: This is the first time someone other than Luhrmann or Martin did the costume design; how did you get involved?
Jeriana San Juan: This is his foray into television, and television is a very different day-to-day than doing film. It’s a lot more intensive, and it’s sort of like a runaway train — you do as much as you can to load and prep, get the coal ready, all that — but once the train is off, it’s off. And you have to be moving and thinking at a pace, and thinking on your feet, and solving problems all the time — my schedule is pretty rigorous during a television show. I’ve done it before, and I’ve done it successfully. I also came from a background in fashion, so I think that’s part of why we understood each other. I understand the process of dressing more for fashion instead of costume sometimes, or skewing costume in a way so it feels very desirable and fashionable.

WWD: How did you go about deciding what the costumes would look like?
J.S.J.:  The show is very rich with inspiration. It’s set in a time where there was this big bang of culture; incredible music came out of this, incredible dance, incredible style, incredible art — street art, graffiti. So with such a rich history, I really had to study up on it and do my research. Baz had already done 10 years of research on this specific genre; on this period, on the Bronx, what was happening socially and on the political landscape at the time.

We pulled from the time period — certain iconic things that I felt needed to be portrayed in order to honor all these wonderful things about the time period. Most of the things you’re going to see on the show have been pulled directly from research, down to Ra-Ra [Skylan Brooks]’s tube socks and high-top sneakers, to the way Dizzee [Jaden Smith] might fold up one of the legs of his jeans, to the fur-collar stole that he wears off his vest. Those are all pieces that are directly lifted off of inspiration and research from the time period.

WWD: Which certain costume moments stand out to you?
J.S.J.: Certainly the white suit that Cadillac [Yahya Abdul-Mateen II] wears. That suit came off of a Jet magazine cover; it’s this amazing cover where this guy is wearing an all-white suit, and wearing a matching white hat and he just looks like a full-on gangster. And I love it! It was the quintessential look, sort of a pimp-disco look. And on Yahya, it looks incredible. When you put a well-tailored suit on that man, he is unstoppable. It was a pretty incredible moment.

I found this beautiful brocade fabric, and because [Yahya] is kind of animalistic in his character, he always sort of feels like he is on the prowl. So because of that I always tried to have a hint of animal print on his clothes, even if it’s just the lining. Whether it was a snake print, or a cheetah print, or a lion’s head detail, there were always some little elements. I found this amazing gold and white brocade that was almost like a crocodile skin print, that was woven into the fabric. It was a little gaudy, but I turned it upside down and on the other side was this perfect combination that was predominantly cream, but with the texture and little gold lines that run through. So I bought every last yard that existed in the world and I made four full suits out of it.

WWD: Are there specific designers that really stood out to you for inspiration?
J.S.J.: I really gravitated towards designers for whom there is something iconic about the look, that really feels quintessential of the late Seventies. Ossie Clark was a huge influence for the prints and patterns. Halston, for example, was a huge influence, or Diane von Furstenberg, with wrap dresses. Adele Kipling wears a wrap dress in the pilot, and that wrap dress is actually from Diane von Furstenberg’s archives. Halston opened up their archives as well, and the dress that Mylene [Herizen Guardiola] wears to the disco is a Halston original design from the late Seventies. It was a white sequined dress, it very much had some wear-and-tear and was almost to shreds, but I loved the design of it and when Herizen tried it on, it looked divine. So with a few little tweaks we copied the design in a jersey.