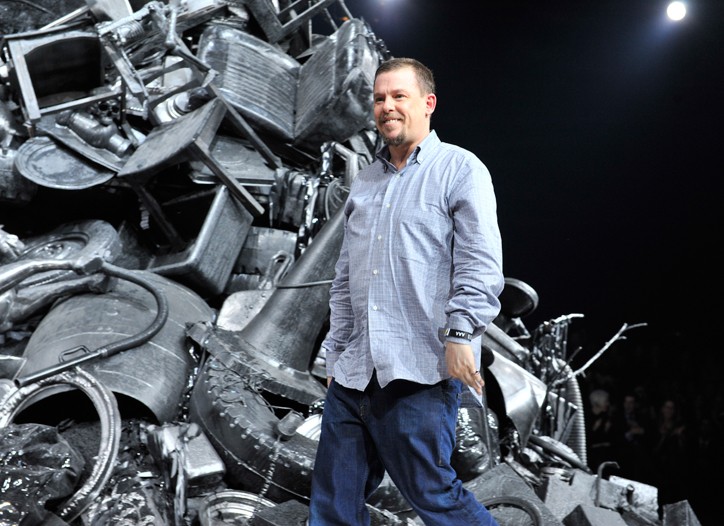 With a global financial crisis as the backdrop to the fall collections, one of the biggest questions hanging over the shows was if designers would play it safe or stick their necks out.

From the moment the fashion pack arrived at Alexander McQueen’s venue and encountered the set— a steaming mound of blackened runway props of yore atop a cracked-mirror runway— it was clear this designer was in the mood for something fierce.

“I wasn’t born to give you a twinset and pearls,” the designer deadpans.

Instead, he unleashed a full-strength, hard-core McQueen experience, complete with killer heels, theatrical makeup, bone-shuddering music, preening models and— of course— breathtakingly dramatic clothes, from wet-look dresses made of a material resembling garbage bags to don’t-mess-with-me peak-shouldered coats.  If other designers have recently homed in on McQueen’s signature brand of power dressing, he laid down a gauntlet with his nuclear-powered dressing.

“People need escapism in times like this,” he says over the line from his London studio, about a week after having celebrated his 40th birthday at private members’ club Shoreditch House. “Fashion should be a form of escapism, and not a form of imprisonment. It’s time to let loose a bit. [People] don’t want to look at a two-piece suit with a wide belt. They want to see something that takes them away.”

The son of a taxi driver who once described himself as a “big-mouth East London yob,” McQueen launched his signature label in the early Nineties, another period of tough economic times. In preparing his fall collection, titled “The Horn of Plenty” and based on the concept of reinvention and recycling, the designer says he watched a lot of news and was inundated with the unfolding subprime mortgage crisis and its worldwide aftermath. Mostly he became bored of “this money situation” and decided to “do something crazy.”

“You know that everyone’s sales are going to be down 20 percent anyway. You may as well make a statement,” he shrugs. “I just wanted to make a point that the situation was not of my own doing, to make a statement about myself and the reason why I work in fashion.”

The silhouettes and prints were innovative, bold and eye-popping, including a bustier dress in an awning stripe with the skirt fanning up over one shoulder. “Any black with a red or orange stripe is a sign of warning, even in the animal kingdom,” the designer growls.

Famously contrarian, McQueen says he figured the compulsion of most designers would be to follow well-worn paths, which he toyed with in witty and powerful send-ups of bourgeois French fashions and his own archive. The use of houndstooth— or “dog’s tooth,” as McQueen calls it— symbolized this retreat to the safety of classicism. McQueen took it “to the edge” and had the “teeth” morphing into magpies in a nod to mind-bending Dutch artist M.C. Escher. He then sculpted these printed fabrics into wicked jackets and siren-worthy gowns.

“I don’t think it helps anyone to be safe,” he says, characterizing tweaking an old standard or doing a best-selling look “in a different color” as no way to kick-start a stalled economy. “Just because it’s classic doesn’t mean you can get people to part with their money. When there is this climate, people seem to revert into themselves and regurgitate the same old ideas…the tried-and-tested formulas,” McQueen explains in his take-no-prisoners parlance. “You should really put a brake on old ideas, so I put them in a pile of rubbish. If I could have, I would have set fire to it.”

No need. The fashions were incendiary enough.

“He proves to be able to tap into a bottomless well of vision and skill, bordering on a savant’s mad genius,” enthuses Bergdorf Goodman’s Linda Fargo, senior vice president of the fashion office and store presentation. “It’s a very rare and potent punch, and very welcome in this new no-frills era of zero tolerance for risk and fantasy.” Fargo says she can already envision one of his “gaga showpieces” in Bergdorf’s holiday windows.

Barbara Atkin, Holt Renfrew’s vice president of fashion direction, calls the show a rare moment of fashion brilliance, “lavish and unconventional, disturbing and yet beautiful at the same time.” What’s more, she also applauds McQueen’s Darwinian pretext that “only the strong will survive” and “not taking a risk is the biggest risk.” Already, Atkin decided to put McQueen’s exit number one on the cover of its Holts magazine next season.

“We bought some of these fantastical pieces from the runway along with more commercial looks,” she says. “His innovative approach to fashion has given him a strong signature, turning him into an authentic brand with a clear message, hence a strong following.”

McQueen chief executive officer Jonathan Akeroyd declines to give figures, but says sales of the collection were in line with expectations, from runway showpieces to more commercial interpretations. Look number one, a houndstooth skirt suit, was a bestseller, along with a houndstooth chiffon dress and an evening gown made of red feathers that retails for 7,400 euros, or $9,800 at current exchange. Akeroyd said show pieces represent about 35 percent of total sales for the season, with commercial interpretations, including a houndstooth jacket and lamé dress, both retailing for less than 1,000 euros ($1,320), among the most popular.

Women’s ready-to-wear remains the cornerstone of McQueen’s business, which is part of Gucci Group, but Akeroyd says the company is today more diversified, with handbags and shoes generating 30 percent of revenues and men’s wear 20 percent. The company remains profitable and in 2009 will focus on building its in-store shop presence in Japan, a key market, and building the McQ brand, licensed to Italy’s SINV since 2006 and considered a “massive opportunity,” Akeroyd says, noting it is already carried in about 400 doors. Still, McQueen’s runway remains the engine of the company’s image: rich in cultural references and haute craftsmanship, echoes of the designer’s stint as Givenchy’s couturier from 1996 to 2001.

Recently, the designer has been flexing his design muscles by engineering prints, a complex process that involves weaving fabrics into the dress patterns so that they appear in the exact places the designer envisions: no small feat when it involves placing Escher-like exploded houndstooth on the balloon sleeve and bodice of one of his spectacular gowns. “It’s a nightmare for the printers and weavers,” the designer says.

While some detected a whiff of Eighties performance artist Leigh Bowery in the collection, McQueen says his key references were the documentary films Paris Is Burning and The Cockettes, which, in depicting the dress-up antics of hippies, drag queens and gay men, tapped the source of Bowery’s oeuvre and expressed the unbridled joy of dressing up. Matthew Bourne’s Swan Lake inspired the “ugly duckling” feathered creatures that ended the show, while the makeup referred to a scene in Terry Gilliam’s futuristic film Brazil, which depicts a woman stretching her face into a ridiculously large smile. “It’s all very deep,” McQueen explains with a laugh. “It’s about this passion for fashion, and it’s about the craziness and the things that do push my buttons.

“I wanted [the show] to be strong because you need to be strong in these times,” he adds. “It was time to sweep up the rubbish and make a new start. You’ve got to put away the dead wood and plant new trees.”