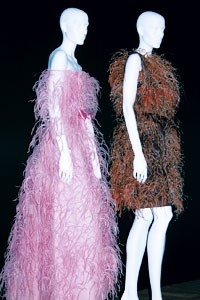 NEW YORK — Handling wild animals is a dangerous sport, as “Crocodile Hunter” Steve Irwin would attest on the Animal Planet. So would Andrew Bolton, even when the animals are confined in a glass zoo in the basement of the Costume Institute at the Metropolitan Museum of Art.

The accent is British, rather than Australian, but Bolton, the institute’s associate curator, approaches his prey with the same sense of caution and awe as a tracker, describing a pink confection of Balenciaga ostrich plumes or a Thierry Mugler jaguar-spotted catsuit as if they might pounce.

For his latest show, “Wild: Fashion Untamed,” opening today, Bolton set out to explore the animal kingdom and its relation to fashion, demonstrating how the various skins, furs, feathers and animal prints have evolved as inspirations and visual effects in design. He discovered in his research an interesting pattern upon which the exhibit is based — that the rise in popularity of animal embellishment tended to occur at moments of political turmoil, including in the mid-18th century, the 1920s, 1960s and the present.

“It’s unlikely that it is a coincidence,” Bolton said. “Certainly, animal prints are about the assertion of an empowered personality.”

The idea for the show was put forward by Richard Martin, the Costume Institute curator who died in 1999. Martin wanted to do a show themed around the “Costume Institute Zoo.” Bolton revived the concept upon seeing a broad return of animal prints in fashion, as well as the heightened interest in fur in recent years. He garnered financial support for the show from Roberto Cavalli, a designer who is to animal prints what a duck is to water. Cavalli, who is in town to open the show with a party tonight, said his personal interest in fashion animality is not politically motivated, but rather derives from his interest in beauty found throughout nature, such as flowers. John and Laura Pomerantz are also financing the exhibit.

“There are so many beautiful things that could be a nice inspiration for fashion,” Cavalli said. “For sure, the animal print is so special, beautiful and colorful, especially the feline. But what the Met exhibit does is show that there are the same inspirations to designers in more than one century.”

“Wild” takes a long-term approach, telling the history of fur in one vitrine, referencing what Bolton described as a primordial influence in the use of raw leather in another, and dedicates the largest display to “birds of paradise.” A “tigress” display begins with the predators — an 18th-century French gown with leopard spots that was last seen in the institute’s “Dangerous Liaisons” show, juxtaposed with Cavalli and Geoffrey Beene gowns with tiger-patterned paillettes. As for the prey, Bolton has included examples of Rudi Gernreich’s 1960s “Total Look,” a giraffe print tunic and tights, as well as Cavalli’s zebra printed suits. The docile creatures, Bolton said, evoke a feminine sense of coquettishness, whereas the more aggressive feline prints can be seen as symbolic of the seductress.

Either way, it’s hard to miss the connection of shimmering feathers or bold prints to their function in nature. Humans are into displaying their sexuality, just like the animals. Bolton emphasizes that point with a pair of bunny costumes, one from a Playboy waitress whose name tag, “Danelle” remains attached to her suit, the other a modern interpretation by DSquared for the men’s magazine’s 50th anniversary. There’s also a 1674 etching of a group of fur muffs and stoles by Wenceslaus Hollar, shown alongside the real things to underscore their libidinal connotations.

“Designers have employed animal prints and fur as symbolism of various ideas of femininity throughout history,” Bolton said. “But recently, fashion has taken on a much more hypersexualized look.”

Brazilian designer Carlos Miele, who provided a headdress made of macaw feathers, red silk, suede and leather inspired by elaborate styles of Amazon tribes, said the colors and textures of animal skins and feathers have been the subject of fascination throughout history for their association with power, luxury and desire.

“Five hundred years ago, natural pigments and plumage art of the Brazilian Indians were taken and integrated to the Europeans’ way of dressing,” he said. “My work does a dialogue between the primitive and the contemporary, making use of the technology of the leather with Lycra and the Brazilian indigenous handicraft.”

Bolton similarly argued that the contemporary references to animal skins has as much to do with the past as the present. Beyond any underlying reaction to the political environment, there’s the continuing influence of hip-hop culture on mainstream fashion, he said, citing Sean Combs’ appearance in Vogue in a white fox coat by Nija Furs as a symbol of wealth and male virility. Additionally, technological advancements in fur that have enabled designers to create mink and fox designs that resemble fabric have attracted a younger audience.

This is dangerous ground for the Met, making a point that would potentially provoke the anger of animal rights activists, but Bolton believes the museum takes an objective approach in its study, incorporating fake-fur looks and ad campaigns from People for the Ethical Treatment of Animals along with the classic mink coat — actually the one from Maximilian that Blackgama gave to Lauren Bacall in 1972 for her appearance in its “What Becomes a Legend Most?” campaign.