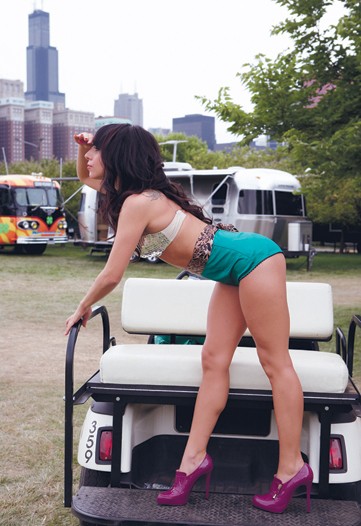 It wasn’t that long ago (August 2007, actually) that Stefani Germanotta, aka Lady GaGa, was just another fledgling pop songstress on the summer festival circuit. No blonde-bow wig, no sunglasses, no teacups. When WWD caught up with her at the Chicago music bacchanal Lollapalooza, GaGa, who had just been issued a citation for indecent exposure (“There’s a huge festival with people doing cocaine and marijuana, and he’s busting me?” she objected), stripped down to next-to-nothing for a photo shoot and chatted with our reporter about her style.

Refusing to give her birth name — WWD was the first media outlet to report this and details of her posh NYC upbringing — GaGa said of her former self, “She’s not here anymore. She’s covered in sequins.” The then-raven-haired GaGa revealed she was “not comfortable in a T-shirt and jeans,” instead culling pieces from American Apparel, stripper shops in Times Square and M&J Trimming in the Garment District to craft her look, which she dubbed “filthy, unacceptable.” Even her everyday attire had to be way out there. “It’s got to be funny. I live for being different,” the 21-year-old said.

GaGa, who performed at the festival with her DJ and go-go pal Lady Starlight, also said, “When someone sees a girl in a two-piece out on the town, people think she’s a ho. We think that’s awesome. It’s rock ’n’ roll. [Something more conservative would be] like David Bowie doing Ziggy Stardust in a sweat suit. No one wants to see that.” Of the performance, WWD wrote, “That quirkiness brightened her show, which at times could seem unpolished.” GaGa wore a homemade outfit, which consisted of a bra to which she had affixed pieces of mirror and black panties with mirrored trim. “Fashion and attitude and style, that’s what we breathe for,” GaGa said. “[Lady Starlight and I] joke that our full-time boyfriend is our vanity.”

Of her life, which in August 2007 (pre-“The Fame”) had only just begun, really, GaGa quipped, “It’s a party. Everything my [high school] friends made fun of me for is what people want more of. More sequins, more spandex, yes, please.”