LONDON — Everyone was looking to stay cozy and warm in the last three months of 2020. Data released by online shopping platform Lyst offers a glimpse of how the pandemic and a cold climate are affecting consumers’ shopping habits.

The North Face’s 1996 Nuptse jacket was the most-searched product during that period, and it was the first time the same item has topped both the Lyst Index’s hottest women’s and men’s products rankings.

Lyst said this black plain down jacket’s rise in popularity was because it combines “technical performance with a more accessible price than styles by Moncler and Canada Goose,” and “fits with the trend for ’90s nostalgia, and took social media by storm.” Search for puffer jackets grew 174 percent throughout the quarter.

Birkenstock’s and UGG’s comfy shoes also saw a big surge in search. Birkenstock’s shearling-lined Boston clogs were the second hottest women’s product with searches for the style jumping 367 percent, compared to the same period in 2019. The unlined version of the Boston appears on the men’s hottest products list in seventh place.

Demand for active and casualwear continues to be strong in the quarter, as work from home becomes the norm. Searches for hoodies were up 71 percent year-on-year. The velour hoodie from Kim Kardashian West’s Skims label was the sixth hottest women’s product, while Nike Sportswear’s classic Tech Fleece zip-up hoodie took the fifth spot on the men’s list. 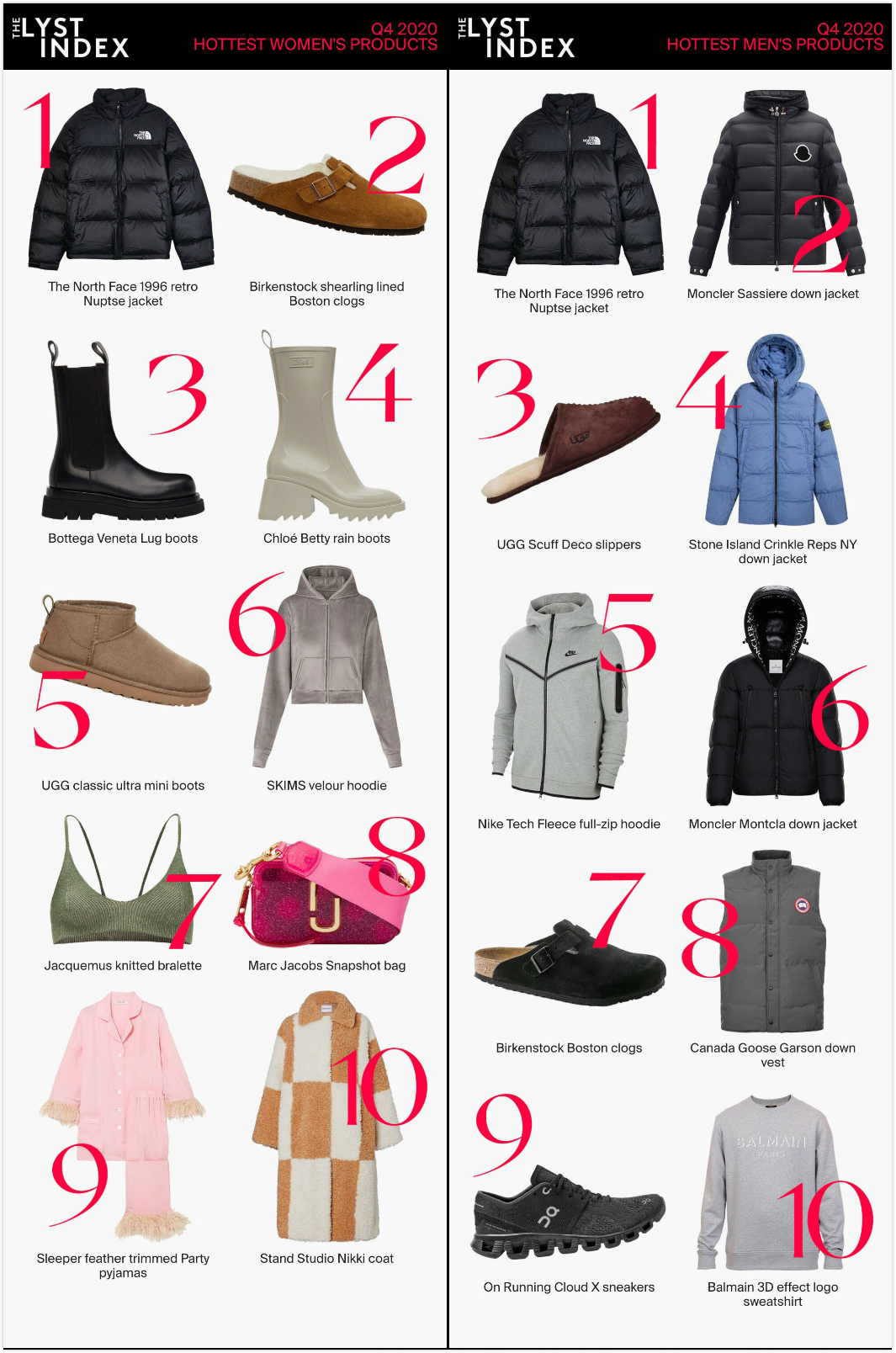 Moncler also benefited from the boom. It was the quarter’s fastest-rising brand. Having climbed 10 places into third place, it was the highest the brand has ever placed in the Lyst Index’s hottest brands ranking. The platform said Moncler’s high place resulted from its collaboration with Rick Owens and the news that the firm would acquire Stone Island in a deal worth 1.15 billion euros.

Gucci retained its top spot in the ranking. It generated big online buzz with its online fashion and film festival #GucciFest and dressing Harry Styles for American Vogue. Balenciaga returned to second place, as it continued to invest in digital-first initiatives and launched its fall 2021 collection in an online video game.

Lyst noted that the coronavirus is likely to accelerate further consolidation and supports the theory that scale helps brands to succeed today, as eight of the brands belong to the Kering or LVMH Moët Hennessy Louis Vuitton conglomerates, and several others form part of smaller luxury groups.

The Next Generation of Creatives Shaping Fashion and Youth Culture