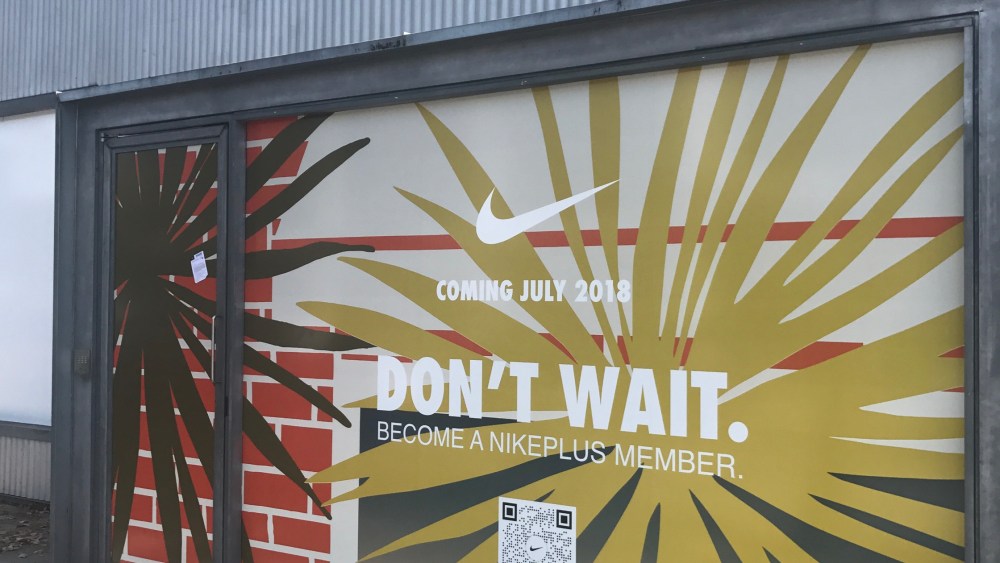 In the fickle world of Los Angeles retail (ditto Hollywood and fashion, all of which converge here), one day you’re in, and the next you’re out. Such is the case in highly concentrated areas in and around Beverly Hills and West Hollywood, where the much-watched retail thoroughfares Melrose Avenue, Melrose Place and Robertson Boulevard are nestled within a 2-mile radius.

In the latest leasing shift, which has seen the Robertson bubble burst and reinflate on a stretch of Melrose Avenue bordered by Pacific Design Center to the west and La Cienega Boulevard to the east, new tenants include The Real Real, which will open its first West Coast brick-and-mortar store in a 10,000-square-foot space at 8500 Melrose Avenue; Bluemercury, which will occupy a 2,100-square-foot space in the same mixed-use building; Nike, which will unveil a digitally led, downsized concept a block away, and across the street, homegrown contemporary brand The Great, founded by stylists and Current Elliott founders Emily Current and Meritt Elliott.

“We’ve always loved the area. We live in the neighborhood, our kids go to school here, and our office is there,” said Current. “It’s anchored now by fashion, but it already had food, drink, coffee, exercise, meditation and design. It’s sort of a hub of all the things we love.”

Bluemercury cofounder and chief executive officer Marla Beck, who like Current and Elliott is a Northern California native, said, “I grew up spending tons of time at Fred Segal on Melrose Avenue. The area says everything about what we do — wellness, fitness, clean beauty. We go into neighborhoods near where our clients live and work so they don’t have to drive far to have a nice, easy experience. Melrose is a spot.” Bluemercury opens on Aug. 1.

Nike Inc. gave the following statement to WWD: “As part of our commitment to serving L.A. consumers, we will be opening a unique new retail destination on 8552 Melrose Avenue this summer. Powered by the Nike app, the new store combines physical retail with a digitally led service experience, and will feature a curated assortment of premium products inspired and informed by the city.”

The founder of fellow fitness brand Sweaty Betty further articulated Melrose’s appeal. “Opening stores in Los Angeles was always an aim when I started Sweaty Betty in 1998. L.A. perfectly embodies the active lifestyle we represent. I love coming to California because this is where so many food and fitness trends are born, so I always try out new classes and juice bars when I’m here. Melrose Avenue is one of my favorite areas. I love the vibe there and I’m obsessed with our location as it’s right next to Urth Caffé. Then you’ve got Rise Nation, Moon Juice, Joans on Third and Runyon Canyon around the corner — it’s just a hub of wellness that we’re so excited to be part of,” said Tamara Hill Norton, the company’s creative director.

While The Real Real couldn’t elaborate as of press time, news of the Los Angeles store was revealed at WWD’s 20/20 Retail Forum on Wednesday, and the brand confirmed Thursday that the store will open in late July or August. The move is in line with the company’s statement-making store in New York’s SoHo, opened almost a year ago. The building, a modern, white and glass structure, sits at the highly trafficked corner of Melrose Avenue and La Cienega Boulevard, across the street from another modern building that houses Alice + Olivia, Cutler and Gross and MAC. The all-glass, street-level corner storefront will give The Real Real an impactful physical presence.

The three-block stretch is home to Rag & Bone (one of the first apparel retailers to come in more than five years ago), Zadig & Voltaire, Sweaty Betty, Untuckit, All Saints, Restoration Hardware, Vince and Lululemon. Last month, U.K. fast-fashion e-tailer PrettyLittleThing confirmed it would open its U.S. headquarters here, along with an “influencer lounge.”

It should be noted that Vince and Lululemon used to be on Robertson Boulevard (All Saints still is) and were among the mainstream brands vilified by independents for signaling the end of the “cool factor” on the street. That is related to landlords and rents, which at their peak of $15 to $20 a square foot were only affordable to larger brands. James Perse, who is taking the 11,000-square-foot former Ralph Lauren space on Robertson, criticized landlords for not curating their retail tenants with an eye to developing the street, which he hopes his presence will kick-start once again.

Melrose offers a more varied mix of exercise and high-low food and drink options than Robertson ever did (the anchoring structure across from Perse, Robertson Plaza, is also in the throes of reinvigoration and recently welcomed scene-y restaurant The Henry, while Peri Arenas’ Peri A. boutique is next door).

Even beyond the three blocks welcoming the newest tenants, Melrose Avenue (not to be confused with Melrose Place, which intersects Melrose Avenue east of La Cienega Boulevard) is thriving. One block west there’s a Warby Parker, three blocks farther a Chrome Hearts, and west of Pacific Design Center is longtime designer emporium Maxfield, James Perse, and their newest neighbors, Bathing Ape and Acne.

“On Melrose, deals are now done at $15 to $20 per square foot, per month; Robertson has come down to $6 to $7,” said Jay Luchs, vice chairman of Newmark Knight Frank, who brokered all the deals mentioned here. Luchs pointed out that when an area is owned by just one or two landlords, who have a specific vision for the street, it can develop more quickly and cohesively versus a street like Robertson, where various landlords have different objectives, typically landing the highest rent versus the chicest tenant.

“For a brand like Rag & Bone that was the first on the street, I don’t think the development is changing business for them. The landlords and I have tried hard to make it as cool as we can, but residents and people already like the area. It’s very mixed, very special. It’s where entertainment and influencers come together with fashion and Hollywood and it’s only a few blocks. It’s central and very sought-out,” Luchs said.

Indeed, there are only a handful of vacancies left, much like on Melrose Place.

What that means for the future, of course, is that retailers will have to find the next spot where there are still nearby vacancies and affordable rents. Robertson Boulevard should be getting camera-ready for its second act right now.