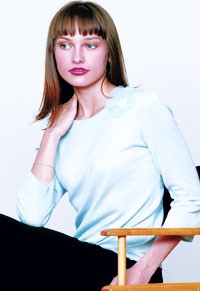 NEW YORK — Kohl’s Corp. has numbers on the brain.

Having battled tepid or sagging financial results for the last year, the retailer aims to turn the figures around by upping its fashion quotient with the launch this fall of apt. 9, a new proprietary label with a modern twist, and a slate of other initiatives.

By virtue of Kohl’s 589 doors, each of which will have 12 to 14 fixtures devoted to apt. 9 in women’s, the September launch of the brand weighs in as one of the biggest of the season. Apt. 9 also rolls out in men’s for fall and will eventually go into accessories, footwear and home.

The retailer enjoyed darling status on Wall Street during its breathtaking expansion, growing from just 40 stores in 1986, but faltered last year with a merchandise mix that focused too much on traditional looks. This fashion misstep contributed to same-store sales declines and an inventory backup.

With apt. 9, Kohl’s hopes to take back some of the business that has trickled off to the likes of J.C. Penney and Target, both of which have moved to improve their offerings. Target has generated a lot of buzz lately with its Isaac Mizrahi line, which has managed to capture a fashionable image despite its discount prices.

Kohl’s also has employed celebrity to draw more updated shoppers to its stores. The retailer is continuing to roll out the collection named after TV personality Daisy Fuentes after a limited introduction in the spring. The chain hopes these and other initiatives in women’s, such as the introduction of cosmetics by Estée Lauder Cos. for fall, will help boost financial results. Representing about 30 percent, or $3 billion, of the firm’s sales, though, women’s is only part of the picture.

“There are a lot of initiatives going on in women’s, but there’s a big store, and we’re not relying on women’s to single-handedly carry the day,” said Mansell, who sees apt. 9 as a significant opportunity in men’s as well. “I don’t want to minimize the women’s importance, because our customer is a woman — so what we do for her always has to be top-of-mind for us.”

Many of the changes at the retailer flow directly from a poor financial showing in 2003 —when comparable-store sales fell 1.6 percent — and the introspection and customer research that followed.

“It caused us all to take a much more critical analysis,” Mansell said.

The result of the self-examination was a drive to more specifically fulfill the Kohl’s customer’s needs, including the launch of Urban Pipeline — a men’s and boy’s beach-oriented brand — in the spring, apt. 9 this fall and other targeted merchandise programs still in the pipeline.

“This can’t be a one-time thing,” said Mansell. “The entire company has realized that there has to be continual change.”

This strategy has taken some time to kick in, though.

“Their [comp] sales trends have been soft, and June again was negative, so turning the tide on that seems to be a major challenge for them,” said Fitch Ratings debt analyst Philip Zahn. “Bringing in these new private label brands takes a little time. It’s not the kind of thing where they can reverse the trend in a short period of time. They’re on the right track, but it probably will take a little while to realize the benefits of that.”

“There are tops and bottoms that will be merchandised as separates that the customer will be able to put together,” said Mansell. “Some of that product was available at Kohl’s, but wasn’t organized for her properly or marketed together or merchandised together.”

The retailer designs the lines in-house and handles some of its own production.

Even though lower-priced stores such as Kohl’s have gotten more in touch with trends and are catching up to hot looks more quickly, consumers are far from confusing their apparel for high fashion. There has been some mixing of high and low in the fashion industry, such as Mizrahi’s recent runway show with designer-priced fashions mixed in with low-budget looks from Target. By and large, though, moderately priced vendors and retailers have remained well within their customer’s comfort range while inching their offerings forward to be more trend-right.

“We’re talking about Kohl’s version of fashion,” said Mansell. “We’re Kohl’s. One thing we know is we know who we are.”

Some of the retailer’s fashions have left the consumer “disappointed,” he admitted.

Kohl’s is largely geared toward a female customer 30 to 40 years old with an annual income of $50,000 to $100,000, he said. “She is looking, as a result, to try to resolve the natural conflicts that come from being relatively young, growing a family, probably both spouses are working,” he said.

And while it’s expanding its updated selection, the firm is not abandoning its traditional offerings, which are still a big draw.

“We have a very strong stable, but we are going to continue to identify new brand opportunities, because we have to — and the reason we have to? She is telling us she wants continued newness,” he said.

Still, to make room for apt. 9 and this newness, Mansell said Kohl’s will trim back some traditional brands, such as Sag Harbor from Kellwood Co., Norton McNaughton from Jones Apparel Group and Villager from Liz Claiborne Inc. More updated brands such as Jones’ Nine & Co. and Claiborne’s Axcess are holding their ground in the store.

Traditionally styled apparel will go from 60 to 65 percent of the mix to about 50 percent, with the balance in more updated fashions. In addition to clearing out some space for its new brand, Kohl’s is opening its wallet.

“We are going to invest a substantial amount of money to in-store visual,” Mansell said.

Apt. 9 also will get play in the firm’s circular, TV campaign and direct mailings to holders of its proprietary credit cards.

Within the store, the updated and classic brands each will be grouped together, with the major collections having aisleway exposure.

“By doing it like that, they really have to make sure these brands have their own identity, because if they don’t, it’s just going to look like a bunch of brands doing the same thing,” said an executive at one of the retailer’s suppliers, who did not want to be identified.

But the executive gave Kohl’s kudos for the turnaround in its mind-set.

“It’s such a pleasure,” said the vendor about working with Kohl’s. “It’s all about how to grow the business. They’ve changed dramatically in the last eight to nine months. They have an inventory plan that wasn’t in existence in the past because they were growing and opening stores so fast. They changed their cadence, where they have a very firm markdown cadence and they follow it; before, it was ad hoc.”

Price promotions on women’s apparel took some steam last year from the company’s gross margin rate, which fell to 33 percent from the historical rate of about 34 percent.

While taking a wrench to its merchandise and attitude in hopes of turning the financials around, Kohl’s also has had to contend with holes in its management. At the executive vice president level, there are three open positions, one each in the stores, product development and home and footwear.

“You’re going to continue to hear us talk about judiciously and strategically adding people,” Mansell said.