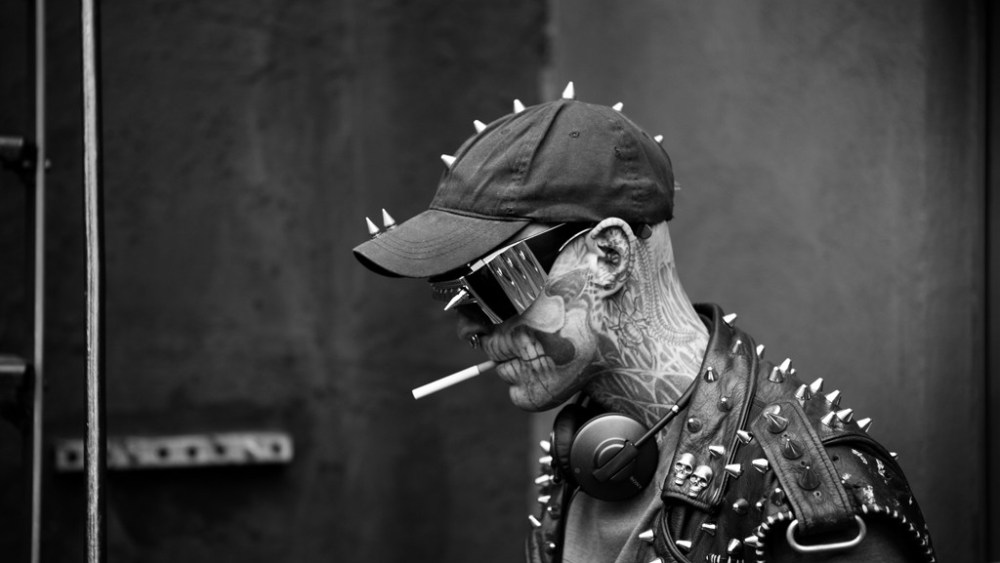 There are three topics that Rick Genest — the 26-year-old Nicola Formichetti muse, Lady Gaga collaborator, entrepreneur and, as of last week, freshly appointed spokesman for L’Oréal’s Dermablend Professional line more commonly known as “Zombie Boy” or “Rico the Zombie” — likes to talk about. They are: music; his aggregation of body-covering tattoos in an effort to resemble a living, walking, rotting corpse; and Lucifer’s Blasphemous Mad Macabre Torture Carnival, his Montreal-based “traveling circus-freak show.”

On a bright and cold morning during New York Fashion Week in February, Colin Singer, Genest’s immigration lawyer-cum-manager (his official title is managing partner of rickgenest.com), lists each on his fingers as his client smokes outside the MAve Hotel in the Flatiron District, where they are staying. Genest spent the day and the next sitting front row at runway shows for designers like Nicholas K, Duckie Brown and General Idea. Following New York, he traveled to Milan, Moscow and Copenhagen for various fashion weeks and tattoo-festival-related appearances.

Genest attended the Cannes International Film Festival last month, and the Web-based October 2011 advertisement he shot with Dermablend — before becoming its official spokesman for the next two years — is nominated for a Lion Award at the Cannes Lions International Festival of Creativity that runs until Saturday. He is the brand’s first male spokesmodel. In the Dermablend “Go Beyond the Cover” video, which ran under the tag line “How do you judge a book?” a clear-skinned Genest stares at the camera and strips nude to the waist before rubbing off concealer to reveal the bones, ligaments, insects and lung-size radioactive symbol emblazoned across his skin. The video has over 15 million hits and has spawned endless debates on Internet forums, where teens argue that he was “beautiful before the makeup” and bemoan the shallow nature of society. He has more than 60,000 Twitter followers, who voice their rabid adoration and clamor for his “Kill Me” T-shirts and flat-brim caps. His personal Web site has a merchandise section, which also offers skateboards with his image.

Genest is less a model than a “personality,” lacking the mutability of the former — his career thus far has depended on various companies with a desire to have a member of the walking dead representing their brand. The Dermablend deal is the most visible in a portfolio of associations he’s amassed with his unique skill set since his arrival on fashion’s radar two years ago. In April, Giantto watches released an advertisement featuring Genest with the tag line “Time Waits for No One.” In May, he appeared in editorials for Elle France, Die Presse and Tattoo Savage and covered Factice and Slave magazines. He has a cameo as a combative pirate in Universal Studios’ 3-D fantasy-adventure Samurai film “47 Ronin” starring Keanu Reeves, set to be released in February. This month, Tonner Doll Co. revealed plans for a Rico the Zombie Boy collectible doll, to be released for San Diego Comic-Con. He will attend the convention and sign dolls for fans.

Back on the streets of New York, the Zombie Boy is not camouflaged by his baseball hat, studded leather vest and bedazzled Stevie Boi sunglasses (Genest collaborated with the designer on the specs). Pedestrians on Madison Avenue turn to stare at the skull tattooed on his face, the innards and insects and angry words inked on his exposed arms. Genest has enormous black headphones over his ears and is jabbing the air and gently rocking back and forth in a heel-toe move. He’s in a mosh pit of one as he listens to Cypress Hill, who he later says are “pretty good.”

On the roof of the MAve Genest sits in a plastic folding chair and lifts his chin slightly as if ready for a punch. He gently thumps his seat with the heel of his hand like a heartbeat as he talks. He has the manner of someone who’s always aware of the exits in case he needs to make a quick getaway. The awkwardness disappears when it is time for the photo shoot.

“Comes with having a reflection, I guess,” Genest says of his natural poise, as he performs a move referred to in gymnastics as an “inverted Iron Cross” on the fire escape and everything falls out of his pockets.

“I got my first tattoo, an outline of a skull and crossbones, when I was 16,” Genest says, pointing to his left shoulder and exposing a long thick scar down his right forearm. “I’d always wanted tattoos. I’d see them on the bus or on TV or in movies.”

His knuckles read “EVIL” and “DEAD” — “It’s like, if you’re dead, you’re evil at the same time,” he says — and his right forearm reads “THE SAW IS FAMILY” near the scar, the meaning of which he doesn’t address. In a 2010 interview with Canadian magazine Dressed to Kill, Genest alleged that the Montreal police broke his arm after he stole candy from a convenience store.

Formichetti found him through Facebook after reading the profile, hiring him for the Thierry Mugler 2010 campaign and flying him to Paris for the men’s show.

“I love New York…Ever since I got my passport the world’s just kind of opened up,” Genest says, citing a preference for Spanish culture over French.

“It’s a little too classy,” he says of Paris. “I like more getting down in the dirt, you know?”

Over the past decade, Genest has spent tens of thousands of dollars on the tattoos, which he refers to as “[my] project…if I get a couple of weeks off I’ll go get more. I’ve got a couple of blank spots, I’ve got to finish my project. It develops, you know, with time.”

He estimates that over 80 percent of his body is inked, and says that the most painful places were his eyes, nose, ears, throat and pressure points.

The decision to get a tattoo takes an instant, the actual inking usually less than an hour. Prices vary on the artist and the level of complication involved. Removal procedures are imperfect, expensive, painful and generally take months, if not years.

“I don’t wear [concealer] except in the ads, and some fashion shows,” Genest says.

He cites the timing of his first tattoo with “around when I started living downtown [in Montreal],” when he joined a group of his friends (they now comprise the rest of Lucifer’s troupe) on the streets. He made money as a “bum, a squeegee boy.” Genest’s carnival act involves lying on a bed of nails and some “flesh-pulling techniques.” His fellow troupe members spit fire and swallow swords, among other performance pieces. They perform in English and French. It seems to be the only profession that he actually wants.

All he will say of future endeavors with Formichetti and Lady Gaga is that they’re “going back and forth.” Of the Dermablend deal, he shrugs, “It’s cool.”

Genest is not worried by the notoriously fickle nature of the fashion industry, whose sudden acceptance and support could just as quickly disappear.

“I respect the industry,” he qualifies. “I’ve always surrounded myself with artists. I’ve always loved being around the art scene and the fashion world and designing sets and props and all of that. That’s all showmanship, that’s all art.”

Ever the performer, Genest is currently pursuing DJing acts alongside a possible career as a recording artist. For a person who has so wholeheartedly embraced his own finality, he puts few limits on his future. “Music sounds great, I’d love to cut an album, but I’ve got to learn how to do the kind of music I like. I’ve got to figure it out,” Genest says, when questioned about life beyond modeling.

“I’ve got to learn how to do stilts,” he perks up. “I want to stilt walk. When the fashion show is over, I want to go back to the circus.”