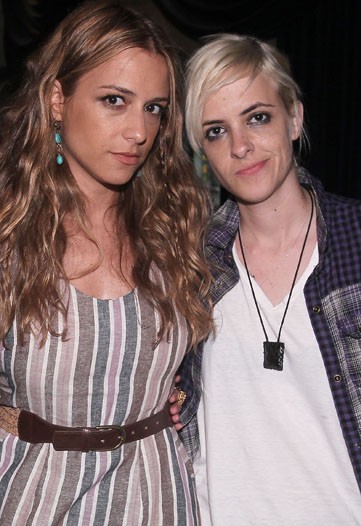 THEY ALL HEART RONSON: The Spare Room at the Hollywood Roosevelt Hotel was transformed into a hipster rec room for J.C. Penney’s bash celebrating the launch of a dedicated Web site for the I [Heart] Ronson line on Tuesday. As pizza slices and grilled ham and cheese sandwiches were passed around tables dotted with lollipops and playing cards, designer Charlotte Ronson’s twin sister, Samantha, knocked down a few pins in the Art Deco-inspired bowling alley before returning to the DJ booth. Nicole Richie, Jordana Brewster, Nicky and Paris Hilton, Monet Mazur, Jessica Paster, Danny Masterson and other guests were hug-happy as they reunited with one another. When she’s not collaborating with big sister Jessica on a tween line, Ashlee Simpson said she was writing songs for her new album, slated to be released next year.

Charlotte Ronson said launching the IHeartRonson.com site was part of a slow, steady process following the introduction of the young contemporary line two years ago. New categories are gradually emerging, such as denim for fall. Ronson was curious to see what would transpire with Ron Johnson, Apple Inc.’s senior vice president of retail, who is set to become Penney’s chief executive officer in November. She started with a wish list for Johnson. “Hmmm, I want…” she said, before squealing in girlish giggles, “No!”

GIORGIO ON THE LOOSE: In classic Giorgio Armani style, the designer had some things to say after his men’s wear show on Tuesday, which capped Milan Fashion Week, throwing the Italian press into a tizzy. His outburst contested how houses such as Prada and Dolce & Gabbana make men look ridiculous and blamed the press for not being more critical about clownish styles that men don’t wear. One of the reasons, he quipped, is that “fashion today is in the hands of the banks and of the stock market and not of their owners,” stressing how he doesn’t need to do an IPO because his company is independent and doesn’t have debts, and that his clothes make men look more handsome and elegant.

PVH NAME CHANGE?: The Phillips-Van Heusen name may be on the way out for the New York-based apparel giant. At the company’s annual meeting this morning, shareholders will vote on whether to officially shorten the company’s name to the acronym PVH Corp. Following the acquisition of Calvin Klein in 2003, the company began kicking around the idea of changing its name, and the acquisition of Tommy Hilfiger last year may have added to that momentum. The Phillips-Van Heusen name goes back as far as 1881, when Moses Phillips and his wife, Endel, sold hand-sewn shirts to coal miners in Pottsville, Penn.

MENTOR MEMORIES: All top executives have had mentors at some point in their careers — just ask former Burberry ceo Rose Marie Bravo and Chanel global ceo Maureen Chiquet. On Wednesday morning, the power execs reminisced about theirs in a one-on-one conversation as part of Fashion Group International’s Tastemakers Series. Bravo cited Estée Lauder and Clinique founder Carol Phillips among her mentors. For Chiquet, who was president of Gap’s Banana Republic before joining Chanel, they were former Old Navy president Jenny Ming and former Gap Inc. ceo and current J. Crew chief Mickey Drexler. “He taught me how to be a merchant,” Chiquet recalled.

Even the best of guidance, however, didn’t stop the executives from making a few mistakes along their paths up fashion’s career ladder. “My biggest failure was that I couldn’t turn I. Magnin around,” Bravo admitted. Chiquet, meanwhile, cited how Old Navy grew into a $5 billion retailer while she was there, only to fall apart shortly after. These failures, she said, are “what make you grow the most.”

GEORG JENSEN TOASTS THE QUEEN: Georg Jensen hosted a cocktail reception for HRM the Queen of Denmark and HRH the Prince Consort on June 10 at the brand’s Madison Avenue boutique in New York City. On display were select pieces from the brand’s silver retrospective, “Centuries of Silver Icons” — on view in museum collections including the Metropolitan Museum of Art and the Louvre. Champagne flowed freely, and there was a performance by Swedish electro-pop singer Nanna Oland Fabricius, of “Oh Land,” in honor of the couple’s official visit to the U.S.

PARTY MATES: Aussie expats in New York braved outbacklike heat at the Australians in New York Fashion Foundation’s third annual summer party last Wednesday night. It was held on a Chelsea rooftop as a baking sun went down over the Hudson, where guests enjoyed snacks passed by caterers in shirts that read “Australians Do It Better” and a performance by the chorus of divas from Broadway’s “Priscilla Queen of the Desert.” Quizzed on why there seem to be so many Australians in the fashion world, Oz model Nicole Trunfio had plenty of suggestions.

“I think it’s because we feel so left out from the rest of the world — we’re really energized and stimulated to be a part of the rest of the world,” she offered. “We also have this approach where it’s not about money or winning or ego, it’s about the quality of life and having fun with it.…We’re hard workers. I come from a farm, so I’m a really hard worker. Fashion to me is like a farm.”

IT HURTS: MTV Push, CK One and face of the brand Lara Stone have been throwing parties in Beijing, London and Mexico City this spring, and for their last live music event they set up camp at Berlin’s Tape club last Wednesday night. But the trio didn’t arrive without a vocal gem, as British band The Hurts took to the stage for songs from their latest album, including “Evelyn,” “Silver Lining” and “Wonderful Life.” Meanwhile, a crowd gathered around a specifically assembled CK One box to be filmed while performing, dancing or simply jumping up and down. “We have to beat Mexico on this,” cheered a CK One model, referring to the more than 130 clips taken on the night of the party in Mexico City’s CK One box.

Berlin competed with Mexico City on another level: the heat. Inside temperatures quickly became tropical, eventually forcing partygoers to resort to the club’s half-outside space for some early summer outdoor drinking sessions, feting not only the end of the CK One and MTV Push tour but also the beginning of summertime in Berlin.

RENAISSANCE WOMAN: Belgian designer Veronique Branquinho has teamed up with luxury lingerie designer Marie Jo L’Aventure for a capsule collection of luxury underwear. Satin and silk corsets have been printed with images of Eve and Venus inspired by Renaissance masters Raphael and Durer. The collection will be launched in September and prices start from 250 euros, or $356 at current exchange.