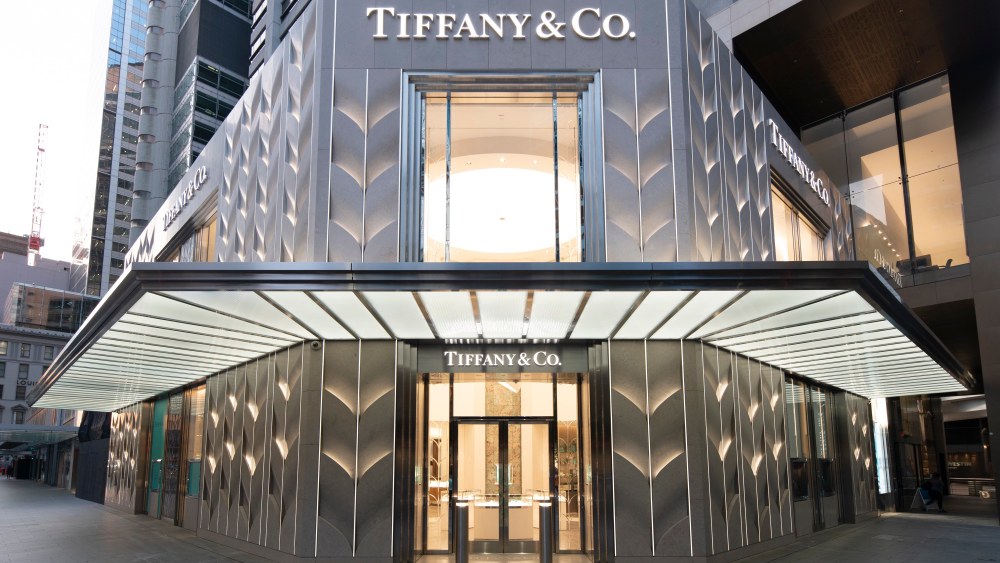 SYDNEY — Tiffany & Co. is bolstering its position in the percolating Australian luxury retail market with a new Sydney flagship.

On Tuesday, the company did a soft opening of the 24,500-square-foot store on the corner of King and Pitt Streets, with an opening party for 350 guests planned for April 4.

The new store is the third iteration of Tiffany’s Sydney flagship, the company’s key Australian location, since first entering the market in 1994 with a store at Chifley Square, before moving to 28 Castlereagh Street in 2004.

The building spans three levels and will include Tiffany’s new Oceania head office, with 19,375 square feet over two floors dedicated to retail, representing almost triple the size of the previous 7,000-square-foot store on Castlereagh Street.

Fronted by a three-story façade of carved limestone panels fashioned in the company’s signature wheat leaf pattern, the store features white marble walls with amazonite accents and is decorated with custom artworks from Australian artists.

The entry atrium boasts 33-foot-high ceilings, with a two-story-high digital wall leading up to the upper salon. There are seven private sales rooms and, in a first for Australia, a large permanent assortment of Tiffany high jewelry.

Tiffany’s new Sydney store will not only be the largest luxury flagship to open in Australia, it will also plant a beach head for luxury retail on Pitt Street Mall, the country’s busiest shopping strip and the world’s seventh most expensive retail precinct, according to Cushman & Wakefield’s 2018 Main Street’s Across the World report.

The strip has hitherto been dominated by more mass-market retailers such as Zara, H&M, Uniqlo, Sephora and Microsoft. The latter have been among a raft of international brands to descend on Australia since 2011, starting with Sydney and Melbourne and initially chasing growth in a market that was relatively unscathed by the global financial crisis — and whose economy has still not seen a recession in 28 years.

The latter has been significantly impacted by key projects in a more than 100 billion Australian dollars, or $71 billion, residential, commercial and infrastructure development boom that is under way across Sydney and which will transform Australia’s biggest city in coming years. This includes Sydney’s second casino, the new 2 billion Australian dollars, or $1.4 billion, Crown Sydney integrated resort, which is due to open in 2021.

According to the 2018 Credit Suisse Global Wealth Report, Australians now boast the world’s highest household wealth, with a median wealth of  $191,453.

According to IbisWorld’s 2018 Luxury Retailing report, industry revenues in Australia are expected to grow by an annualized 9.1 percent over the five years through 2018-19 to reach 2.2 billion Australian dollars, or $1.6 billion, with international — notably Chinese — tourists accounting for as much as 30 percent of sales.

Tourists are expected to help buoy a further 7.6 percent annualized market growth through 2023-24, to reach 3.2 billion Australian dollars, or $2.3 billion.

Australia is a key market for Tiffany within Asia-Pacific, which is the company’s  second biggest market and represents 26 percent of sales.

The company has one of the largest luxury brand footprints in Australia, with 12 stores, equal to the number of units it operates in Hong Kong.

Even before the renovation, Tiffany’s Sydney flagship consistently ranked in the company’s top 10 stores globally from a performance perspective, it reports.

“It [the new flagship] is going to be really an amazing store — it’s part of our strategy, to reinforce, upgrade and modernize the image and the network in key strategic cities,” said Tiffany’s chief executive officer Alessandro Bogliolo.

“Sydney is definitely a priority for us, for many reasons,” he added. “In Sydney we are present since a quarter of a century, it’s a long story we have there. We have a leadership position in the market, we have been a brilliant success since the beginning in Australia and it’s a city that we love, where we have a big connection with local customers and also with the culture of Sydney and Australia. On top of this, it’s also a great destination for tourists all over the world. So really it checks all the boxes as a key strategic city for Tiffany’s.”

According to Bogliolo, Australia has also been insulated from the slowdown in Chinese tourist spending outside China.

“This has impacted also partially Australia, but not as dramatically as other markets, also because in Australia there is also an important local Chinese community,” he said.

About 1.2 million people living in Australia boast Chinese ancestry — or 5 percent of the population. In 2017-18, there were also a record 112,297 Chinese students studying in Australia, up 7.8 percent and representing nearly a quarter of all foreign students in Australia.

According to the 2018 Global Wealth Migration Review published by the AfrAsia Bank in June, Australia has, moreover, been the millionaire migration destination of choice for the past three years.

Add to this record Chinese tourism numbers in recent years, which continue unabated.

According to Tourism Research Australia data, China remained Australia’s biggest inbound tourism market in the 12 months to September 2018, with numbers up 6 percent to reach a record 1.3 million — or 16 percent of the total number of international visitors.

Chinese tourist spending was up 12 percent to a record 11.5 billion Australian dollars, or $8.1 billion, over the period, representing 27 percent of total tourist expenditure.

“We entered the market 25 years ago and we have always built our business around the local customer, but there is no doubt that tourism in Australia, particularly Chinese tourism, has picked up dramatically over the past five years ” said Glen Schlehuber, vice president and managing director of Tiffany Australia and New Zealand.

“[Australia] has caught the eye of everybody,” he added. “I already know that there are several luxury brands that are going to be coming into the [Pitt/King Streets] tenancies next to us by year-end. I think it’s the power of the Tiffany’s brand to able to create and define a precinct and I think that’s what we’ve done here.”