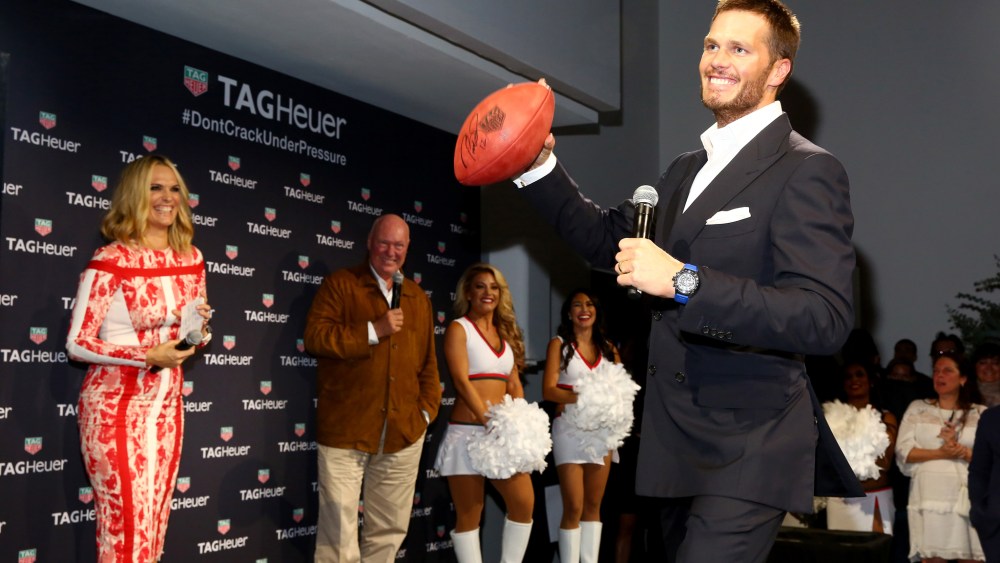 The first watch Tom Brady ever purchased was made by Tag Heuer. Now he’s a brand ambassador for the Swiss watchmaker — joining a roster that includes Cara Delevingne, Maria Sharapova and Cristiano Ronaldo. On Tuesday night he celebrated his new position at a flashy event in New York City, which model Molly Sims emceed.

“I think it was a great fit and it came about very organically,” said the NFL star, who was wearing a Tom Ford suit. “When they approached me, I thought we shared a lot of the same values like innovation. We’re always trying to be our best and evolve as a person or a company.”

Jean-Claude Biver, president of the LVMH Group watch division and chief executive officer of Tag Heuer, has lots of ideas about how the brand will utilize Brady.

“We are partners you know, so we will have events. We will probably make a special watch together because as you could already notice, Tom loves watches. He’s one of the rare ambassadors that has already bought a watch, which makes a big difference,” said Biver.

The party also marked the launch of a new watch, the Carrera Heuer-01, which Brady was wearing. The watch is the first of a new collection and features a new case, construction, design, caliber and a perforated rubber strap. It retails for $5,450.

Since taking on the ceo position at the beginning of the year, Biver has made it his mission to reference the brand’s heritage, but also push it forward. Earlier this year, Tag Heuer revealed that it’s working with Google and Intel to launch a Swiss smart watch, which it will unveil in New York Nov. 9.

“When I looked at Tag Heuer, I found that we needed to connect the company to the future,” said Biver. “So the past suddenly becomes important and it makes you afraid to move. If I’m successful today and I’ve been successful yesterday, why should I change? But sometimes you should change a winning team before the team starts to lose.”

Brady could relate: “I believe in that 100 percent.”