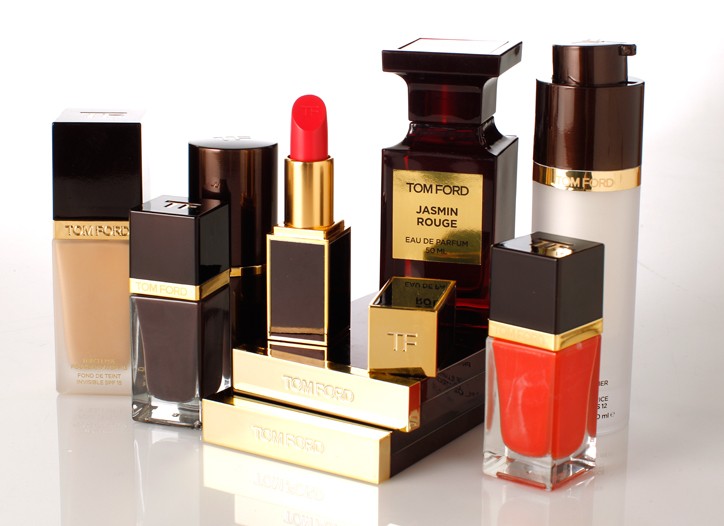 View ALL 5 Photos
LONDON — Tom Ford’s new beauty collection is an ambitious one that incorporates color cosmetics and skin care, but his approach to beauty is surprisingly simple.

“I don’t like B.S. and a lot of promises, and there are a lot of products out there you don’t even need,” said the designer during an interview at his grand showroom and offices next door to Phillips de Pury & Co. in central London. “My brain works in the same way whatever I do. The approach is practical, architectural and I use the same vocabulary whether I’m designing clothing or color cosmetics.”

Ford said he’d wanted to do color for a long time — as far back as when he was creative director at Gucci. Even when he founded his signature brand in 2005, the time still wasn’t right for a launch. “My intention was to do color cosmetics out of the gate, but not everyone else was convinced that I had a voice in color until the lipsticks started selling out again and again,” he said, referring to the Private Blend Lip Color Collection, a group of 12 ultrapigmented colors that launched last year.

“I’ve cared about cosmetics and makeup since I was a kid,” said Ford, who recalls coming home from school in the mid-Seventies, grabbing a box of cereal, and tuning into Merv Griffin’s talk show. He remembers being riveted by Griffin’s more glamorous guests, the Hollywood modeling agent Nina Blanchard, and Vidal and Beverly Sassoon. But not all of those after-school pursuits were benign: Ford recalls an experiment with cucumber slices that took a sinister turn. “When I was 14, I had to be taken to the emergency room because the cucumber slices I had put on my eyes — to camouflage the bags — had made them swell shut. I could eat cucumbers, but my eyes were clearly allergic to them,” he says, wondering aloud what his mother, Shirley, must have thought, seeing her son lying in the bathtub with salad greens on his face.

Four decades later, Ford has developed some more sophisticated beauty tricks. Not surprisingly for a former student of architecture, Ford’s starting point was facial structure and the importance of creating the illusion of symmetry. “You need to understand the face and compensate for the architecture of the face,” he said. He points to eyebrows, which fade and thin out as a woman ages. “A nice thick brow is the key to a youthful look,” he said, adding that a darker, heavier brow can make a high forehead appear less high, while an arched and tailored brow can make a round face appear more regular.

Ford said his calligraphy tip brow pens are so precise, they can be used to draw on individual brow hairs. He’s also a big believer in reshaping the face with illuminating and sculpting products such as the Shade and Illuminate cream duet. “In the old days, this used to be called contouring makeup.”

He said that, overall, he’s more about color than a nude face: “For night, it’s a strong eye and a strong mouth.” Indeed, even his lip glosses — with racy names like Lost Cherry — are packed with pigment. Eyes are most definitely smoky, and the key is to “anchor” intense colors around the eye with a rim of kohl-effect pencil, said Ford, who worked with the British makeup artist Charlotte Tilbury on the cosmetics. The effect is the feminine aesthetic at Studio 54 circa 1978, the full glossy lips and thick brows, the sparkling eyes and the long flowing locks on characters including Jerry Hall, Lauren Hutton, Mariel Hemingway and Bianca Jagger.

Ford is so invested in this collection that he’s appearing in the ads — in sensual poses alongside his glamour girl models. “I’m not in the ads because I’m vain. A lot of people still don’t know who I am, and the product sells better with me in the ads,” he said. “The old designers — Yves [Saint Laurent], Giorgio [Armani] and Ralph [Lauren] — occasionally used to do it.” Ford also uses a lot of the skin care products himself, including the Traceless Foundation Stick in the corners of his nose and eyes, the Illuminating Protective Primer, and the Purifying Crème Cleanser “it goes on like cold cream and the skin feels moisturized and unbelievable.” He sometimes sleeps in the oil-based serum, Intensive Infusion Concentrate Extreme, which he said absorbs straight into the skin.