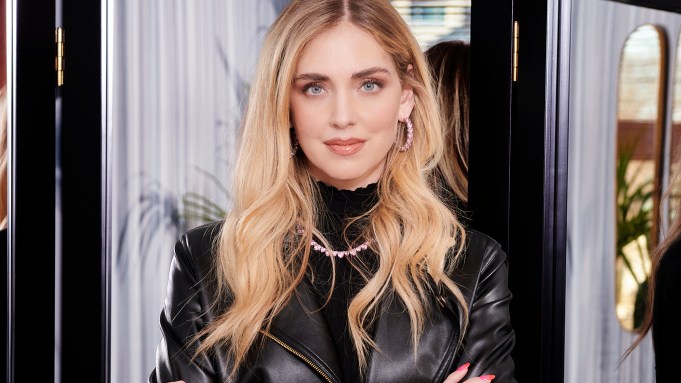 With the ability to amass huge followings, secure brand sponsorships and become ambassadors for some of the top fashion brands in the world, fashion influencers possess the unique skill of being relatable — which has worked out well enough for selling other brands’ clothing that many of these influencers have launched their own lines.

For many, if they’re not launching beauty brands, starting fashion labels has been a logical next step.

Here, WWD looks at nine fashion influencers who have tapped into their own personal brand to launch a collection of clothing.

Italian blogger, businesswoman and designer Chiara Ferragni has, over the years, expanded her blog, The Blonde Salad, created back in 2009, into a mega-influencing empire.

She launched her fashion label the Chiara Ferragni Collection in 2013, first as a shoe line that has since expanded into a broader offering. Now the collection includes clothing, accessories, swimwear, makeup, childrenswear and jewelry; often embellished with the brand’s signature eye logo. Starting in 2017, Ferragni’s namesake clothing brand increased its global distribution by opening up a series of flagship stores in Milan, Paris, Shanghai and Hong Kong.

Ferragni now has a growing Instagram audience of more than 27 million followers, and, also in 2017 she secured first place in Forbes’ “Top Fashion Influencers” list in 2017.

Blogger turned fashion designer Aimee Song started her Song of Style blog back in 2008 and has since parlayed it into a platform — a website, YouTube channel, a spot for Song on Forbes’ 30 Under 30 List in 2016 and two books, the first of which, “Capture Your Style” made it to The New York Times’ best seller list.

With all that influencing prowess, Song debuted her clothing brand, Song of Style, in 2019, which she created in partnership with women’s clothing retailer Revolve. The launch was unique in being Revolve’s first in-house influencer brand.

Now, Song of Style features more than 200 pieces of its collection on Revolve as well as a partial collection at Shop.songofstyle.com (which Revolve operates). In describing the brand, Revolve’s site says: ” The Song of Style girl is understated yet elevated. She’s not consumed by trends, but instead focuses on timeless pieces. She is energetic, arty, bold, and colorful…just like founder Aimee Song.”

Arielle Charnas created her blog, Something Navy, as a style blog in 2009 and had developed it into a clothing line by 2020. (Before then, according to a Forbes article, an early link with Nordstrom in 2018 saw $4.4 million in sales in 24 hours).

Something Navy, which the brand website describes as “a celebration of personal style, thoughtfully designed for real women who want to add something elevated, something aspirational, and something classic to their everyday lives,” includes women’s apparel, childrenswear, swimwear, accessories and home decor. Pieces in the collection include wide-leg jumpsuits, minidresses and drawstring short sets.

The clothing line also has a series of boutique brick-and-mortar stores in New York City and California. Initially set to launch in March 2020, the brand was delayed for months due to Covid. Around that time, Charnas also faced backlash for retreating to the Hamptons in mid-March 2020 following her positive Covid-19 test, in spite of the stay-at-home orders that were in effect. Now, Charnas, currently has more than 1 million followers on her Instagram page and more than 300,000 followers on the brand’s Instagram account.

A post shared by Body By Raven Tracy (@bodybyraventracy)

Raven Tracy, model and influencer to more than 2 million followers on Instagram, launched her namesake clothing brand Body by Raven Tracy in 2018 as an ode to body positivity.

As a curvy model, Tracy, has worked with brands including Adidas, PrettyLittleThing, Naked Wardrobe and has collaborated with brands like True Religion — but has still faced adversities, including self acceptance and challenges with social media versus reality. However, she has parlayed these personal experiences into a platform, complete with clothing line, focused on positivity in all forms.

The brand, which has been worn by Kylie Jenner, JT from hip-hop rap duo City Girls and Lori Harvey, offers size-inclusive (with sizes XS to 4XL) swimwear and loungewear. Body’s most recent capsule drop on June 17, called Goddess Swim, features hand-painted artwork (digitized and printed onto the final garment) of the female body on bikinis and tankinis.

On the site, the brand says its goal is “to continue celebrating our community and building our platform to become the leading destination for all things relating to you, starting right here with body positivity.”

Rumi Neely, once a blogger for the site Fashion Toast (which she started in 2008), debuted her own apparel line, Are You Am I, in 2014.

The clothing line’s first drop was done in collaboration with fashion retailer Revolve as a holiday pop-up shop in Los Angeles and is now sold from its own site. Are You Am I consists of airy, dainty pieces that reflect California native Neely’s everyday style, including lace appliqué dresses, open-back crop tops with puffed sleeves and minimalist gold hoops.

The brand champions slow fashion, producing all pieces in Los Angeles where it says it always pays workers a living wage. As far as the Are You Am I ethos, the brand notes on its website: “We release pieces that exist outside of trends and stand alone, as opposed to collections, so that we can bring an array of ideas to life in only a few weeks. We value slow fashion over mass-production so that each quality piece is worthy of the investment and loved forever.”

New-York native Danielle Bernstein launched her blog WeWoreWhat in 2010, initially to showcase daily NYC fashion, but has since developed it into a multifaceted brand of the same name. Her 2020 autobiography “This Is Not a Fashion Story” is a New York Times’ bestseller, she made the Forbes’ 30 Under 30 List in 2017 at just 24 years old, and launched her clothing line WeWoreWhat in March 2020, offering the pieces exclusively through Macy’s until late 2020.

However, even with a seemingly successful clothing line and more than 2 million followers on Instagram, the fashion influencer has not been immune to controversy. Bernstein, on multiple occasions, has been accused of copying work from small designers and labeling them as her own, with the most recent allegation happening in March 2021, after Ngoni Chikwenengere, the founder of small apparel brand We Are Kin accused the influencer of copying her silk strappy maxidress.

Bernstein, as she did with previous accusations, denied stealing the design, and on an Instagram story stated “there will always be something” people “can say looks similar.”