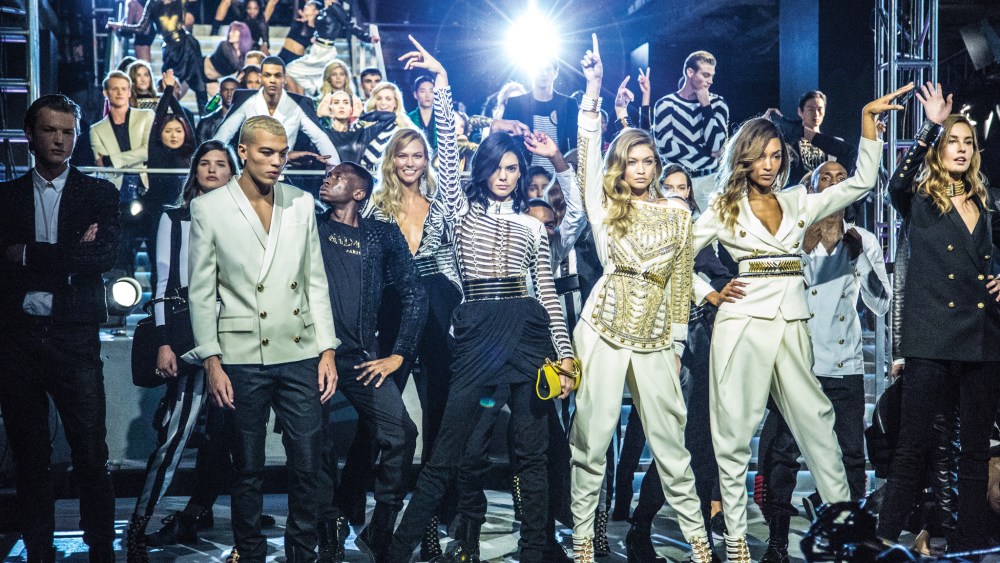 In the last 18 months, maybe less, the world of modeling has been rocked by a new era of girls who are more than pretty faces: Kendall Jenner, Gigi Hadid, Karlie Kloss, Cara Delevingne and Joan Smalls.

“The social media models,” said Julie Mannion, president of creative services at KCD, who works with major brands on casting and show production. Indeed, Instagram has been critical to the new generation of hugely famous models who are celebrities in their own right. To a great extent, they are self-created. Or selfie-created.

Less than two years ago, there were approximately two models capable of holding mass public interest and the interest of fashion’s insular inner ranks at the same time: Gisele Bündchen and Kate Moss. They generated headlines with their good behavior and bad, booked major editorials, covers and campaigns and topped the Forbes’ Highest Paid Models list year after year. (Bündchen has been perched at number one on Forbes’ list for 10 years running, pulling in $44 million in 2015.)

Moss shot to fame as Calvin Klein’s Obsession waif in 1993; Bündchen, as the antiwaif Brazilian bombshell in the late Nineties. Two model generations had come and gone without producing a real star.

Sure, there’s always the high-earning T&A of the Victoria’s Secret club, of which Bündchen was famously a member from 2000 to 2007. Otherwise, fashion had been stuck in an anemic moment of pale, generic Eastern European girls. And not all waifs are Kate Moss.

The rise of the superskinny, “heroin chic” look in fashion paralleled to some degree an opposite direction that would dominate editorial for the better part of two decades. In 1994, InStyle launched to great fanfare the celebrity-as-cover-star as an essential part of its premise. Though the actresses and musicians it began profiling were more famous than most models, they were positioned to be relatable. Heroin chic became at first increasingly controversial and then tired, while the public’s fascination with glam celebrities kept escalating. Before long, they had muscled in on the models’ traditional turf, and the celebrity cover became the industry standard.

The pendulum is swinging back. More correctly, it’s swinging across a landscape now infiltrated by a cadre of savvy models orchestrating their own celebrity ascents. For its biggest issue of the year, Vogue put Kloss, Delevingne and Smalls on its September 2014 cover — typically reserved for a celeb with a project to promote (Beyoncé took 2015’s September cover) — declaring them “The Instagirls!” More recently, the riptide of social media, reality TV, personality-as-business model and designers’ obsession with the new brought ashore Jenner and Hadid. They are unavoidable in paparazzi shots, editorials, campaigns, runways and, most of all, Instagram.

“They come with an incredible ability to relate directly to the client and for a lot of the brands, especially the big brands, that is such an extra-incredible opportunity,” said Mannion of Jenner and Hadid, whom she considers the top two players for the moment. “They give instant personality, and both of them happen to have really good personalities.”

Kloss and Delevingne are in the same conversation but to a different degree.

Kloss and Delevingne came up through traditional runway and fashion channels, even though Delevingne hails from a semifamous English family and has expressed diminishing interest in modeling as her acting career gains traction. Kloss’ entrepreneurial branding approach to her career has been obvious for a while. She has a vegan, gluten-free cookie line, Karlie’s Kookies, with proceeds benefiting hungry children, and this summer started Kode With Karlie, which awards scholarships to young women to learn how to write computer code. In July, she launched her YouTube channel, Klossy.

But Jenner is the genetic triumph of the world-dominating Kardashian family enterprise, their lone member with a seemingly natural physical predisposition to modeling. It has been leveraged considerably, going into high gear over the course of 2014-15. Riccardo Tisci got behind her, Anna Wintour got behind her and, last year, Estée Lauder got behind her with a highly coveted beauty contract. Hadid was famously discovered at age two by Guess’ Paul Marciano, who is known for his eye for blonde bombshells, including Anna Nicole Smith. If not as over-the-top as Smith, Hadid shares some of that curvy, vampy glamour that elite aesthetes often look down their noses at, but is experiencing an uptick in popularity dating back to fashion’s jiggly embrace of Kate Upton. Hadid’s profile has also been bolstered by her minor role on “The Real Housewives of Beverly Hills,” the Bravo franchise of which her mother, the former model Yolanda Foster, is a cast member. (Hadid’s younger sister Bella is also a model; 1.9 million Instagram followers.) Then, last year Tom Ford put Gigi in his fall collection campaign and his Velvet Orchid fragrance campaign. The bandwagon quickly boarded.

Jenner also had 16 covers this year, including Paris Vogue’s October issue, GQ’s May issue and Love Magazine’s spring issue with Delevingne. Her 15 campaigns since January include Calvin Klein Underwear, Topshop and Marc Jacobs.

In some ways, Kloss and Delevingne outrank Jenner and Hadid. Delevingne was Forbes’ second-highest earner behind Bündchen in 2015 at $9 million for 2015. Kloss trumps them all in terms of her year in campaigns (25) and covers (17).

This year, Kloss booked Vogue’s March cover with her best friend Taylor Swift, and Delevingne earned a solo Vogue cover in July. Neither Hadid nor Jenner has scored an American Vogue cover yet.

“We were never fascinated with actresses or athletes. Always supermodels,” said Ed Razek, Victoria’s Secret’s chief marketing officer. “[Brands] would be crazy to ignore the added reach that socially savvy supermodels can bring.”

Adopting the buddy system has been instrumental in the reach of these girls. Jenner, Hadid and Delevingne have positioned themselves as best friends, constantly posting with each other on Instagram. Meanwhile, Kloss is a part of Swift’s inner circle, which the singer extended to Hadid and Delevingne for her blockbuster all-female “Bad Blood” video.

The clique behavior has had a multiplier effect in terms of popularity not seen since the Nineties supermodel heyday of Naomi Campbell, Christy Turlington, Linda Evangelista and Cindy Crawford. At least one of that elder brigade may be inspired by the momentum of the new gen. Crawford has spent the fall raising her profile in conjunction with her book tour for her Rizzoli coffee-table tome, “Becoming.” She, too, had a cameo in “Bad Blood” — as the headmistress.