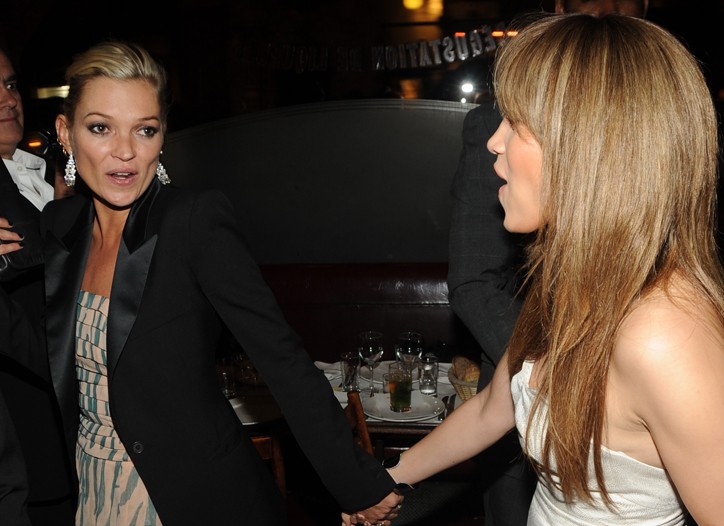 New York hasn’t seen a retail opening like this in years.

The long-awaited unveiling of Topshop-Topman on Thursday went off with an extended flourish as a queue of about 500 predominantly Pretty Young Things wrapped clear around three city blocks. They screamed, they yelled — some had even skipped school to witness the event. Others had been waiting since 7:45 for the 11 a.m. opening. No doubt the waiting was somewhat alleviated by Topshop staffers distributing cheese biscuits and water to everyone, while neighboring Madewell had set up a coffee stand.

“This is it,” said Topshop owner Sir Philip Green, upon which he and Kate Moss (who seemed the most anxious of all, biting her nails) stepped up to the giant silk screen that concealed them from the crowd awaiting outside. As it lifted, there was a roar and a shower of confetti. Moss seemed to loosen up, mugging for the photographers in her green chiffon gown — and leather Barker jacket for some edge — from the collection she designs for the retailer.

“This is exciting. It’s great,” Green said. Just a little later, he was seen hugging Steven Roth, chairman and chief executive officer of Vornado Realty Trust, which provided the 40,000-square-foot site at 478 Broadway. Asked if he plans to provide a second location for Topshop, Roth replied, “For sure. For sure.” He declined to specify where that might be, but one real possibility is 34th Street, where Vornado owns much property.

“I’ve never been to Topshop, but I’m always shopping it online,” said twentysomething Sophie London, who said she waited an hour and a half to get in, and like many surrounding her, had been intensely curious to see the British-based Topshop’s first U.S. emporium. Her conclusion: “It looks awesome.”

Twenty-five-year-old Erica said she waited since 8 a.m. to get in. “I love fashion. I love Topshop,” she explained.

The controlled chaos was little surprise considering Green had marshaled all the hype he could for the store, holding not one but three parties to mark the opening. As to why there were three, the question was answered by the clothing honcho’s speech on Wednesday night at the second bash. In front of a crowd at Balthazar that included Jennifer Lopez, Kate Moss, Marc Jacobs and fellow billionaires Ron Perelman and Steve Wynn, Green brandished a New York City permit. “This piece of paper came this evening and actually is the permit that finally allows us to open the store. It’s only cost us 24 million three hundred thousand dollars,” he announced to applause. “It’s going in a frame. And I’m going to send it to Mayor Bloomberg and say, ‘Thanks very much.’”

If there’s something seemingly anachronistic about a retailer throwing this many soirees in 2009, at least what it’s selling is au courant, pointed out Kelly Klein. “I’ve been waiting for this store to open for two years,” she said while perusing the goods on offer before dinner. “I think they are opening at exactly the right time. These are the clothes we all want to buy right now. It’s cool and young — and cheap.”

In another corner, Julia Restoin-Roitfeld picked up a new feathered miniskirt. “It’s so cute that I’m sure everyone got it,” she said, raising perhaps the only concern that Americans expressed about the arrival of the brand. “It used to be that no one would be able to get the clothes because they were in England. Now everyone will be able to get them,” pointed out one fashion editor.

Meanwhile, Lopez and Marc Anthony got their own tour of the four-floor store. It was only Lopez’s second time in a Topshop, but she had caught the fever. “I love it. It’s amazing,” she said.

At the dinner afterward, she and Moss made fast friends. They grabbed a corner seat, quickly joined by Jacobs and Lorenzo Martone. Meanwhile, Daphne Guinness professed to being a Topshop fan despite her penchant for couture. “I go with my daughter to buy T-shirts, miniskirts, shorts, slacks — everything.” (The Brit fashion plate spent much of the rest of the evening canoodling with hotelier André Balazs.)

After plates were cleared, Sharon Jones and the Dap-Kings gave a rollicking performance that had Alexander Wang, Zoe Kravitz, Rosario Dawson and Veronica Webb bopping on their banquettes. Then Jennifer Hudson took the mic. If she was paid for her appearance (a rumored $130,000), she earned every penny. “They don’t make the [shopping] bags big enough at Topshop,” she said. “I always end up spending too much money. If I could be there tomorrow, I would,” she continued. “I’d be all up in that Topshop.”

As she sang, she spotted Lopez and Anthony. “Oh, I didn’t see y’all there,” she said, before trying to convince them to sing a few notes of Aretha Franklin’s hit “Something He Can Feel.”

“Kate can sing,” shouted Lopez as Moss hid behind her hands.

“Get up Jennifer, I’m asking you,” said Hudson. “Give us something we can feel.” The diva acquiesced and hit a note so high that it got everyone out of their seats and shouting.

The evening ended with a standing ovation after Hudson got the whole too-cool-for-school fashion crowd to sing along to her hits, “Love You I Do,” as well as “And I Am Telling You, I’m Not Going.”