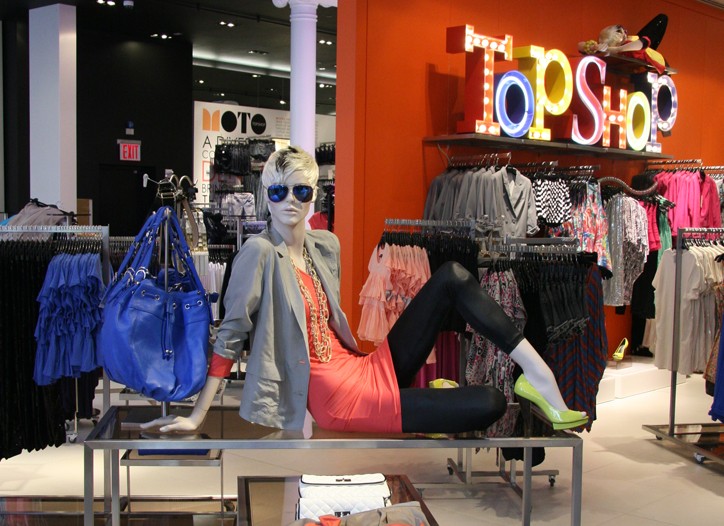 Topshop and its over-the-top rock ’n’ roll merchandising have finally arrived in SoHo.

It’s the chain’s first store in the U.S., and among the most anticipated retail openings in years. SoHo hasn’t seen such a retail phenom since Bloomingdale’s opened its annex for contemporary fashion in 2004.

“This is genuinely the best store we have ever built,” said Sir Philip Green, the flamboyant owner of Arcadia Group, parent company of Topshop and its men’s sibling Topman, during a preview of the site Monday morning. “We see this as a launchpad for a business in America.”

Asked if he is close to announcing a second U.S. site, Green replied, “There is nothing cooking as we speak, but who knows? By Friday, there might be.”

Topshop is milking the opening, staging a barrage of parties and dinners for media and socialites this week in advance of the debut, and then a high-octane ribbon cutting with Kate Moss on Thursday. Moss has been doing an exclusive collection for Topshop since 2006 and launches her spring line in tandem with the SoHo opening.

In addition, a Topshop van has been driving around New York handing out goody bags and gift cards worth $5 to $500.

Mirroring the Oxford Circus flagship in London, the four-level, 40,000-square-foot space, with 28,000 square feet for selling, is an eyeful of energetic, packed merchandising with about 2,000 stockkeeping units, a broad price range from moderate to bridge, and dozens of mannequins and forms, either dangling from the high, 30-foot ceilings or sitting atop the alcoves. It’s a wide store with columns and escalators, huge colorful illustrations of London icons, and theatrically lit Topshop marquees. Above all, it’s the product, and not so much the architecture or decor, that does the talking.

For a business that’s built on a strategy of selling irreverent, youthful clothes, and long inspired by the hip music scene — there’s even a DJ booth that will be playing music on busy shopping days and special events — there’s a serious intent to sell out on its vast array of items fast and replenish with new fashion items rather than reordering. The plan is for daily deliveries and 100 or so new items a week, so the customers keep coming.

And despite the recession, there’s nothing safe in the approach or basic in the collection — even the classic cardigans insist on a fashion twist or two, and the Liberty prints appear on unusual bubble silhouettes.

In another break from retail tradition, Topshop will have none of the ubiquitous markdowns seen everywhere in retailing. The company stages only four sales a year and otherwise won’t price promote, though the store will be offering students a 10 percent discount.

And a long one at that, with the store originally expected to open last fall but delayed by a flood, a fire and construction issues with the city. “We learned we couldn’t wake up in the morning without needing another new permit,” Green said.

Despite the hurdles, Green said he kept the costs in the $20 million to $25 million range. It’s Topshop’s first overseas store that’s owned, not franchised. The retailer has been on an aggressive expansion program in the last few years, opening more units not only in the U.K. but also in continental Europe and Russia.

In the New York flagship, each selling floor is 6,000 to 7,000 square feet, with Topman for men’s wear on the basement level. Topman includes a Lens boutique for contemporary wear and Topman’s runway looks showcased during London Fashion Week; a revolving shop to highlight trends like trenchcoats, blazers, and scarves; a denim area that features skinny jeans in a variety of washes and finishes; a “T room” for graphic and more basic T-shirts; an accessory area for geeky eyeglasses and Trilby hats; an area for Plimsol canvas pumps and other footwear, and a Smart shop for suits.

In Topshop, on the main floor, front and center is the big trend story, which is currently themed Glory Days, a post-War nod to florals, stripes and “Englishness,” as Homer noted. On the mezzanine is the DJ booth, and on two, right off the escalator, is a 500-square foot “Boutique” featuring runway looks and designer collaborations including Jonathan Saunders, Richard Nicoll and Preen. At the end of April, Topshop will introduce a line by Barbara Hulanicki of Biba fame. Nearby is the 700-square-foot Kate Moss shop with about 60 percent dresses including sequined, sexy styles and long chiffon tiered dresses with Liberty prints, as well as daywear pieces such as jersey tops and statement jackets.

The third level features the “Voodoo” shop with darker, cobalt and grayish items; lingerie, and the most dramatic element — the shoe shop, which has the advantages of three dumbwaiters pulling up styles from storage and being naturally backlit by the tall windows overlooking Broadway. The shoe area is filled with colorful platforms with metallic embellishments and plenty of height.

Also housed in the store is a 1,500-square-foot media and event space, and to facilitate the selling eight personal style advisers in women’s and two more in men’s.

Last year, before the recession hit, sources estimated the flagship’s volume at $30 million to $40 million. Asked about the projected revenues, Green replied: “It’s impossible to know, but we have shipped in a lot of inventory. This is a learning curve. Am I nervous? Absolutely not. If we do our job well, people will shop here. You get a ‘wow’ feeling, even when the store is empty of shoppers. Imagine what it will be like with people shopping.”

He said business overall at the $1.8 billion chain is OK, in the face of the dismal economy. “I’m almost embarrassed to say it’s OK.…We can sell two-for-$18 jerseys and a $500 dress within 15 feet of each other. That’s the secret. We have something for everyone.”