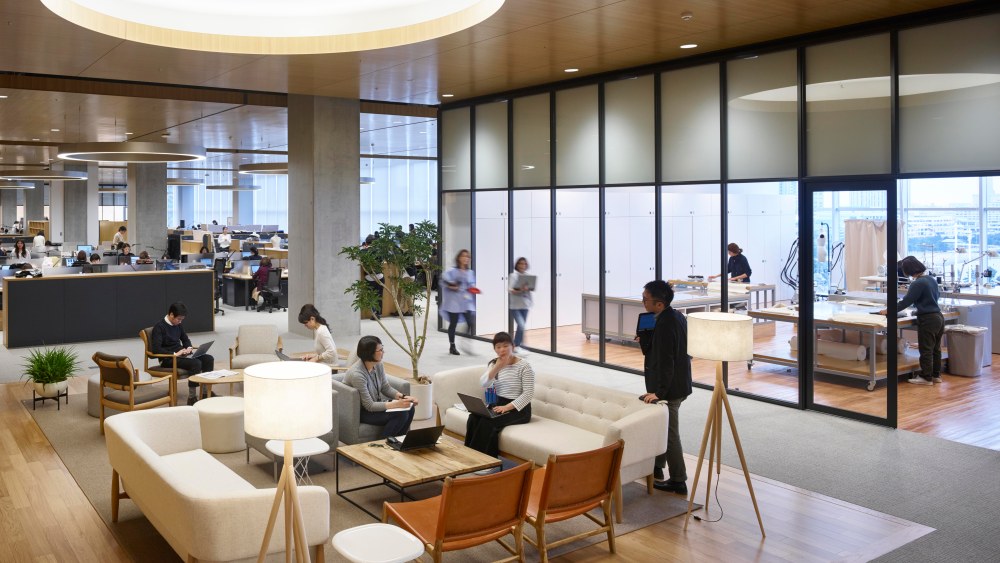 TOKYO — Uniqlo is no longer an apparel company. It is being reborn as a “digital consumer retailing company.”

That’s according to Tadashi Yanai, chairman, president and chief executive officer of Uniqlo parent Fast Retailing, who on Thursday unveiled what he described as the first step in Uniqlo’s rebirth — a new, 188,000-square-foot headquarters here.

The sprawling complex on the sixth floor of the company’s warehouse and distribution center located on an area of reclaimed land in Tokyo Bay is dubbed Uniqlo City and is currently home to some 1,000 employees working in areas ranging from design to marketing. The open-plan format, high ceilings and floor-to-ceiling windows with views of the Tokyo skyline are designed to create an environment that fosters creativity and collaboration. Uniqlo is calling the space its “global innovation center.”

The ceo said the new office will act as Uniqlo’s global innovation and creative center, providing customers with the best possible services and connecting them both with the company and with the rest of the world.

“By connecting with customers, leaders, artists, creators and innovators around the world, we will make a new kind of Japanese company throughout the world. That’s our initiative,” Yanai said.

As its name suggests, Uniqlo City is modeled after a metropolitan area. Designed by Brad Cloepfil of Allied Works Architecture, it includes a central “street” that connects six work lofts with other spaces such as a creative studio, meeting rooms, informal lounge spaces, a café area and a coffee shop. There is also a library space that currently contains some 3,000 volumes (which will be expanded to some 22,000 in the future), a “great hall” where meetings can be held between all members of the office, and a room called the “answer lab,” where various presentations and workshops will be held in an effort to promote innovation and the sharing of ideas.

Uniqlo also said Thursday that it has upgraded its online store in Japan. The new e-commerce site now stocks exclusive sizes, designs, colors and patterns for a total of some 22,710 items for the spring and summer collection alone, more than any other individual Uniqlo store in the world. The mobile platform has a newly revamped interface that has the navigation menu at the bottom of the screen, making it easier for customers who shop with just one hand using their thumb.

Other features of the new site include the option to shop entire looks, and the ability for customers to customize semi-tailored shirts and jackets to their specifications. Orders can be shipped to the customer’s home, picked up from a Uniqlo store — where items can be tried on and immediately returned if they don’t fit — or picked up from one of over 43,000 convenience stores throughout Japan. Customers can also check stock levels at their local Uniqlo store before visiting in person.

The new digital initiatives are being led by Rei Inamoto of Inamoto & Co., a New York-based “business invention” company. The company is also currently testing a service called Uniqlo IQ, which uses artificial intelligence technology to provide customers with a user-friendly, intuitive shopping experience. Uniqlo said it hopes to officially launch the service in both the United States and Japan soon.