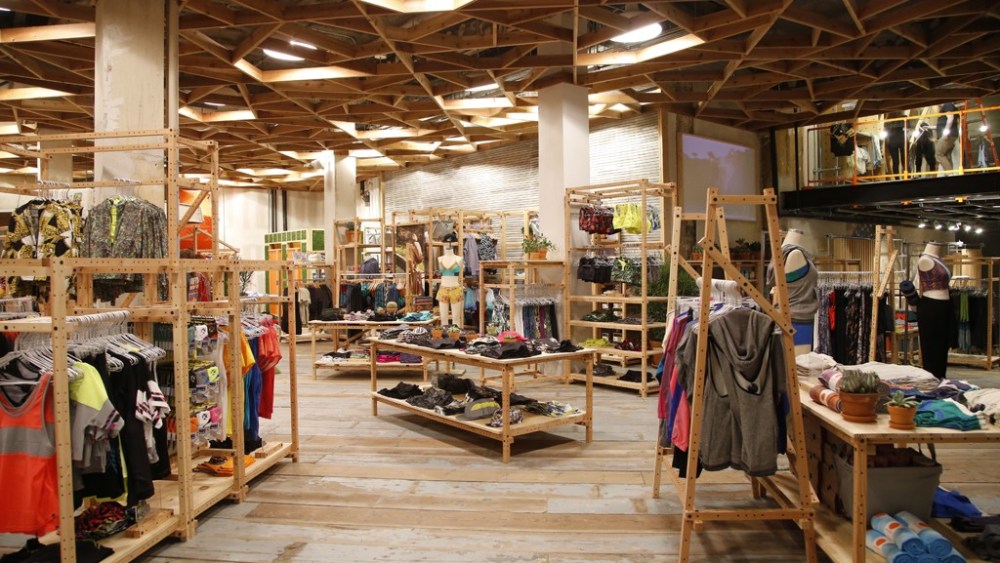 NEW YORK — The biggest Urban Outfitters in the world has taken up residence beside the largest department store in the world, on Broadway between 35th and 36th Streets.

At 57,000 square feet, the new Urban flagship won’t make a dent in the overall business at Macy’s Herald Square, but it could impact Macy’s Impulse department and the Millennial customers the department store has been working hard to cultivate.

“They do $1 billion next door, so I think we’ll do nothing to them,” said John Hauser, chief officer of brand experience at Urban Outfitters Inc., estimating that the flagship will do $1,000 in sales a square foot. “It’s hard not to be dwarfed by Macy’s.”

But for the younger set that Macy’s is appealing to, Urban has a lot in store.

There’s a 2,000-square-foot, full-service hair salon, Hairroin, with a full-time barber on duty, that offers 6 a.m. blowouts so customers can get their hair done on the way to work. A large coffee bar operated by Intelligentsia, a Chicago-based company with a store at Manhattan’s High Line, offers fresh-roasted coffee as well as food and snacks. Hauser said there will be more of these partnerships and “hosting independently operated companies.”

Urban has been experimenting with large-format stores in an attempt to engage customers and get back on the growth track. The Urban Outfitters brand’s financial performance has been weak. First-quarter earnings were down 20.4 percent and comps fell 12 percent.

With three enormous floors to fill, Urban Outfitters executives let their imaginations run wild. “How do you fill this much space?” Hauser said. “We thought, What is the customer into? We partnered with the guys at Bikestock in Bushwick, [Brooklyn].” It’s a bike vending machine and rack. “It sells tickets to local shows and everything else bikers need, from water bottles to M&Ms.”

Without Walls, Urban’s new activewear concept, now in nine stores as shops-in-shop, finds full expression at the flagship. The department, which has a full-size trailer as a prop, consists of 50 percent Urban apparel and 50 percent branded merchandise, such as New Line, Undefeated and Onzie.

Urban’s first beauty department is a 1,500-square-foot area filled with smaller brands such as Fig & Yarrow, Stila and Klorane. “Urban’s doing beauty,” Hauser said. “We’re the largest U.S. distributor of Korean beauty products.” The area is staffed with trained makeup artists. “This space it’s about how Urban is rethinking retail,” Hauser said. “The beauty shop is a great advantage. We’re creating a destination.”

Across from beauty, there’s an eye shop stocked by Tortoise & Blonde, an online retailer with two stores that makes value frames, priced around $50.

Some elements of the flagship were inspired by Space Ninety 8, a 37,000-square-foot store in Williamsburg, Brooklyn, owned by the group, that opened earlier this year and serves as a type of laboratory of ideas for the retailer. The Urban flagship has the same raw feel and apparel displays framed with rope and macramé.

The Broadway space, a former Conway store, was in shambles when Urban executives set eyes upon it. Hauser saw through the neglect and envisioned a wide-open staircase, exposed ceilings, klieg lights, wood and concrete floors and columns, for architectural interest.

“We wanted to get legit in shoes,” Hauser said. A “proper” 3,000-square-foot shoe shop on the second floor, Urban’s first, features brands such as See by Chloé, Frye and Swedish Hasbeens.

In addition to a large display of women’s wear on the ground level, the second floor houses women’s denim and a series of “shops” merchandised by look. An adjacent large accessories shop sells Urban styles and Marisa Haskell, among others.

Urban’s strategy of adding upper-end brands has paid off in intimates, where Cosabella, Impish Lee and L’Agent by Agent Provocateur complement the company’s private-label selection.

Men’s, on the lower level, includes national brands such as Zanerobe and Drifter, as well as private-label apparel, a large shoe shop and a souvenir shop. For the opening, Converse held an event where men could choose a pattern and have it printed on a pair of shoes. Events will be a big part of the store, Hauser said. For the Record, a new Urban program that brings touring artists to stores, will hold vinyl signings with Dev Hynes of Blood Orange and Gia Coppola.

Hauser said additional large-format stores could open down the road. “We’ll learn from this,” he said. “If the customer loves it, we’ll do more of them.”