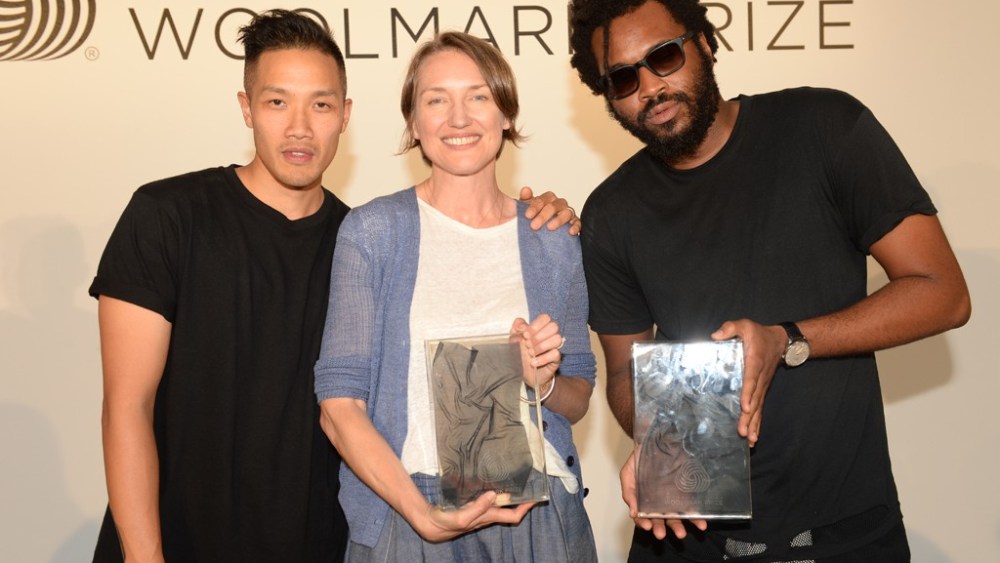 Both the women’s wear and men’s wear designers, respectively, will receive $47,000, plus the opportunity to represent the U.S. in the international final. The final will be held during London Collections: Men in January, and the women’s wear in Beijing in March. Over the next six months, the winning designers from the U.S., Asia, Australia, Europe, the Middle East and India will develop a capsule collection in merino wool.

The designers will compete against international finalists for a prize of $95,000 and the opportunity to be stocked in stores such as Harvey Nichols in London, Colette in Paris, 10 Corso Como in Milan, Joyce in China, Isetan Mitsukoshi in Japan, Saks Fifth Avenue in New York, David Jones in Sydney and Mytheresa.com in Germany.

“I’m thrilled,” said Marcia Patmos of M. Patmos, upon receiving the Woolmark award. “I would like to take a trip to visit my retailers and customers and do personal appearances. It’s really important to connect with my customers,” she said. Patmos, who launched her namesake collection in 2011, produces in New York, New Jersey, Bolivia and China. Patmos was previously the winner of the Ecco Domani Fashion Foundation Award in 2011 and earlier was the cofounder of cashmere brand Lutz & Patmos. She said she’s done a lot of work with wool over the years and was excited to contrast high-tech with handcrafted design. “It was such an honor to be alongside these other amazing designers, all of whom showcased such unique uses of wool.”

The other women’s finalists were Jonathan Simkhai, Nonoo, Rosie Assoulin and Whit.

Dao-Yi Chow and Maxwell Osborne, who design Public School, were equally pleased about winning the men’s wear award — the first time men’s has been included in the prize. “It’s a fiber we use all the time. It’s huge just thinking about the U.S., and battling it out for the U.S. It’s a really exciting thing in itself,” said Osborne. Public School has been on a winning streak since its founding in 2008. In 2010, the company was the sole men’s wear brand chosen by the Council of Fashion Designers of America to be part of the inaugural Fashion Incubator business development program. In 2013, it received the CFDA Swarovski Award for Menswear. In November, Public School was named the winner of the 2013 CFDA/Vogue Fashion Fund Award.

Osborne said they plan to use the prize money for staffing purposes.

Upon accepting the Woolmark award, Osborne said, “It was a great competition to keep us going forward and push us to go forward and do more. We’re excited to represent the U.S.”

“Hopefully we’ll fare better than the World Cup U.S. team,” added Chow. He also used the opportunity to thank the other designers as well. “You guys helped push us. We discovered the magic of wool and are superexcited to represent the U.S. and go on and bring it home.”

Public School’s winning design was a merino wool coat with a funnel neck complete with a snood and sweater-knit leggings.

Osborne said they chose that particular look because it would encompass everything they wanted to show. “Some looks were tops and bottoms. We wanted to go really conceptual and that top piece is more conceptual, and it’s not retail-ready. It shows innovation and how to play with yarn and play with different techniques in one look,” he said.

One of the judges, Steven Kolb, chief executive officer of the CFDA, explained that it’s a very calculated scoring system with four categories, on a scale of 1 to 25. The designers are judged on sourcing, choices of materials, overall material construction and presentation. And then there’s a lot of conversation.

“Marcia’s was very complete and well thought-out, and Public School had some fun with wool. Both were very much on brand,” said Kolb.

Stefano Tonchi, editor in chief of W, and one of the judges, said about the men’s process, “There was not a lot of contention, but we did have a lot of opinions about who should represent the USA. That was one of our goals, to get an international winner from the U.S.” He said they tried to figure out who would work better in the international context. Asked if it was a unanimous decision to choose Public School, Tonchi said, “Yes, very much. I think it was an interesting choice and we all agreed that the U.S. should be about innovation and creativity and setting new rules.”

Tonchi felt that Public School represented something different. “They’re opening a new chapter with the silhouette of men’s wear. I was just saying how the most important men’s wear designer in the last 10 years is Thom Browne, but he’s American. He changed the silhouette. Someone told me the other day that leggings are the new short pants.”

Nick Wooster, who was at the event, was asked whether men might start wearing leggings thanks to Public School.

“Only if they have varicose veins. Kidding. Women have figured out leggings come with a multiple of sins and maybe men will as well. All I know is they’re extremely talented and they’re really nice guys. They have star power.”

“It’s a surreal experience to be nominated,” said Weiland. “It was a challenge to be really excited about. We were excited to work with materials that were elevated beyond tailoring. It was a great experience to work with these Italian textiles with the highest merino wool with high twists. I don’t know, we get off on that — not to be vulgar.” Timo Weiland’s design director Alan Eckstein added, “It’s special because it adds to everyone’s careers. It’s one outfit, but it really represents such a nice idea in one sentence. And it’s wool. We’ve based each of our collections off of wool ever since we started.”

Snyder spoke about the judging process. “I was very nervous. It went very well. I learned a lot of things about merino wool.” He said he wanted to show how luxurious merino wool is and how it drapes. “It’s very appropriate for men’s wear. It’s a natural performance fabric. If it gets wet, it keeps you warmer. It also breathes….It was a ton of work and it’s always fun to compete with all your friends. I’m close friends with [the designers at] Public School.”

Rosie Assoulin said she created six looks within two designs. She said her look was a combination of a dress, skirt, pants, halter and poncho that can be unzipped into different looks. “We love zippers. I hope I didn’t cheat on anything,” she said. Assoulin, who has been in business for one year, and has worked with wool from her first season, sells to such stores as Fivestory, Bergdorf Goodman, Kirna Zabête and Jeffrey.

Misha Nonoo, one of the women’s wear finalists, explained that in her design she was able to reverse the knitting process and do vertical stripes. She noted that her company has grown significantly since she started with just jackets and coats. She is now designing a contemporary collection, in addition to eveningwear.