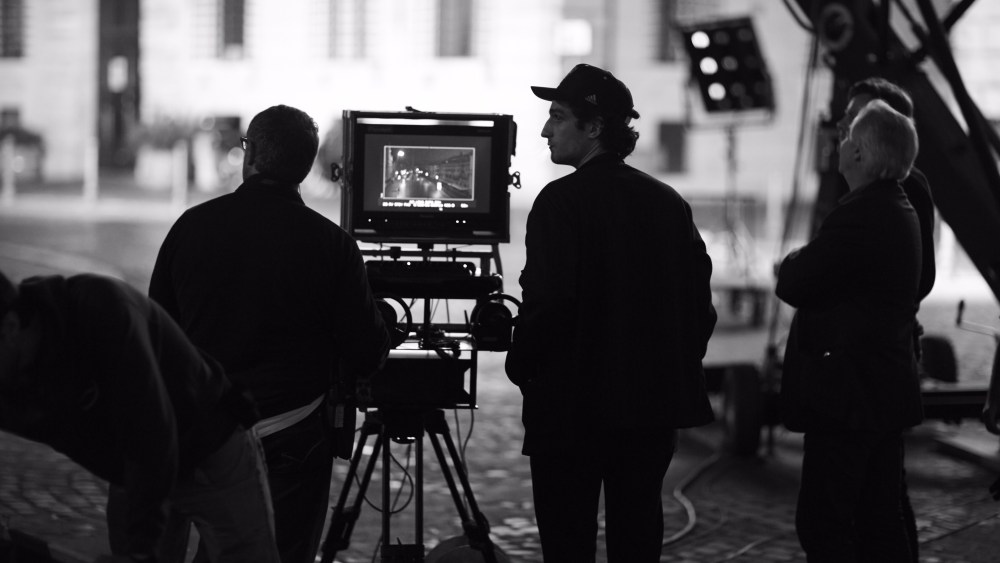 Taking a cue from directors such as Federico Fellini and Michelangelo Antonioni, plus actresses such as Monica Vitti from the Sixties, Valentino’s designers Maria Grazia Chiuri and Pierpaolo Piccioli opted to set the ad in Rome, the brand’s birthplace.

The scene is enigmatic. From a distance, one sees the actress walking across the empty Piazza Navona late at night. A man’s voice says: “How long has it been since I was last here?” He reminisces about the square, a café that had stood there, then adds: “The last time I was here, she was exactly the same. Maybe it’s her.”

Bergès-Frisbey walks down a narrow street and again, through the lens of the narrator, the viewer sees her but now at a much closer range.

“Maybe it’s her. I recognize you. I know who you are. Please don’t turn around,” the male voice says. “I would recognize you anywhere, perhaps even with my eyes closed. At least you could tell me your name.”

Bergès-Frisbey, in a doorway — studded like the Valentino Donna bottle — turns toward the man and says: “If you knew me, then you know my name.”

“We wanted to give this idea of a contemporary woman who is really faceted,” Piccioli said. “The idea of the movie was to get one moment and one night in Rome, and one meeting between a woman and this man who might recognize her. So it’s like a frame of a movie…with the idea of an intimate Rome. It can be one moment in the life of a man or a woman. It’s something very individual but very universal at the same time.

“We wanted to get this spiritual side of Rome and its emotional side, not a postcard kind of view,” he continued.

They chose Garrel, a director, actor and face of Valentino Uomo to lens the campaign and be the voice of the omniscient narrator.

Valentino Donna is a floral and chypre perfume created with Givaudan perfumers Sonia Constant and Antoine Maisondieu and Valentino’s fragrance licensee Puig. It launched in the U.K. exclusively at Harrods and Galeries Lafayette in mid-July.

Chiuri said Bergès-Frisbey was an obvious choice as the face.

“She reflects, in some way, the idea of women that we like: She has strong character but is romantic and at the same time she’s really independent and a little bit rock ‘n’ roll,” Chiuri said.

“She represents many of the younger women’s generation,” added Piccioli.

To prepare for the part, Bergès-Frisbey was shown the Valentino Donna perfume and bottle, and given some black-and-white images to peruse.

“There were two main films they were inspired by — ‘Roma’ and ‘La Notte,’” she said.

“They had this very precise idea that they followed,” Bergès-Frisbey said. “You saw they [poured] a lot of love into the project and were passionate about it.”

The actress said while not being overly familiar with fashion, she knew Valentino.

“I loved the elegance and simplicity of it,” Bergès-Frisbey said. “It’s kind of less is more.”

The 1-minute-48-second spot will first break on parfums.valentino.com and on Valentino’s Facebook, Instagram and Twitter accounts, and also on some blogs based in France, the U.K. and Italy on Oct. 8.