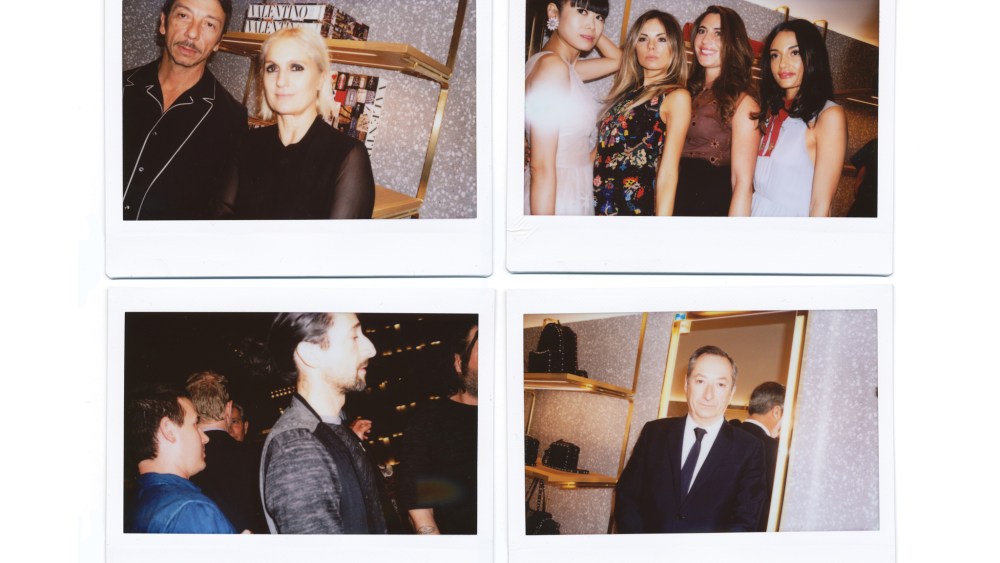 “Time is the new value,” said Maria Grazia Chiuri standing inside Valentino’s Miami Design District store last week. “In these times, everybody goes so fast. We wanted to show that to do something special you need time and human touch.”

She was speaking specifically about the message of the installation by Roman artist Pietro Ruffo that had just been rained out by a cruel torrential downpour that broke just as the performance art piece, which involved two Valentino seamstresses working alongside two artists from Ruffo’s studio to demonstrate patience and handcraft, was scheduled to go on outside the store in Palm Court. It was Chiuri’s and her co-creative director Pierpaolo Piccioli’s first time in Miami for Art Basel, their second stop on a mini U.S. tour that took them to New York, Miami and back to New York for a slew of events through the first week of December.

Ruffo was understandably mopey, but the terri- ble weather, which held through the weekend in Miami, didn’t noticeably phase Chiuri and Piccioli. “It’s a pity,” said Piccioli, moving on. He was in Miami to take in the scene and see the art, hitting Wynwood Walls, Adrian Brody’s graffiti exhibit with Domingo Zapata at Lulu Laboratorium, and JR’s exhibit called “Ellis” at Perrotin Gallery. He then boarded another plane — his third in four days — to New York for Monday night’s Lincoln Center Corporate Fund Gala, at which he and Chiuri were the keynote honorees. The next night, the crew was at Valentino’s Fifth Avenue store for a book signing of their tome “Valentino: Mirabilia Romae.” Then it was ciao — back to Roma for all. Chiuri and Piccioli keep busy. In fact, her explanation of Ruffo’s performance installation, a collaborative commission by the house of Valentino, could have been interpreted as commentary on the ongoing fashion conversation about the increasing demands and subsequent stress on big-brand designers. But Chiuri genuinely did not seem to be complaining, though who could blame her if that were the case? She and Piccioli have emerged as a creative power couple that has driven the house of Valentino into a flush renais- sance. Their output has been consistently remarkable not only in its beauty, craft and relevance but also in terms of keeping pace. The number of collections they’re responsible for in a calendar year totals 14 — four women’s ready-to-wear, four men’s rtw, plus two women’s couture and four Red Valentino. Then there are the accessories, and, on top of everything else, last year they threw in an extra couture collection shown only in New York to christen their gleaming marble shrine of a flagship. People want a piece of Chiuri and Piccioli, whose world-class creative supply has created high-profile demand. No less a celebrity with a brand to boost than Gwyneth Paltrow, whose friendship with the house predates Chiuri and Piccioli’s reign there, enlisted them to work on a collaborative capsule collection for her highfalutin lifestyle venture Goop, which is why Chiuri and Piccioli were hanging out at a mall on the Upper West Side last Wednesday night. Paltrow’s Goop Mrkt pop-up shop, which featured a wall dedicated to the Wonder Woman-themed Valentino x Goop collection, opened at the Time Warner Center in late November, so she gathered her friends, family and vendors to toast the store, as well as Chiuri and Piccioli while they were in the States.

“We worked very hard to become a company that could possibly be worthy of a collaboration with somebody like Pierpaolo and Maria Grazia and everyone at Valentino,” said Paltrow during her toast at the post-store party dinner at A Voce. “We feel so honored that they took the time and their creative power and energy to collaborate with us.” According to Chiuri and Piccioli, they were happy to oblige Paltrow’s request to partner, which came after she attended their couture show in Rome in July. “We’re friends with Gwyneth. People always want to know why we do things and sometimes it’s just simple,” said Chiuri, noting that the same logic when Ben Stiller wanted to announce “Zoolander 2” by taking the finale walk with Owen Wilson on Valentino’s fall runway. “We loved [‘Zoolander’].”

“Zoolander” — and to a different extent, Art Basel and Goop — allow Valentino to reach a broader American audience, which is crucial to the brand. “The United States is important for us,” said chief executive officer Stefano Sassi in Miami. “It’s a great market. It’s a trendy market so it’s a pleasure to come here. It’s the first time the three of us have come to Miami together. It’s cool.” That’s part of the point, too. The extra projects present opportunities for the designers to have a little fun. The clothes in the Goop collection, such as denim shorts with stars on them, graffiti T-shirts and tulle dresses that were sophisticated if a bit teenage (even on Paltrow, who wore one to the party), were far less serious than the stuff of Valentino’s main line, even if the prices were well up in the designer stratosphere. “I would be single if my husband saw that charge,” said Ali Wentworth, the actress and comedian who’s married to George Stephanopoulos, of a $10,500 blue sequined bomber jacket Jessica Seinfeld was trying on at the Goop party. Piccioli’s feelings on the prices: “Fashion is about dreams.”

Increasingly, for him and his partner, fashion is collaborative. Chiuri and Piccioli have embraced the notion and filed it under the idea of working as a “factory,” a term they seem to be using in the Andy Warhol sense rather than a high-volume, commercial enterprise sense, but those aren’t mutually exclusive ideas.

“We really believe that when you work with other people, it’s a nice way to improve your talent, to build something,” Chiuri said. “We are a team because we are two people, but we like to work with people who are creating another thing, like Pietro.” And Paltrow, Stiller and Celia Birtwell, the textile designer with whom Valentino worked for fall 2015.

The biggest group project is yet to come. During the Miami event, the house revealed plans for Mirabilia Road to be inaugurated next May. Done in conjunction with the city of Rome, it will be a 12-kilometer walking trail, marked by a red line through the city’s famous landmarks as well as lesser-known artistic and historic sites. The idea came from private, experiential tours Chiuri and Piccioli set up for guests at their couture show held in Rome in July. “It all started with the idea of giving your guests the chance to experience Rome the way the designers have experienced it,” said Filippo Cosmelli, who worked on the couture project and will also play a major role in Mirabilia Road. “It’s different than just looking at the monuments. It’s discovering the city’s secrets.”

“I’m really involved in Rome,” said Chiuri, who along with Piccioli initiated talks of the Mirabilia Road project with the city. “I love it so much.” With so many roads leading her and Piccioli away from Rome these days, it makes sense they would want to build a new one at home.